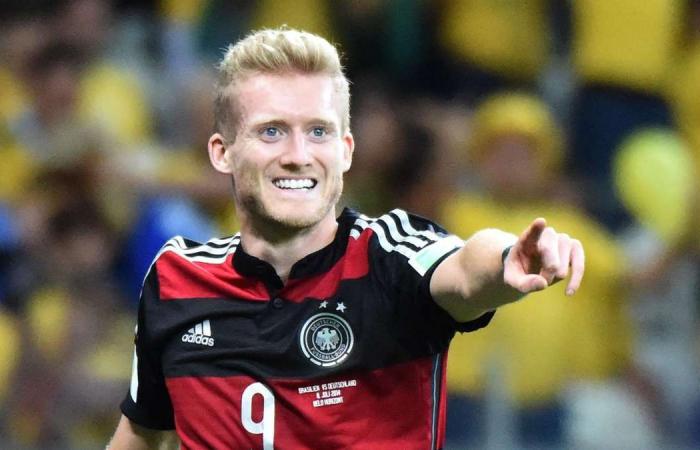 Hind Al Soulia - Riyadh - Andre Schurrle : The Germany winger announced his retirement on Friday, aged just 29. On Wednesday, Borussia Dortmund cancelled the former Chelsea player's contract by mutual consent with a year left to run. Schurrle played a starring cameo role in Germany's 2014 World Cup success, scoring twice in the 7-1 thrashing of Brazil in the semi-finals before supplying the cross for Mario Gotze's extra-time winner in the final against Argentina, both after coming on as a substitute. Getty Images

Eric Cantona: The shock that accompanied the Frenchman's sudden retirement from football in 1997 was the equivalent to waking up and finding your head stitched to the floor. Cantona was the linchpin of United's success in the early 1990s, helping the club end their 26-year long wait for a league title. Though it was typical of the Frenchman - bowing out at the peak of his powers and on his own terms - his decision to retire, age 30, meant he missed out on the club's treble-winning success of 1999. Getty Images

David Bentley: The midfielder broke down in tears on live television as he announced his retirement from football at the age of 29. The former Arsenal, Tottenham, Norwich and Blackburn midfielder started crying during an interview on Sky Sports after he admitted he had “fallen out of love with the game”. The former England international, who won seven caps in 2007 and 2008, but had not played for over a year after a spell in Russia with FC Rostov, said social media had made football boring. Getty Images

George Best: Manchester United and Northern Ireland legend George Best announced his first retirement from football in 1974, just shy of his 28th birthday. By that point Best had already left his mark on the game, making 470 appearances for United, winning the league twice, the European Cup once as well as the Ballon d'Or as Europe's best player in 1968. Best made a few comebacks and even turned some heads while playing in the NASL, but he wasn't ever the same again. He died in 2005 aged 59 as a result of a lung infection and multiple organ failure due to alcohol abuse. Getty Images

Just Fontaine: The French striker's 13 goals at the 1958 World Cup in Sweden is still a record at a single finals. Fontaine, who scored 30 goals in just 21 caps for the French national team, formed part of the highly successful Stade de Reims team that won three league titles and reached the final of the European Cup in 1959. Sadly for Fontaine, he had to retire at the age of 28 due to injury. AFP

Carlos Roa: After starring for Argentina at the 1998 World Cup in France, Roa took time out from football the following summer to take a religious retreat, age 29. Despite reaching the final of the Copa Del Rey and Cup Winners’ Cup and winning the Spanish Supercup at Mallorca, Roa, a practising Seventh-Day Adventist, refused to sign a contract extension at the Spanish club because he believed the world was going to end. When it didn’t, he returned with his tail between his legs to play out the final two years of his contract. He never recaptured the form that earned him 16 international caps, and called time on his career a second time in 2006 following a year at Olimpo in his native Argentina. Getty Images

Hidetoshi Nakata: The skilful midfielder is rightly regarded as one of Asia's greatest ever players, becoming only the second Japanese footballer to play in Serie A when he joined Perugia in 1997. From there he went on to have great success, winning the Scudetto in 2001 with Roma, before winning the Coppa Italia with Parma in 2002. It came as something of a surprise, then, when Nakata, aged 29, announced his retirement after a season on loan in the Premier League at Bolton Wanderers. Was playing under Sam Allardyce really that bad? The former Japan international, who starred at three successive World Cups for his country, went on to become a model and something of a fashion icon in his post-football career. Getty Images

Michel Platini: Another French star who retired young. After winning Euro 1984 with France and winning the Ballon d'Or three straight times between 1983 and 1985, he retired in June 1987, the same month he turned 32. The former Juventus midfielder, who helped the Italians win two Serie A titles as well as the 1985 European Cup, was banned from all football activity by Fifa in in 2015 over a controversial payment of two million Swiss francs (Dh7.3m) that he received from the world governing body's then president Sepp Blatter. Allsport

Brian Laudrup: While his brother Michael is the more celebrated footballer, Brian Laudrup’s career was a huge success, too. The Dane won league titles in three countries, as well as the Champions League with AC Milan, and was a key member of the Denmark team that won Euro 92. Sadly for the skilful winger, he was forced to retire in 2000 at the age of just 31 due to injuries. Allsport

Patrick Kluivert: The Netherlands striker announced himself on the big stage by scoring the winning goal for Ajax in the 1995 European Cup final against AC Milan at the tender age of 18. After six trophy-laden years at Barcelona, Kluivert, who scored 40 international goals, saw his career take a downwards trajectory with spells at Newcastle United, Valencia, PSV Eindhoven and Lille before he retired in 2008, aged 31. Getty Images

Marco van Basten: Another casualty of injuries. The Dutch master retired in 1995 aged 31 after spending two years on the sidelines with an injured ankle. Before then Van Basten had proven himself to be one of the greatest players of all-time, having won two European Cups, three Ballon d’Ors, and scored perhaps the most spectacular goal ever seen in a major final with the winner against the USSR in Euro 88. Getty Images

These were the details of the news World Cup winner Andre Schurrle and others who retired early - in pictures for this day. We hope that we have succeeded by giving you the full details and information. To follow all our news, you can subscribe to the alerts system or to one of our different systems to provide you with all that is new.