After cruel near-misses, an own goal takes Leeds United to the brink of Premier League promotion 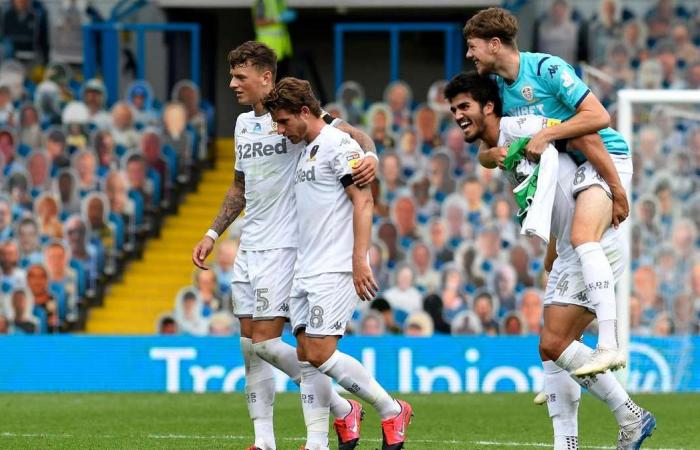 Thank you for your reading and interest in the news After cruel near-misses, an own goal takes Leeds United to the brink of Premier League promotion and now with details

Hind Al Soulia - Riyadh - After 16 years, 15 managers, five owners and three seasons in the third tier, Leeds United are one point away now. They may not even need that if West Bromwich Albion or Brentford fail to win before they visit Derby on Sunday.

Relegated at Bolton in 2004, they could be promoted without playing in 2020 but Marcelo Bielsa, the mad professor of management, is on the brink of a seminal achievement. Leeds’ long exile is almost over. The Premier League beckons.

Few clubs of their stature are stuck in the lower leagues for as long. Leeds snatched a play-off place from the jaws of automatic promotion last season. It amounted to a spectacular, traumatic loss of nerve but, at a club where echoes of the past are ever-present, history has not repeated itself.

Leeds beat Barnsley 1-0 on Thursday to chalk up a 10th win in 12 and a fourth in the row. When supporters were admitted, opposing fans used to taunt them with chants of “Leeds are falling apart again,” but they have not.

Under other circumstances, nervous tension would have abounded among a fraught fanbase at Elland Road. Instead, it felt confined to the animated director of football Victor Orta as Barnsley became a rare team to subject Leeds to spells of sustained pressure. This, if truth be told, was not the greatest advertisement for Bielsa’s often seductive style of football.

Yet his ideas were apparent. There were times when the formation was a Bielsa-esque 3-3-3-1; few others are prepared to be as bold and certainly not with as much at stake. He switched to a back four, yelling “you, centre-back, please,” at Ben White. Gaetano Berardi played three positions in the first half alone but Leeds’ increasingly versatile defenders had to dig in and grind out a victory.

They rarely need such rearguard actions. Bielsa, a manager with more influence and admirers than concrete achievements, has taken a mid-table unit and reinvented them as a passing, pressing team. There were glimpses of excellence when Barnsley were cut open, Gjanni Alioski passed and Patrick Bamford should have sealed victory, but the often profligate striker allowed Jack Walton to save his shot.

One-nil may have felt underwhelming just as promotion without playing could be anti-climactic but, despite or because of Leeds’ size and history, it would be a rare feat.

The last two managers to take them into the top tier, Don Revie and Howard Wilkinson, went on to win the title. Leeds have lost three of Revie’s stalwarts this year, in Norman Hunter, Trevor Cherry and Jack Charlton. There was a minute’s silence for their record appearance maker, who helped them go up in 1964.

Cruel near-misses have been a part of Leeds’ identity since that era but they instead benefited from an own goal here. A diving Mads Andersen headed wide when Barnsley could have gone ahead at one end; thirty seconds later, Leeds led. Bamford’s cutback was inadvertently finished by Michael Sollbauer.

Thereafter, Helder Costa, whose loan became a £16 million transfer last week, was stretchered off with an injury of such seeming severity he looks likely to miss the start of Leeds’ Premier League season.

Barnsley’s Conor Chaplin, Callum Styles and Cauley Woodrow almost equalised and they were enterprising opponents, a team with a similarly ambitious blueprint and one who, had Gerhard Struber been appointed earlier, might not look likely to revert to League One.

Instead, they face promotion-chasing Nottingham Forest and Brentford. There was little to separate Yorkshire rivals here, but they could be two divisions apart inside a week.

These were the details of the news After cruel near-misses, an own goal takes Leeds United to the brink of Premier League promotion for this day. We hope that we have succeeded by giving you the full details and information. To follow all our news, you can subscribe to the alerts system or to one of our different systems to provide you with all that is new.