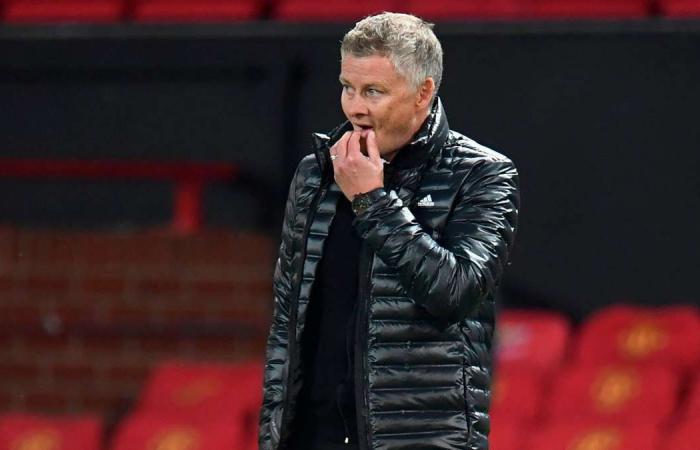 Thank you for your reading and interest in the news Manchester United v Chelsea: Ole Gunnar Solskjaer unhappy with 'unfair' FA Cup schedule and now with details

Hind Al Soulia - Riyadh - David De Gea - 6: Could do little for first goal in his 400th United appearance. Had to be a alert against an impressive foe and made super late save from Redmond, but then beaten at the last. Getty

Aaron Wan-Bissaka - 6: Involved in build up for equaliser. Attacking intent but not quite either Ronaldo when he dribbles. . AP

Harry Maguire - 6: Industrial language used in the world’s first industrial park. More passes than any player on pitch, but at heart of a defence that has conceded two goals in each of their last two home games. PA

Luke Shaw - 6: Drove hard down the left. Came off after 74 after going over heavily on his ankle. Getty

Nemanja Matic - 7: Initially overwhelmed by an excellent Southampton start, but made more tackles and interceptions than any player. Had more touches and was fouled more than any player too. Getty

Bruno Fernandes - 7: Underhit a couple of early first half crosses. Nutmegged Ward-Prowse with a back heel to set up Pogba. Lively. PA

Paul Pogba - 6: Caught out for opening goal and dispossessed again soon after. Steadied up, shot from distance, but not as his best. Like many of team mates, gave ball away too much. PA

Anthony Martial - 8: Chance for an early one on one. Fantastic in setting up equaliser. Then smashed second goal in after going past defender like he wasn’t there for 50th MUFC goal. Best player on the field. Shame there were no fans to be sat on the edge of their seat watching him. AFP

Marcus Rashford - 7: Offside before he put the ball in the net after 15 mins. Onside to score first goal from open play of the restart. Rapid driving forward. Shot close from distance after 55 minutes, superb run and combination with Martial after 68. Best performance since his injury. AFP

Mason Greenwood - 6: Suffered awful first half tackle from Romeu and quieter game than of late. EPA

SUBS: Fred (On for Pogba 63') 6: Replaced Pogba after an hour to stop an impressive Southampton cutting through midfield. . AP

Brandon Williams - (On for Shaw 73') 6: Was getting valuable minutes most games, until he went off after a sickening clash of heads. Reuters

Alex McCarthy - 7: Brilliant stop to deny Martial in first 10 minutes and another good save to parry away a Pogba drive before the break. No chance with goals. AFP

Kyle Walker-Peters - 5: A tough night for the right-back. Suffered a torrid first half after being dragged out of position as Rashford equalised and left for dead by Martial for the second. Booked after break for deliberate handball that stopped Rashford getting through on goal. Getty. Getty

Jan Bednarek - 7: Solid night at the back for Polish defender up against a daunting United attack. AFP

Ryan Bertrand - 8: Excellent performance from the full-back who did really well against an in-form Greenwood. Getty

Oriol Romeu - 7: Midfielder lucky to escape punishment for nasty late challenge on Greenwood in first half, but was key performer for the Saints. Reuters

James Ward-Prowse - 6: Almost gifted Martial opening goal after being caught in possession but rescued by his goalkeeper. Booked for rugby tackling Fernandez in first half. Superb in-swinging corner to set up late leveller. Reuters

Stuart Armstrong - 7: Wonderful control in first half to bring down cross but could only drive straight at De Gea. No mistake a few minutes later when showed great composure to take a touch and put his team one up. Reuters

Danny Ings - 7: The striker was a constant menace to United. Showed great anticipation to dispossess Pogba and begin the move that led to Armstrong's goal. Reuters

SUBS: Shane Long - (On for Adams 64') 6: Half-chance with header but was too far out to trouble De Gea. Reuters

William Smallbone - (On for Armstrong 70') 6: No major impact after coming on. Reuters

Michael Obafemi - (On for Romeu 87') NA: Very late sub who earned Saints a point after getting on end of Ward-Prowse corner at back post. Getty

These were the details of the news Manchester United v Chelsea: Ole Gunnar Solskjaer unhappy with 'unfair' FA Cup schedule for this day. We hope that we have succeeded by giving you the full details and information. To follow all our news, you can subscribe to the alerts system or to one of our different systems to provide you with all that is new.