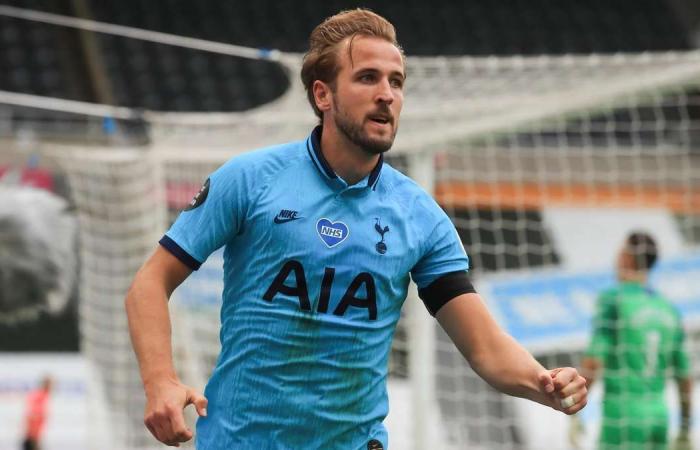 Emil Krafth – 5, Played because Danny Rose was unable to against his parent club, but did not provide the influence the loanee might have done. AFP

Federico Fernandez – 6, Booked for a foul on Lo Celso. Did not appear too troubled otherwise, but Spurs were clinical when they had their chances. Reuters

Fabian Schar – 7, Sparked an attack in the second half with a purposeful forward run. Wore an arm in the face from Harry Kane straight after. Reuters

DeAndre Yedlin – 5, Popped up in the centre-forward position, which went to show how keen he was to make an impression against his old club, before being subbed. AFP

Matt Ritchie – 8, A ready source of crosses – with either foot – and hit a sweet strike for the leveller. Reuters

Nabil Bentaleb – 5, Would have wanted a greater impact against the club where he first cut his teeth, but was inconspicuous. EPA

Miguel Almiron – 6, Had two good chances early on, one blocked and one blazed over, and his influence waned thereafter. Reuters

Jonjo Shelvey – 7, Wasted a fine headed chance from a Ritchie cross early on, but was Newcastle’s best source of midfield creativity. Reuters

Allan Saint-Maximin – 7, Plenty of drive and dynamism, but not always in the most dangerous positions for Newcastle. EPA

Dwight Gayle – 6, Hit the post with a clever flicked header just before half time, but seemed agitated with the supply chain for much of the time. EPA

SUBS: Valentino Lazaro (on for Yedlin, 55') – 7, His driving run with his first touch of the ball set up the chance for Ritchie’s equaliser. Reuters

Joelinton (on for Gayle, 69') – 5, Enough time, but little opportunity to make a difference after coming on as a second-half sub. Reuters

Matt Longstaff (on for Bentaleb, 69') – 6, Tried to look busy after his late introduction but his chances were few. EPA

TOTTENHAM RATINGS: Hugo Lloris – 6, No chance with Ritchie’s blistering strike, but was equal to anything else Newcastle’s forwards had to offer. Reuters

Serge Aurier – 7, Remarkable he felt able to play, two days after his brother’s death. Not as buccaneering as usual, but that was no bad thing. Reuters

Toby Alderweireld – 7, Unlucky to incur a rare yellow card for a foul on Ritchie, but was an image of composure thereafter. Reuters

Davinson Sanchez – 7, Bravely headed Almiron’s shot away early on, and made an important second half block, too. Reuters

Ben Davies – 5, Made a bungled clearance to put his side under pressure in the first half, and struggled to cope with Saint-Maximin. AFP

Harry Winks – 7, Tidy and unspectacular, as is his standard. Made some timely interventions from a defensive perspective. Reuters

Giovani Lo Celso – 7, Showed great tenacity to set up Son for the opener and was assured on the ball until his substitution on the hour mark. Reuters

Moussa Sissoko – 6, The heavy schedule might be counting against a player whose game relies on athleticism, as he was subdued against his old team. Reuters

Lucas Moura – 8, A constant threat with both his dribbling and passing before succumbing to a second-half injury. Reuters

Son Heung-min – 8, Put Spurs into the lead with his 18th goal of the season, and was not shy to work back for his team. EPA

Harry Kane – 7, Still not at full sharpness, and Spurs attacks often slowed once the ball reached him, but he made no mistake with his two headed goals. Reuters

SUBS: Eric Lamela (on for Lo Celso, 62') – 7, Just what Spurs required after his introduction for his compatriot Lo Celso, and he made the clincher for Kane. AFP

Steven Bergwijn (on for Moura, 57') – 8, Immediate impact with an appetising cross for Kane’s goal after replacing Moura. EPA

Jan Vertonghen (on for Kane, 90') – NA, On to use up some time and bolster the defence straight after Spurs had clinched it. AFP

These were the details of the news Nabil Bentaleb 5, Matt Ritchie 8; Harry Kane 7, Son Heung-min 8 - Newcastle v Tottenham player ratings for this day. We hope that we have succeeded by giving you the full details and information. To follow all our news, you can subscribe to the alerts system or to one of our different systems to provide you with all that is new.