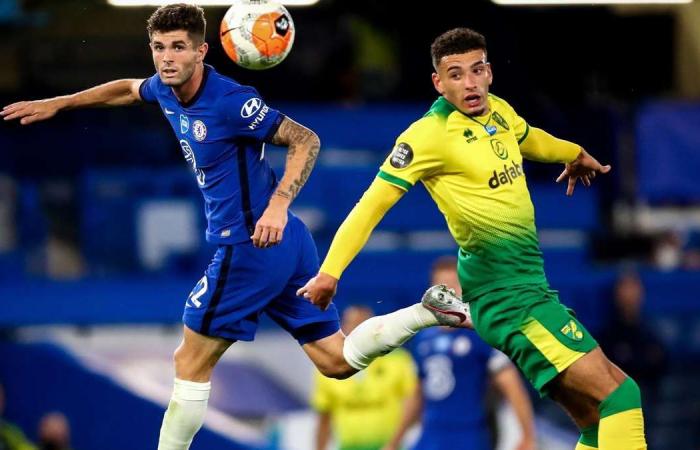 Hind Al Soulia - Riyadh - CHELSEA RATINGS: Kepa Arrizabalaga – 6, Will have been happy for such a quiet night given the questions that have been asked of him of late. AFP

Cesar Azpilicueta – 7, Rarely will he have felt more like an attacker. Hardly needed in defence, so spent most of the game providing ammo for his forwards. AFP

Antonio Rudiger – 6, Heeded his manager’s call for more direct passing, but his radar was not always working. Made one fine tackle to stub out a rare Norwich attack. AFP

Kurt Zouma – 6, Should have scored with a header from a corner when six yards out early on. Daft booking for a foul on Max Aarons in an unthreatening position. AFP

Marcos Alonso – 5, Had the freedom of Chelsea’s left flank, and he should have made more of the positions he found himself in. Reuters

Ruben Loftus-Cheek – 5, Looked disorientated on a rare start, and was caught a painful blow from Todd Cantwell to compound his frustration. AFP

Mateo Kovacic – 7, The home side had a lack of thrust, bearing in mind they were playing the league’s worst side. Kovacic seemed the player most keen to address that. AFP

Christian Pulisic - 7, Denied a fine goal by Krul, then provided a cross so delightful that even Giroud was able to convert. AFP

Willian - 6, Given the stellar run of performances the Brazilian has had lately, this counted as a quiet evening. AFP

Olivier Giroud - 6, Had one attempt on goal that hit his standing leg and went off in entirely the wrong direction, but at least fared better with his head. AFP

SUBS: Ross Barkley - 6, Came on for Loftus-Cheek at the second-half drinks break, and started like he meant it with a spectacular cross-field pass that Alonso wasted. AFP

Reece James – 7, Showed more in the way of appetising delivery in his short stint on the field than the rest of his side managed the rest of the time. EPA

Callum Hudson-Odoi – NA, Came on for Pulisic, but had little chance to impress. AFP

Tammy Abraham - NA, Arrived late in place of Giroud and served a purpose, namely to chew up time. Reuters

NORWICH RATINGS: Tim Krul – 8, The loudest voice on the field, which his opposition manager might have appreciated. No chance for Giroud’s goal, but confident enough besides that. AFP

Max Aarons – 6, Overrun by Pulisic and Alonso, but he was not getting much help from the midfield in front of him. AFP

Ben Godfrey - 6, Nearly donated a goal to Giroud on 20 minutes with a lame back-header, but did well to help limit the shots on Krul’s goal. EPA

Timm Klose- 6, Soldiered on after a leg injury from a collision with Pulisic, but lost Giroud for the opener – then copped an arm in the face from the same man. EPA

Jamal Lewis – 7, The fact Willian was uncharacteristically quiet was a commendation for the man who lined up opposite him. AFP

Alexander Tettey – 6, Made it as far as the 78th minute, having been chasing shadows for much of the time till he was substituted. Reuters

Lukas Rupp – 5, Lucky not to be booked for an early foul on Loftus-Cheek, and struggled for any sort of foothold thereafter. EPA

Kenny McLean – 6, Did well helping Lewis with the double threat of Willian and Azpilicueta, but to the detriment of anything constructive going forward. Reuters

Todd Cantwell - 6, Unlucky to be the first Canaries player to be hooked by Daniel Farke as he was of the few carrying some attacking oomph. AFP

Onel Hernandez - 6, Tenacious and determined when Norwich were out of possession. Which was most of the game. Reuters

Josip Drmic – 5, Might need to be reintroduced to his teammates, given how far apart he was from them for most of the evening. EPA

SUBS: Teemu Pukki – 5, Continues to cut a disconsolate figure on the bench. His glorious start to the campaign seems sepia tinted now. EPA

Emi Buendia – 5, The first sub used as he came on for Cantwell, but was unable to offer the same threat. Reuters

Marco Stiepermann – 5, Scarcely noticeable in the 15 minutes he was given at the end. AFP

Adam Idah – 6, Pulled quite a stunt to evade the offside flag as Norwich mounted a rare attack late on. AFP

These were the details of the news Christian Pulisic 7, Olivier Giroud 6; Tim Krul 8, Josip Drmic 5 - Chelsea v Norwich City player ratings for this day. We hope that we have succeeded by giving you the full details and information. To follow all our news, you can subscribe to the alerts system or to one of our different systems to provide you with all that is new.