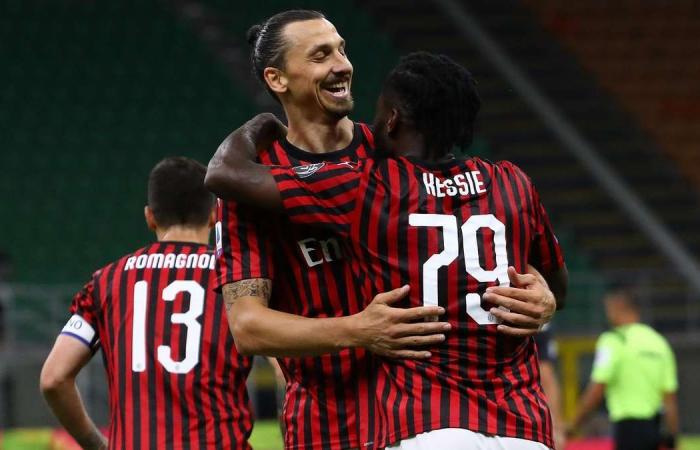 Thank you for your reading and interest in the news Zlatan Ibrahimovic: 'If I was here from day one, AC Milan would have won the title' and now with details

Hind Al Soulia - Riyadh - Zlatan Ibrahimovic has said AC Milan would have won the Serie A title if he had joined the club at the start of the season.

Ibrahimovic, who returned for a second stint the San Siro club in January, scored from the penalty spot as Milan staged a remarkable comeback from 2-0 down against champions Juventus to win 4-2 on Tuesday.

Milan have been in fine form since the restart, claiming four wins and a draw in five games, including a comprehensive 3-0 thrashing of second-placed Lazio.

The recent run of results has catapulted Milan up to fifth in the Serie A table, but with a 14-point deficit on fourth-placed Atalanta with seven games remaining, their Champions League hopes are all but over for another season.

It has left Ibrahimovic to wonder what might have been.

"It's no secret that I'm old but it's just a number," the 38-year-old Swede said. "I wanted to feel alive and I just want to play. I don't have the same physique before, but I can overcome that with intelligence."

Ibrahimovic's mere presence appears to have galvanized Milan, who last won the title in 2011. They have lost only twice since his arrival and climbed to fifth, having at one point dropped to 14th.

"I'm sorry I came halfway through the season," he said. "If I was here from day one we'd have won the championship."

After being substituted on Tuesday, he was seen yelling encouragement to his teammates from the touch-line.

"I'm president, coach, and player. But I only get paid to be a player. That's the downside," he joked.

Serie A is being played without spectators because of the coronavirus pandemic and Ibrahimovic regretted that there were no fans to witness Tuesday's win at San Siro, while hinting that he may not be staying beyond the end of the season.

"If it had been full, it would have been nice, the fans could have had fun with us," he said.

"I have a month to have fun, then things happen here that we can't control. I'm sorry for the fans, they may not see me in person anymore," he said. "They could have seen me live for the last time - read between the lines."

These were the details of the news Zlatan Ibrahimovic: 'If I was here from day one, AC Milan would have won the title' for this day. We hope that we have succeeded by giving you the full details and information. To follow all our news, you can subscribe to the alerts system or to one of our different systems to provide you with all that is new.