Ocampos the hero as Sevilla close in on Champions League berth 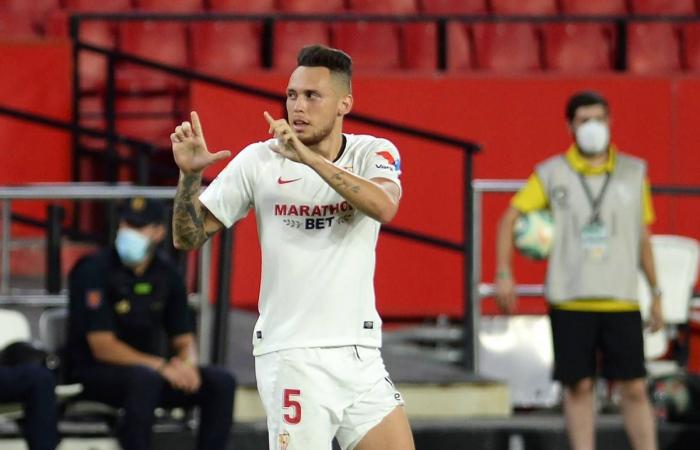 Aden - Yasmine El Tohamy - Winger scores the only goal against Eibar and then makes a crucial save after replacing injured Vaclik in goal.

Sevilla winger Lucas Ocampos struck the decisive goal and pulled off a last-gasp save as a makeshift goalkeeper as his side beat Eibar 1-0 on Monday in La Liga to home in on a return to the Champions League.

The Argentine broke the deadlock in the 56th minute by sliding in at the far post to bundle in a cross from Jesus Navas, and then pulled on a goalkeeper's jersey for the final minutes after keeper Tomas Vaclik was carried off on a stretcher deep into added time.

Coach Julen Lopetegui had made all five of the permitted substitutes so could not bring on a reserve keeper but Ocampos proved up to the task by repelling a shot from Eibar keeper Marko Dmitrovic in the 11th minute of added time.

Dmitrovic had come up from his area to contest a late corner and almost snatched an equaliser but fired straight at Ocampos, who spread his arms to turn the shot away.

"I like to play in goal in training but I never imagined I would end up playing in goal in a match in the last few minutes but I'm always ready to help the team in any position," Ocampos said.

"Before I went in goal the goalkeeping coach told me not to go far from the goal and the ball came towards me, I was able to push it away and we got the three points."

Eibar meanwhile remain in danger of relegation, occupying the final spot outside the bottom three with a six-point lead over 18th-placed Real Mallorca.

Earlier on Monday, Real Sociedad's slim hopes of finishing in the top four practically ended with a disappointing 1-1 draw at Levante on Monday, as Alexander Isak's 12th-minute strike was quickly cancelled out by a goal from Levante's Jose Luis Morales.

Sociedad were fourth in the standings in March when action in La Liga was suspended due to the Covid-19 pandemic but have only picked up five points in seven games since the re-start.

They are seventh on 51 points, while Levante are 12th on 43 points.

These were the details of the news Ocampos the hero as Sevilla close in on Champions League berth for this day. We hope that we have succeeded by giving you the full details and information. To follow all our news, you can subscribe to the alerts system or to one of our different systems to provide you with all that is new.