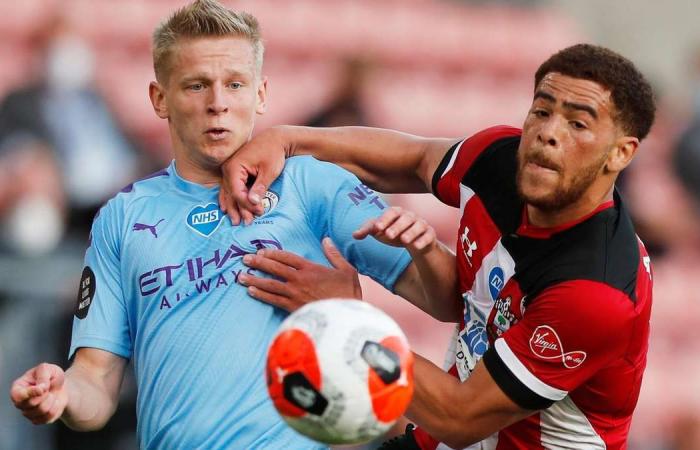 Thank you for your reading and interest in the news Jack Stephens 8, Kyle Walker-Peters 9; Oleksandr Zinchenko and Gabriel Jesus 5 - Southampton v Manchester City player ratings and now with details

Hind Al Soulia - Riyadh - SOUTHAMPTON RATINGS: Alex McCarthy – 9, Outstanding. All that practice in his garden with his daughter during lockdown paid dividends with a fine display. EPA

Kyle Walker-Peters – 9, The Tottenham loanee was resolute in defence, and could have had an assist to his name with a deft through ball for Ings in the first half. EPA

Jack Stephens – 8, In the right place at the right time – all the time, as he blocked shot after shot. EPA

Jan Bednarek - 8, Much like Stephens, he was overworked and benefitted from good fortune at times – but fortune favours the brave. EPA

Ryan Bertrand – 6, Had to have a sit down in the second half, given the hard time he had had from City’s forward line. Reuters

James Ward-Prowse – 6, City’s dominance of the ball meant he solely had a spoiling role rather than anything more creative. Reuters

Oriol Romeu – 6, Diligent enough, but was often overrun by the City midfield. AFP

Nathan Redmond – 7, Knows he has an admirer in the opposition manager, and Guardiola should have been impressed by his industry here. EPA

Danny Ings – 8, Led the Saints defensive effort from the front, which included one important clearance on his own goalline. Reuters

Che Adams – 7, What a way to open his Southampton account, 35 games since his last goal for anyone. Audacious lobbed finish to win the game. EPA

SUBS: Shane Long (on for Adams, 70') – 5, Saints could have done with the ball sticking with him for longer once he had come on for the goalscorer Adams. Reuters

Will Smallbone (on for Armstrong, 90+7') – NA, Just enough time to get across the whitewash before the referee called time. Reuters

MANCHESTER CITY RATINGS: Ederson – 6, Wasn’t his fault Zinchenko gave the ball away as he did for the opener – but he was lax in getting back to his goal and was stranded in no-man’s land. AFP

Joao Cancelo – 6, Carried a threat in attack, but was often loose at the back, too. EPA

Aymeric Laporte – 6, Often looked unsettled, which was a surprise given City owned the ball for so much of the game. EPA

Eric Garcia – 6, Lucky not to donate a second to Adams with a sloppy back pass in the second phase. EPA

Oleksandr Zinchenko – 5, Copped an earful from his teammates after giving the ball away for Adams’ opener, and did not seem to regain their confidence, no matter how much he tried to redeem himself. Reuters

Fernandinho – 6, Customary yellow card for a late tackle on Redmond, and did not let up thereafter, either. EPA

Bernardo Silva – 7, Mis-hit a late volley when well placed to equalise, which summed up an evening of frustration. AFP

David Silva – 7, McCarthy was in inspired form in the home goal, but Silva really should have beaten him when clean through. EPA

Riyad Mahrez – 6, He was threatening on set pieces as well as open play before going off just before the hour mark. AFP

Raheem Sterling – 7, Removal from the fray before 60 minutes were on the clock was probably more due to the workload than his effort. EPA

Gabriel Jesus – 5, Booked for dissent late on to cap off an evening of annoyance for the Brazilian striker. AFP

SUBS: Kevin De Bruyne (on for Mahrez, 60') – 7, Had the chance to score for a fourth game in a row, but sent his injury time free-kick into the Southampton defensive wall. Reuters

Phil Foden (on for Sterling, 60') – 7, Looked perky when he was introduced alongside De Bruyne, but did not have quite enough time to prise a decisive opening. EPA

These were the details of the news Jack Stephens 8, Kyle Walker-Peters 9; Oleksandr Zinchenko and Gabriel Jesus 5 - Southampton v Manchester City player ratings for this day. We hope that we have succeeded by giving you the full details and information. To follow all our news, you can subscribe to the alerts system or to one of our different systems to provide you with all that is new.