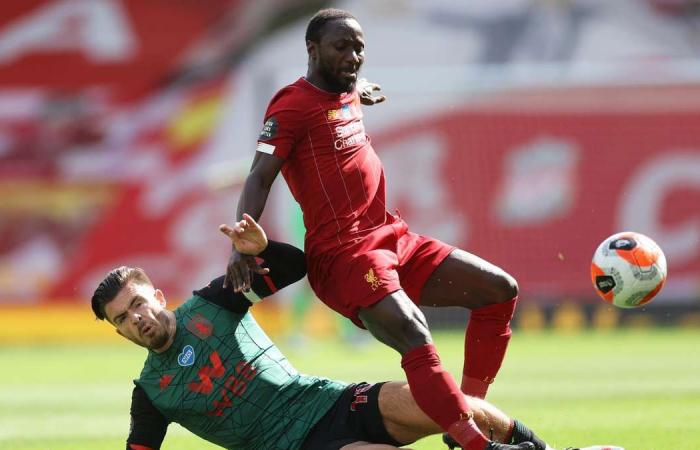 Thank you for your reading and interest in the news Curtis Jones 7, Naby Keita 8; Indiana Vassilev gets a run out - Liverpool v Aston Villa player ratings and now with details

Hind Al Soulia - Riyadh - Alisson Becker – 7, Coped with everything that came near him, and tried his best to create, too, with some quick, long-range passes. Good late save to thwart Grealish. Reuters

Trent Alexander-Arnold – 7, Among Liverpool’s most creative forces, which is hardly unusual. Played the pass before the assist for the opener. AFP

Virgil van Dijk – 6, Lucky his side were not punished after he had given the ball away to Luiz in the second phase. Other that that, he was little troubled. EPA

Andy Robertson – 5, Seems as though he clocked off as soon as Liverpool clinched the league. He made plenty of missteps and was booked, too. EPA

Alex Oxlade-Chamberlain – 6, Huffed and puffed, but to little effect, bar a couple of semi-threatening crosses. EPA

Fabinho – 6, Nowhere near the spellbinding display of the last time he played at Anfield, and he was subbed on the hour. EPA

Naby Keita – 8, Threaded a fine pass for Sadio Mane to finally break the shackles, and was full of energy throughout. EPA

Mohamed Salah – 6, Some way short of his best, but still good enough to provide a cute assist for Curtis Jones’ goal near the end. Reuters

Sadio Mane – 7, Happy to go looking for work when the ball was not finding him, and he was perfectly placed to hit the opener.Reuters

Divock Origi – 5, Caught the eye because of his newly-dyed peroxide hair, but definitely not his performance. AFP

SUBS: Georginio Wijnaldum (on for Fabinho, 61') – 6, Helped give the champions some cohesion when he was part of a triple substitution on the hour. Reuters

Roberto Firmino (on for Origi, 61') – 5, Given half an hour at the end, but continues his anonymous return since lockdown. Reuters

Jordan Henderson (on for Oxlaide-Chamberlain, 61') – 7, Provided the oomph that really was required as Liverpool laboured for the first 60 minutes. EPA

Curtis Jones (on for Keita, 85') – 7, Canny positioning allowed him to profit from Salah’s knockdown to score his first goal in front of the Kop. AFP

Neco Williams (on for Robertson, 90+4') – NA, Sneaked in an appearance fee just before the final whistle. EPA

ASTON VILLA RATINGS: Pepe Reina – 6, No chance with either of the goals, and was otherwise underemployed on his perform to his old stomping ground. AFP

Ezri Konsa – 7, Coped well enough with Robertson and Mane in the first phase, and was rewarded by having Origi switch to his flank in the second. EPA

Kortney Hause – 7, Maybe fortunate to not to have conceded a penalty against Salah – but that would have been unjust itself, given how capably he performed otherwise. Reuters

Neil Taylor – 6, Made one important clearance from a Robertson cross, but the two goals both came in areas he could have filled. AFP

Douglas Luiz – 8, His industry was the major feature of a plucky Villa performance – and he even dispossessed Van Dijk. EPA

John McGinn – 5, Booked for a late challenge on Oxlade-Chamberlain in the first half, and was half a step behind for much of it. EPA

Jack Grealish – 7, Appeared to be batting a foot injury throughout, which took some of the spark out of him. EPA

Anwar El Ghazi – 5, Too many Villa attacks broke down when the ball made it to the ponderous wide-man. AFP

Trezeguet – 5, Wasteful with a cross when Villa needed better on the break in the first-half, which typified his side’s lack of precision. EPA

Keinan Davis – 6, From Biggleswade Town to the big time. No surprise he found it tough going against Van Dijk, but no disgrace either. Reuters

SUBS: Mbwana Samatta (on for Davis, 74') – NA, For Jota, ditto Samatta. Both appeared to have the best intentions, but without the opportunity. EPA

Jota (on for El Ghazi, 74') – NA, Saw some of the ball when he came on, but not in areas of the pitch where he could make an impact. Reuters

Indiana Vassilev (on for Trezeguet, 85') – NA, Only enough time to complete a satisfying word-play with the Liverpool substitute Jones. EPA

These were the details of the news Curtis Jones 7, Naby Keita 8; Indiana Vassilev gets a run out - Liverpool v Aston Villa player ratings for this day. We hope that we have succeeded by giving you the full details and information. To follow all our news, you can subscribe to the alerts system or to one of our different systems to provide you with all that is new.