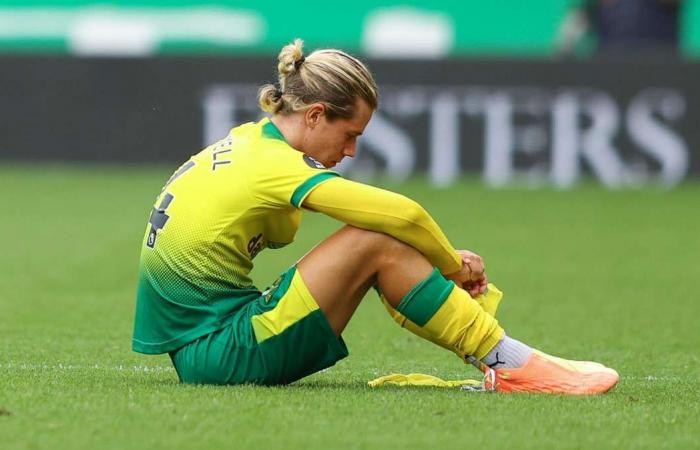 Thank you for your reading and interest in the news Aaron Mooy 8, Tariq Lamptey 8; Josip Drmic 4: Norwich City v Brighton player ratings and now with details

Hind Al Soulia - Riyadh - NORWICH RATINGS: Tim Krul - 7: No repeat of his nightmare error at Arsenal. No chance with Brighton's goal and decent save from swerving Bissouma drive in second half. Getty

Max Aarons - 6: Right-back, like Lewis on the opposite flank, was keen to get forward but his final ball wasn't up to much. Getty

Ben Godfrey - 7: Good display despite being left exposed by his marauding full-backs at times. AP

Jamal Lewis - 5: Left-back played too high up the pitch in first half which Brighton - and Mooy in particular - were happy to exploit. Booked in tough opening 45 minutes. A couple of dangerous crosses in second period. PA

Emiliano Buendía - 6: Flashes of skill and good footwork from the Argentine but with little end product. AFP

Ondrej Duda - 5: Slovakian contributed very little before being taken off midway through the second half. EPA

Josip Drmic - 4: Swiss striker offered very little. Had one second-half chance which he hit tamely straight at Ryan in the Brighton goal before being taken off. Reuters

SUBS: Todd Cantwell (on for Hernandez, 67') - 6: Would have been disappointed not have started and looked resigned to his team's relegation at the end. AP

Teemu Pukki (on for Drmic, 67') - 5: Like Cantwell, Norwich's top scorer will feel he should have started the game. Did nothing when he came on, though. EPA

Mario Vrancic (on for Tettey, 78') NA: No time to make an impact

BRIGHTON RATINGS: Mat Ryan - 7: Comfortable with what little Norwich threw at him. EPA

Adam Webster - 7: Solid and reliable show from the centre-back. PA

Davy Propper - 7: A good engine in the centre of midfield and worked well alongside Bissouma. Getty

Aaron Mooy - 8: Australian midfielder relished the space given to him down the right in first half and supplied a perfect low cross for Trossard to score. AFP

Leandro Trossard - 7: Impressive when he came on as substitute in the defeat against Manchester United and continued that form today. Lovely first-time finish for opening goal. Could have had another soon after but first touch let him down. EPA

Aaron Connolly - 6: Worked hard up front without ever looking like scoring. Getty

Neal Maupay - 6: Chances at a premium for Brighton's top scorer. One swing and a miss when presented with good chance by Lamptey in first half. Reuters

SUBS: Bernardo - (sub Connolly 72) 6: Brazilian slotted in without any problems after coming on. Getty

These were the details of the news Aaron Mooy 8, Tariq Lamptey 8; Josip Drmic 4: Norwich City v Brighton player ratings for this day. We hope that we have succeeded by giving you the full details and information. To follow all our news, you can subscribe to the alerts system or to one of our different systems to provide you with all that is new.