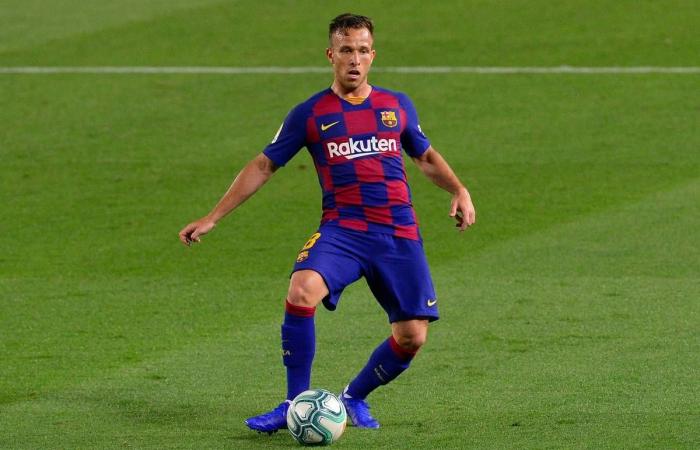 Thank you for reading the news about Barcelona and Juventus confirm Arthur, Pjanic swap deal and now with the details

Aden - Yasmine El Tohamy - Barcelona midfielder Arthur Melo will join Juventus at the end of the current season, with Miralem Pjanic moving in the opposite direction, the two clubs announced on Monday.
Barcelona said they had paid 60 million euros ($67.4m) plus a potential five million euros more in bonuses for Bosnian playmaker Pjanic after earlier confirming Juventus would pay 72 million euros plus 10 million in variables for Arthur.
The two deals have gone through separately, allowing both clubs to boost their profit figures ahead of the end of the financial year on June 30.
Pjanic's four-year contract includes a release clause of 400 million euros while Juventus said Arthur's contract will run for five years, until June 2025.
Arthur and Pjanic will remain with their current teams until the end of the 2019/20 campaign, which will include the latter stages of the Champions League in August.
It raises the possibility that Arthur and Pjanic could yet face each other, and their future clubs, in the Champions League final eight in Portugal, should both sides win their outstanding last 16, second leg matches.
In a statement, Juventus said they had signed Arthur for "72 million euros payable in four years. The purchase value may increase by a maximum of 10 million euros on the fulfillment of certain conditions during the contractual term."
Arthur, a Brazilian international, only joined Barca from Gremio in 2018 and was hailed as a future star for the club, with many tipping him as the long-term successor to Xavi Hernandez in central midfield.
After an encouraging start, the 23-year-old has been one of several players to stagnate this season but the primary motivation for his sale is thought to be financial.
Arthur's departure puts more scrutiny on Barcelona's board and president Josep Maria Bartomeu. They have overseen a number of haphazard moves in the transfer market and have been accused of failing to implement any clear sense of direction for the club.
Barcelona have been hit hard by the three-month suspension due to the coronavirus pandemic and they needed to bring in around 70 million euros to satisfy their budget for the current season.
By selling Arthur, the board can register the profits from the transfer immediately before spreading the payments for Pjanic over the length of the 30-year-old's contract.
Pjanic joined Juventus from Roma in 2016. He was brought up in Luxembourg and initially made his name in French football with Metz and then Lyon.
Last year, Barcelona carried out a similar transaction by exchanging goalkeeper Jasper Cillessen for Valencia's Neto, in deals worth around 30 million euros each.
While Pjanic will cost around 10 million euros less than the amount Juventus pay for Arthur, the Italians might feel they have the better deal given the Brazilian is seven years younger.
Arthur had been reluctant to leave the Camp Nou and even released a statement in April, insisting his "idea was clear" and that he wanted to play at Barcelona "for many years".
But he was persuaded to change his mind after being given limited game time under Quique Setien while Juve coach Maurizio Sarri had reportedly made it clear he would be a key figure in his side in Turin.
Setien said in a press conference on Monday the playmaker had promised to give his all for the rest of the season as Barcelona look to make up a two-point gap on Real Madrid at the top of the table.
"We expect the greatest commitment from him until the last day he is here," Setien said.
"He is still a Barcelona player until the end of the season and has promised that he will give everything to achieve the goals we have set. He is a guy who will be committed until the last day."

These were the details of the news Barcelona and Juventus confirm Arthur, Pjanic swap deal for this day. We hope that we have succeeded by giving you the full details and information. To follow all our news, you can subscribe to the alerts system or to one of our different systems to provide you with all that is new.