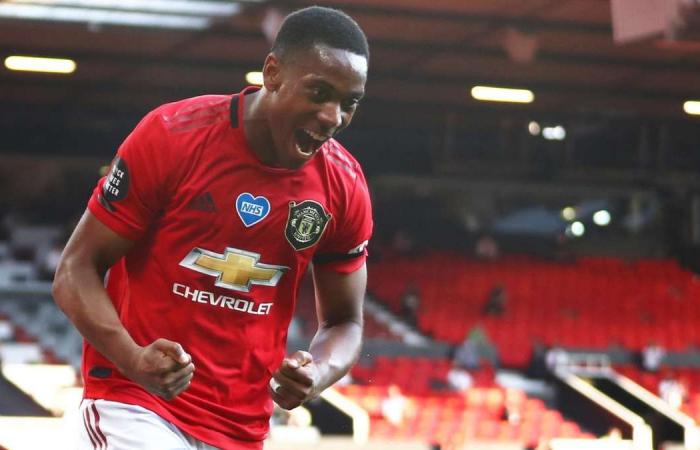 Thank you for your reading and interest in the news Premier League and FA Cup predictions: Lampard loving it, Arsenal on target, Manchester United safely through and now with details

Hind Al Soulia - Riyadh - SATURDAY: Premier League: Aston Villa v Wolves (3.30pm UAE kick-off times): Just a few days after putting a dent in Bournemouth's survival hopes, Wolves now turn their attention to another struggling side in Aston Villa. Raul Jimenez scored the 60th-minute winner against the Cherries. Villa, meanwhile, were grateful for substitute Ahmed Elmohamady's late header that rescued a point at Newcastle. A defeat would have been harsh on Dean Smith's side but if they waste good chances against Midlands rivals Wolves, like they did on Tyneside, Villa will find themselves deeper in the relegation mire. Prediction: Aston Villa 0 Wolves 1. EPA

FA Cup sixth round: Norwich City v Manchester United (8.30pm): Anthony Martial's hat-trick against Sheffield United on Wednesday was just the tonic the Red Devils needed to continue their surge towards Champions League football next season. Ole Gunnar Solskjaer's men now turn their attentions to the FA Cup and they could not have timed it better to take on the hapless Canaries. A 1-0 home defeat to Everton on Wednesday was Norwich's loss defeat on the trot and leaves them six points adrift from safety at the foot of the table. A resurgent United gunning for silverware will show no mercy. Prediction: Norwich 1 Manchester United 3. Reuters

SUNDAY: FA Cup sixth round: Sheffield United v Arsenal (4pm): Relief for the Gunners on Thursday when they avoided a third league defeat in a row by winning at Southampton. Top scorer Pierre-Emerick Aubameyang might not have been on target at St Mary's but he was a constant threat in attack, hit the bar and was brought down by Jack Stephens when he looked set to score, causing the Southampton defender to be sent off. The blunt Blades have endured a miserable Project Restart, earning one point from a possible nine, and hopes of an FA Cup pick-me-up are set to be dashed at Bramall Lane. Prediction: Sheffield United 1 Arsenal 3. EPA

Leicester City v Chelsea (7pm): An intriguing cup clash between two teams sitting third and fourth in the league table. Frank Lampard's Chelsea will be in fine spirits after their 2-1 win over Manchester City on Thursday, a result that handed the title to Liverpool. They are now just one point behind the Foxes, who have just been held to disappointing draws by relegation threatened Brighton and Watford. The momentum is building behind Chelsea's impressive young team. Prediction: Leicester City 1 Chelsea 2. AFP

Newcastle United v Manchester City (9.30pm): A big test for both teams. Newcastle are playing their first FA Cup quarter-final since 2006 and last won a major domestic trophy in 1955. But they have taken four points out of a possible six since the league restarted and have beaten and drawn their previous two games against City at St James' Park. The difference this time round is that they will not have 50,000 Geordies in the stadium roaring them on. Pep Guardiola, meanwhile, will be looking for a reaction from his cup holders after losing at Chelsea on Thursday. Prediction: Newcastle 2 Manchester City 3. AFP

Premier League: Watford v Southampton (7.30pm): Watford suffered a frustrating defeat at Burnley on Thursday, missing the chance to pull away from the drop zone. Six points from a possible 27 is worrying form for manager Nigel Pearson at this critical stage of the campaign. Southampton continued their abysmal home form by losing to Arsenal , also on Thursday. It was the their 10th loss at St Mary's this season and if it wasn't for their efforts away from home, Ralph Hasenhuttl's men would be playing in the Championship next season. Prediction: Watford 1 Southampton 1. AFP

MONDAY: Premier League: Crystal Palace v Burnley (11pm): Both of these teams are safely ensconced in mid-table, are not going to threaten the European places but are also safe from relegation worries. Palace had won four games in a row before being brought back down to earth with a 4-0 humbling at Liverpool on Wednesday. Burnley - whose manager Sean Dyche admitted he had been through "an emotional week" after publicly questioning his own board, prompting reports that he is going to quit - saw his team battle to a 1-0 win over Watford on Thursday. Prediction: Palace 1 Burnley 0. AP

These were the details of the news Premier League and FA Cup predictions: Lampard loving it, Arsenal on target, Manchester United safely through for this day. We hope that we have succeeded by giving you the full details and information. To follow all our news, you can subscribe to the alerts system or to one of our different systems to provide you with all that is new.