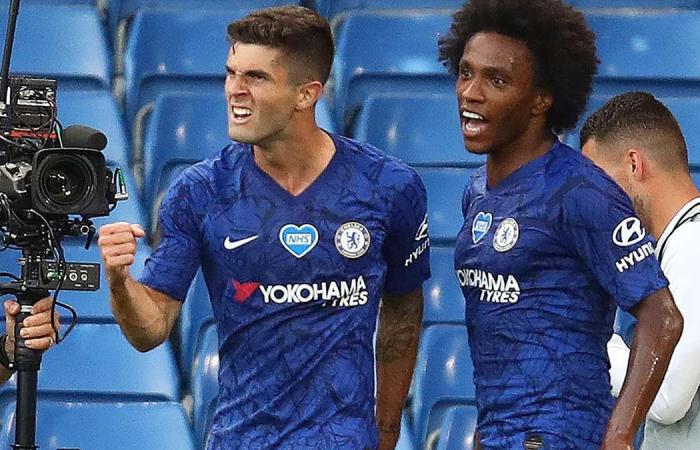 Thank you for your reading and interest in the news Christian Pulisic 8 out of 10, Tammy Abraham 7, Fernandinho 4: Chelsea v Manchester City player ratings and now with details

Hind Al Soulia - Riyadh - Kepa Arrizabalaga – 6. A performance that sums up much of his time at Chelsea. A botched clearance almost proved costly, but he produced a great save to deny Fernandinho’s header. Couldn’t do much about Kevin De Bruyne’s free kick. AP

Antonio Rudiger – 8. Chelsea’s best centre-back needed to be his side’s rock in the face of plenty City of pressure and the German was exactly that. Solid in the air and marshalled the line. AP

Andreas Christensen – 8. Since reclaiming his place in the side, Christensen has shown his manager why he should be Rudiger’s first-choice partner. This was another fine display from the Dane, who could have got himself on the scoresheet. EPA

Marcos Alonso – 6. Has always looked susceptible when playing in a back four and was given arguably the toughest assignment of the night trying to contain the in-form Riyad Mahrez. First-half booking hardly helped matters but the Spaniard stuck to his task. AFP

N’Golo Kante – 7. Utilised in his favoured defensive midfield role, Kante provided structure to his team and support for the defence. However, the Frenchman’s passing – which has proven to be a vastly underrated component of his game – was lacking at times as City dominated possession. Reuters

Ross Barkley – 6. Recalled to the starting XI, Barkley could not quite get a foothold in a game in which City controlled the ball for two-thirds. The Englishman did plenty of running and twice got in behind the City line but struggled to impose himself. AFP

Mason Mount – 6. After a man of the match performance against Aston Villa, Chelsea’s lively midfielder was more subdued. Required to do more defensive work than normal, Mount still had a one-on-one chance he sent wide. AFP

Willian – 7. Busy all match, providing an outlet all across Chelsea’s attacking line. Did his defensive duties well as expected and was responsible for winning and converting the match-winning penalty. He'll be missed next season. Reuters

Christian Pulisic – 8. His goalscoring appearance off the bench against Villa earned the American a starting place and he didn’t let it go to waste. Pulisic capitalised on a City error to score his side’s opening goal in style and could have had a second. Man of the match. Reuters

Olivier Giroud – 6. In a game where his team rarely had the ball, the French target man had few opportunities. Held the ball up well when it did come his way. AP

Tammy Abraham (62’) – 7. Provided more pace and athleticism when he replaced Giroud for the final half hour. Involved in the lead-up to the penalty. EPA

Mateo Kovacic (73’) – 6. Brought on to help bring some control to Chelsea’s midfield. Did his job well in the face of mounting City pressure. Getty

Billy Gilmour (90+1) – 5. Introduced at the same time as Pedro, so had no time to effect the game. Getty

Ederson – 7. Could do nothing about either goal but produced good saves to twice deny Abraham and Christensen. AP

Kyle Walker – 7. Untroubled all game and pulled off a goalline clearance to deny Pulisic a second. Offered an attacking outlet down the right. AFP

Aymeric Laporte – 7. Another solid display from City’s best centre-back in another reminder of just how badly they’ve missed him this season. AFP

Fernandinho – 4. Actually played quite well and could have scored the opener were it not for Kepa’s acrobatic save. But his red card for a handball on the line turned the match. AP

Benjamin Mendy – 4. After the opening exchanges it looked like Mendy could be the standout player on the pitch. Instead, the French full-back’s performance nosedived and he was chiefly responsible for Pulisic’s goal. AFP

Ilkay Gundogan – 5. Won the ball back more than any other City player but was also involved in the mess that led to Pulisic’s opener. AP

Rodri – 6. Central to City controlling the midfield in the first half but was subbed off early in the second half as Pep Guardiola went more attacking. Reuters

Kevin De Bruyne – 8. City’s best player was once again their standout player on the day. Scored a wonderful free-kick. Getty

Riyad Mahrez – 7. Looked like he could have terrorised Chelsea all night, and in particular Alonso. Won the free-kick for De Bruyne to convert and played in Raheem Sterling, only for the Englishman to hit the post. However, couldn’t find his goalscoring boots. AP

Raheem Sterling – 6. Had two great chances to give City the lead during the spell in which the visitors dominated but couldn’t convert either. AP

Bernardo Silva – 5. Deployed in an unfamiliar central attacking role, the Portuguese midfielder showed glimpses of his class but made way in the 55th minute. AFP

David Silva (55’) – 7. The Spanish midfielder was part of the double change as City went in search of the win and brought his usual class to proceedings. AFP

Gabriel Jesus (55’) – 5.. As City’s only fit senior striker, Guardiola looks to be protecting the Brazilian for more important fixtures, namely the FA Cup and Champions League. After coming on, Jesus struggled to get a sight on goal. AFP

Oleksandr Zinchenko (59’) – 6. Proved an upgrade for Mendy on the night, offering City width and an extra attacking outlet on the left. Getty

Nicolas Otamendi (74’) – 6. Was introduced just before Chelsea scored the match-winning penalty. The Argentine did nothing wrong in the time he was on the pitch. Getty

These were the details of the news Christian Pulisic 8 out of 10, Tammy Abraham 7, Fernandinho 4: Chelsea v Manchester City player ratings for this day. We hope that we have succeeded by giving you the full details and information. To follow all our news, you can subscribe to the alerts system or to one of our different systems to provide you with all that is new.