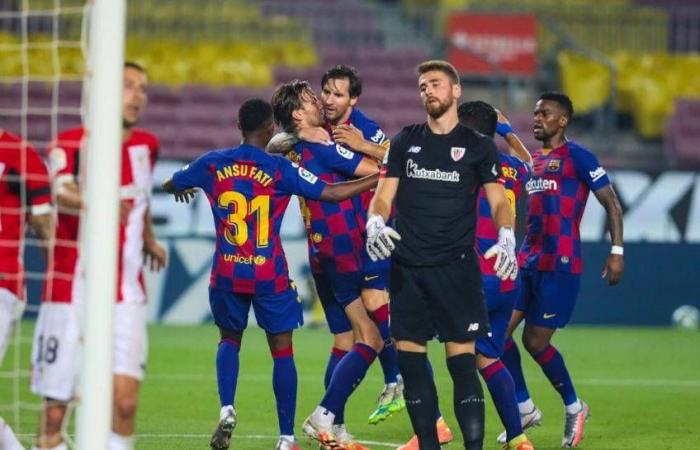 Aden - Yasmine El Tohamy - Lionel Messi looked particularly wearied by his team's display. The Argentinian was creator-in-chief again but the dependence on him was high (Twitter)

Barcelona limped to a 1-0 win over Athletic Bilbao on Tuesday that sends them back to the top of La Liga, for 24 hours at least, three points ahead of Real Madrid.

Only a goal from substitute Ivan Rakitic in the 71st minute prevented Barca from another stalemate after a draw at Sevilla on Friday had allowed Real to go top on head-to-head.

Madrid will return to the summit if they beat struggling Real Mallorca on Wednesday but Barcelona's victory at least puts the pressure back on Zinedine Zidane's side, whose upward momentum is yet to be reflected by the table.

This Barca performance though was hardly a statement of intent, devoid of chances, lacking zip and tinged with frustration rather than the free-flowing football Quique Setien was appointed to bring in.

Lionel Messi looked particularly wearied by his team's display. The Argentinian was creator-in-chief again but the dependence on him was high and he remains one away from the 700th goal of his career.

Rakitic is likely to be among a handful of players allowed to leave this summer. He has not been a regular this season and this was his first Barca goal since the Clasico in March last year.

"It's a difficult period but we have to stick together," said Rakitic. "It was an important goal, it was a tough game, it was hard for us to open the game up."

Arthur Melo started, despite reports he could be close to joining Juventus, and struggled.

Sergio Busquets picked up a yellow card and will be suspended against Celta Vigo on Saturday but that should be a simpler assignment than the ones that come after against in-form Atletico Madrid and Villarreal.

They created the better chances in the first half. Inaki Williams, playing his 150th game in a row, darted in behind and Yeray Alvarez should have scored when free at the back post but missed from four yards.

Messi cut a frustrated figure as he tried to create a spark but his efforts from distance, including one chip easily collected, hinted at desperation too.

In the second half, Messi's lifted pass found Antoine Griezmann clear in the area but Unai Simon was quick to close the space and Griezmann failed to react.

Griezmann's disappointing night came to an end when he was replaced by Ansu Fati, who headed over with his first touch. Riqui Puig also came on and it was the 20-year-old's pass that started the attack for the goal.

Messi crossed to the back post and Arturo Vidal's header should have been cleared by Mikel Balenziaga. Instead, he gave it back to Messi, whose reverse pass was taken on by Rakitic, who bundled through and finished.

Raul Garcia had an open net late on after Gerard Pique and Marc-Andre ter Stegen both evaded a cross but he failed to connect. Fati struck the post with a rebound in injury-time.

Earlier, Atletico Madrid continued their surge towards Champions League qualification by winning 1-0 at Levante to climb to third, thanks to an early own goal by Bruno Gonzalez.

Since matches restarted in Spain two weeks ago, Atletico have taken 10 points from a possible 12 and are now six points clear of fifth, as their top-four rivals have crumbled around them.

One of them is Getafe, who continued their post-suspension slump as they were held to a 1-1 draw against struggling Real Valladolid.

Getafe are fifth but without a win in the four games since La Liga resumed.

These were the details of the news Barcelona grind out Bilbao win to put pressure back on Madrid for this day. We hope that we have succeeded by giving you the full details and information. To follow all our news, you can subscribe to the alerts system or to one of our different systems to provide you with all that is new.