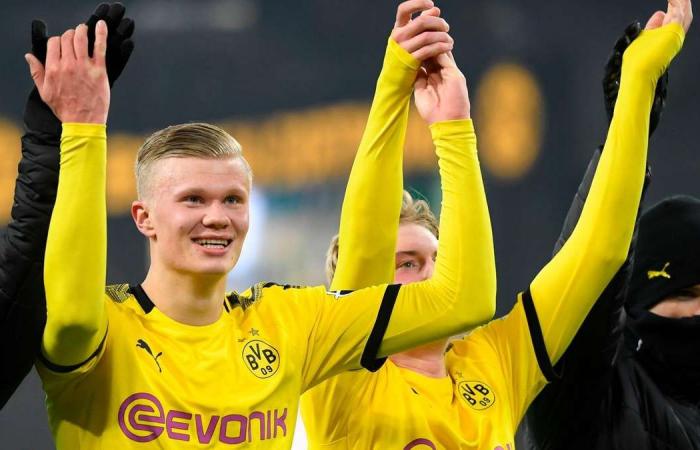 Thank you for your reading and interest in the news Five goals, two matches, 59 minutes on the pitch - Teenager Erling Haaland has now scored more times in 2020 than Manchester United and now with details

The Norwegian teenager took his tally since joining Borussia Dortmund this month to five goals in two matches, with a brace in the 5-1 demolition of Cologne in the Bundesliga on Friday.

Haaland had already announced his arrive at Signal Iduna Park in style with a debut hat-trick against Augsburg on January 18 and his double against a hapless Cologne after coming on as a second-half substitute means he is the first player to score five goals in his first two Bundesliga appearances.

Our columnist Richard Jolly notes in this tweet that the 1.94-metre tall Haaland, the son of former Leeds United and Manchester City player Alf-Inge, has now scored more goals in 2020 than Manchester United, one of several clubs credited with an interest in the striker before he moved to Germany from Austrian side RB Salzburg this month.

He scored 28 goals in 22 games for Salzburg in the first half of the season before joining Dortmund.

Fellow 19-year old Jadon Sancho, Raphael Guerreiro and Marco Reus were the other Dortmund players on target in a win that saw the hosts cut the gap to RB Leipzig to four points before the leaders visit Eintracht Frankfurt on Saturday.

Both first-half goals came from long passes upfield from defender Mats Hummels, who also saw a header hit the bar.

The first goal, in the first minute, ended with Sancho crossing from the right for Guerreiro to score with a first-time shot which keeper Timo Horn got a foot to but could not stop.

For the second, Reus peeled away from the Cologne defence to latch onto Hummels' raking pass and steer the ball through Horn's legs. The goal was initially ruled out for offside but awarded after a VAR review.

In between, Dortmund were awarded a penalty for a foul on Achraf Hakimi by Sebastiaan Bornauw but, after a VAR review, the referee ruled it was outside the area and gave a free kick.

Sancho increased the lead three minutes after the re-start with a clinical finish from a Reus pass before Mark Uth pulled one back with a superb volley from a tight angle.

Haaland, who entered the fray in the 65th minute, got a poacher's goal when he turned in a rebound for the fourth in the 77th.

Ten minutes later, the prolific Norwegian raced onto a through ball, slipped past Horn and rolled the ball into the net from the narrowest of angles before milking the applause from the Suedtribune.

"Especially here at home - that's why we signed him.

"That was a good step forward from us - also from me personally."

Champions Bayern Munich, who are level on 36 points with Dortmund, host Schalke in Saturday's late game.

These were the details of the news Five goals, two matches, 59 minutes on the pitch - Teenager Erling Haaland has now scored more times in 2020 than Manchester United for this day. We hope that we have succeeded by giving you the full details and information. To follow all our news, you can subscribe to the alerts system or to one of our different systems to provide you with all that is new.