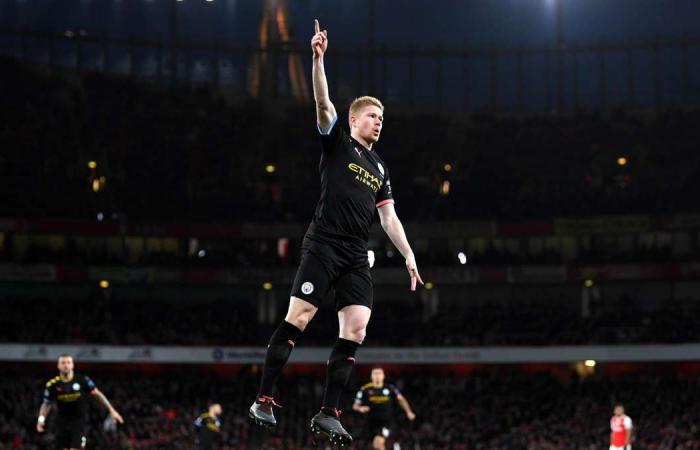 Hind Al Soulia - Riyadh - A 200th match in charge of Manchester City carried with it another three points for Pep Guardiola. It’s just the one stat that matters at the moment still rankles.

A 3-0 victory against Arsenal at the Emirates was desired and totally deserved, begun in an instant by Kevin de Bruyne and buttressed by Raheem Sterling and the Belgian again.

De Bruyne was devastating, City scintillating. With Freddie Ljungberg looking as bemused as Unai Emry, his perplexed predecessor, Arsenal didn’t have any answers.

However, as welcome as only a third win in six Premier League matches proved, the champions remain some way short of the summit. Approaching the halfway stage in the campaign, Liverpool lie 14 points clear of them at the top. City sit third.

Until the Emirates, their 32 points from 16 matches marked Guardiola’s worst start as a manager to a top-flight term. Already, City’s four defeats equalled the entire count from last season’s successful title defence.

The results had given rise to rumour that Guardiola’s fourth season in the City dugout would in fact be his last. Yet his players provided requisite reassurance. In a week dominated by discussion regarding their manager’s future, their dominant display was a significant show of support.

One of the Pep-era dependables, De Bruyne got the evening off on an emphatic note. His goal was spectacular but, given his talent, not that surprising. With little more than one minute on the clock, Fernandinho strode from defence into his default midfield role and released Gabriel Jesus behind the Arsenal back-line.

Jesus turned for the byline, cut back the ball and, with one cultured swish of his right boot, De Bruyne rifled into the roof of the net. The Premier League’s most prominent playmaker, he controlled the bounce and the bobble to thrash home with unerring accuracy. The game was 90 seconds old. The tone had been set.

De Bruyne's latest key contribution carried his direct involvement in league goals this season to 14, a brilliant blend of five goals and nine assists. On 19, only Jamie Vardy can claim more.

By the 15th minute, De Bruyne had crept even closer. A sweeping move that took root with Rodri on the edge of the visitors’ penalty area, flowed through Phil Foden, De Bruyne and Jesus, before De Bruyne squared to Sterling. The England forward simply side-footed into an empty net.

With Arsenal reeling and City rampant, De Bruyne struck again. Collected Foden’s pass, he powered into the centre and calmly slotted a left-footed shot past Bernd Leno. City had three within the opening 40 minutes, all carved by their creator in chief. Almost unbelievably, for the first time De Bruyne had scored twice in the same Premier League encounter.

Moments later, he was inches away from a third. Leno’s fingertips prevented his hat-trick. At full stretch, the German touched a beautifully whipped effort onto the upright. De Bruyne held his head in his hands.

Surrendered by City’s slickers, Arsenal's supporters turned their attention to Mikel Arteta, a former captain tipped a future manager. Sitting alongside Guardiola on the away bench, presumably the Spaniard would have taken no additional pleasure from watching his old side succumb.

As it turned out, Arsenal’s win at West Ham United last week supplied merely a brief reprieve. An anomaly rather than the norm, it is a solitary success among the past nine league matches. Across all competitions, they haven’t triumphed at home in six.

In the second half, Arsenal dug in – they had hardly any choice – although Mesut Ozil’s withdrawal just before the hour was cheered by the crowd. He volleyed away his gloves in disdain.

From there, City didn’t swell the scoreline, even if they seemed capable of clicking back through the gears whenever they wished. A comfortable victory in London restored some order, however odd the gap to Liverpool feels.

A double ton for Guardiola offered enough to hold onto hope, lifting his Premier League points total to 201 from 131 fixtures. It’s just the 14 between them and Jurgen Klopp’s indefatigable front-runners constitutes a considerable mountain to climb.

That said, Sunday’s cruise in the capital, however hospitable the hosts, was a reminder that City possess the pedigree to keep Liverpool looking over their shoulders.

These were the details of the news Kevin De Bruyne makes it memorable 200th for Pep Guardiola in scintillating win at Arsenal for this day. We hope that we have succeeded by giving you the full details and information. To follow all our news, you can subscribe to the alerts system or to one of our different systems to provide you with all that is new.