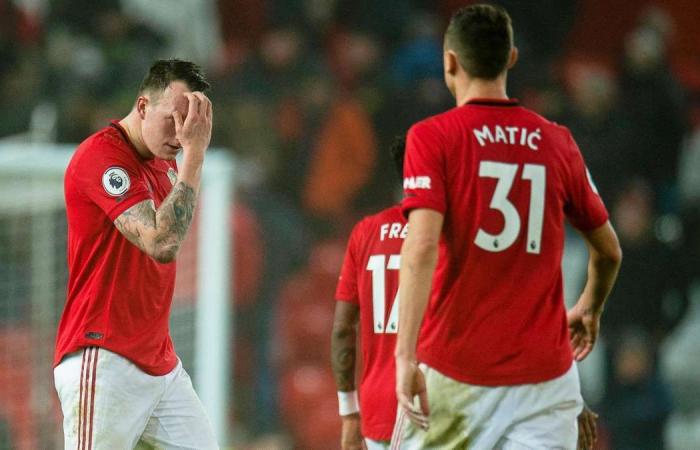 Hind Al Soulia - Riyadh - Ole Gunnar Solskjaer admitted Manchester United were "not good enough" after falling to a first ever Premier League home defeat by Burnley as Old Trafford turned toxic before plenty of fans walked out well before the full-time whistle.

Solskjaer's side were rocked by Chris Wood's first half opener before Jay Rodriguez scored with a superb strike after the break.

It was a woeful display from fifth placed United, who are in such poor form that there will be fresh questions about Solskjaer's job security in the coming days.

Solskjaer had no complaints about a result that laid bare everything wrong with a rudderless team lacking steel in defence, creativity in midfield and a cutting edge up front.

"We have got to hold our hands up and say it wasn't good enough. In the first half we created some half openings but we were not sharp enough to take our chances," Solskjaer said.

"The boys have given everything they have got but they are experiencing this period for the first time in their lives.

"When you are at Manchester United you are playing at the biggest and best club in the world. Some of them have played 10, 12, 15 games and it's not easy for them."

United trail six points behind fourth placed Chelsea but, given how they have struggled so often this season, the only surprise is that the gap isn't bigger.

United's tally of 34 points is their lowest after 24 matches of a top-flight season since 1989-90 and the majority of Old Trafford was on its feet when chants of "stand up if you hate Glazers" echoed around the ground.

Executive vice-chairman Ed Woodward was also subjected to abusive chants in a toxic atmosphere, while those few fans who remained in the stadium booed Solskjaer and his players at full-time.

But Solskjaer is still adamant he can turn the tide if he is given time to develop United youngsters like Mason Greenwood and Brandon Williams.

"I'm going to back them and help them get through this. The players are giving everything, they have done absolutely fantastic so far this season but they know it wasn't good enough tonight," Solskjaer said.

"The boys looked mentally tired towards the end, we didn't find that creativity. We can't feel sorry for ourselves.

"When you are at Man United you are privileged because you are playing for the best club in the world. Sometimes you go through periods like that and it is a test I am sure they are going to come through."

United must regroup to avoid more misery in the FA Cup fourth round against Watford or Tranmere on Sunday before they head to Manchester City looking to overturn a 3-1 first leg deficit in the League Cup semi-finals next Wednesday.

If United are knocked out of both cup competitions, Solskjaer is likely to find the patience of supporters who loved him during his playing days will dwindle even further.

Aware the pressure is mounting, Solskjaer is keen to make signings to bolster his injury-hit squad, with leading scorer Marcus Rashford and star midfielder Paul Pogba both sidelined.

"We are looking to improve, we have got our targets. This is our second defeat at home and first since August. I thought we had turned that corner," he said.

"We have started a clear-out and now I am going to be answering these questions until the window closes. We are working on things.

"For me the most important thing is we have to perform on the pitch. Tonight wasn't good enough for a Manchester United team."

These were the details of the news Manchester United slump to first Premier League home loss to Burnley as Old Trafford turns toxic for this day. We hope that we have succeeded by giving you the full details and information. To follow all our news, you can subscribe to the alerts system or to one of our different systems to provide you with all that is new.