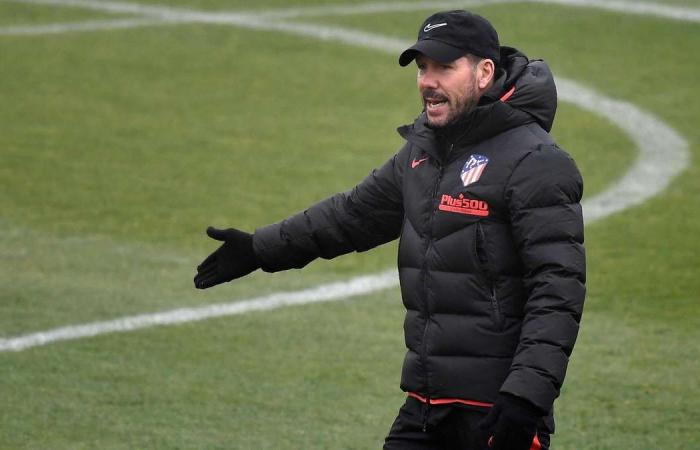 Hind Al Soulia - Riyadh - Diego Simeone has long had one of the most secure jobs in football, but as Atletico Madrid enter a crunch Champions League tie, the Argentine manager is facing doubts about his future.

A 1-0 defeat at home to Barcelona this month dashed Atletico's chances of rejoining La Liga's title race before a draw away at Villarreal on Friday might have made it impossible for another year.

Yet less than an hour after Lionel Messi fired a winner into Jan Oblak's bottom corner, Simeone was framing Atletico's season in a way he had never done previously.

"You have to understand the enormous amount of change that has taken place in the team and we need time to improve," he said. "We must understand we are in a year of transition."

When Antoine Griezmann, Lucas Hernandez, Diego Godin, Rodri, Juanfran and Filipe Luis all departed last summer, the fear was not that Atleti would need time but that they might not recover at all.

The €126 million (Dh513m) Atletico paid Benfica for the Portuguese playmaker increased hope a new era would usher in a new style too.

But Felix was 19, now 20, and in the starting line-up against Barcelona, there was not a single player over the age of 29. More than just experience, Atletico have lost leadership and a sense of identity.

Godin, Juanfran and Filipe Luis were respected figures in the dressing room and three out of the four-man defence that came to define Atletico.

"My Spanish is bad and my words can be confused," said Simeone, referring to the idea of a transition on Friday. "I speak of players like Lodi, who is 21 years old, and has replaced someone like Filipe, who is 34.

"But I have eight years here as a coach and three as a player and anyone that believes the word transition means just sunbathing and waiting for the flowers to come out, they don't know me."

Few would doubt Simeone's sense of urgency but the fate of someone like Arsene Wenger at Arsenal, where Simeone has been linked with a move, shows stagnation even under a cherished coach can only last so long.

Simeone's problem has not just been high expectations. His claims of inexperience would be more persuasive if Atletico were suffering from naivety.

Instead, their weakness, an all too familiar one, has not been in throwing away leads but rather failing to take them.

Tactically, Simeone's tendency is to prioritise solidity at the back but he appears to have been too cautious in the transfer market too.

Alvaro Morata's form has been encouraging but with four league goals, he is already some way behind chief scorers at Real Madrid and Barcelona. Karim Benzema has 11 goals and Lionel Messi 12.

Moves for Zlatan Ibrahimovic and Edinson Cavani in January would add nous and quality but it is likely to be too late in La Liga, and perhaps even in the Champions League.

Atletico play Lokomotiv Moscow on Wednesday, needing a victory to guarantee second place in Group D and a spot in the last 16.

Anything less at the Wanda Metropolitano and they will have to match what Bayer Leverkusen manage at home to Juventus, who are unlikely to be at full strength having already won the group.

In normal circumstances, Atletico would be confident of deeming Leverkusen's result in Germany irrelevant, but disappointment and doubt means faith in the team, and their coach, is wavering. Simeone cannot afford another slip.

These were the details of the news Diego Simeone under scrutiny as Atletico Madrid aim to secure Champions League progress for this day. We hope that we have succeeded by giving you the full details and information. To follow all our news, you can subscribe to the alerts system or to one of our different systems to provide you with all that is new.