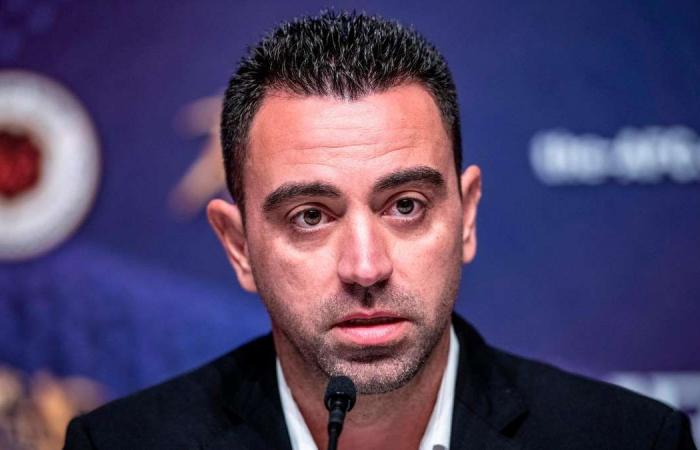 Hind Al Soulia - Riyadh - It took just over 92 minutes of Xavi Hernandez’s fledgling managerial career for him to lose his cool. Quite a spectacle it was, too.

Stoppage time had been reached in the first leg of Al Sadd's Asian Champions League quarter-final against Al Duhail, and, with the seconds ticking down at 1-1, Xavi’s Al Sadd players surrounded the referee to demand a penalty for an opposition handball.

The manager had seen the incident, and agreed. No spot-kick was awarded, and, in his anger, Xavi swung his right leg into a dramatic air-kick next to the touchline, mouthing some earthy phrases in Spanish. At which point his right shoe flew off his foot and high into the sky. That piece of theatre was unintended.

Being Xavi, whose right foot very seldom sent a ball anywhere unintended during his brilliant playing career, he anxiously glanced upwards to see where the black Nike trainer might land. It touched down without hitting anybody, which was a relief.

But they had advanced far enough in the competition to gain the place automatically awarded to a club from the host nation for the Fifa Club World Cup. Al Sadd kick off that tournament in Doha on Wednesday against New Caldedonia’s Hienghene Sport, for the right to play Monterrey of Mexico in the second round.

Some of the passion that left Xavi shoeless back in August should be anticipated on Wednesday evening. There will also be signs of the meticulous, systematic planning that is part of his nature.

At 39, he is clear that his first coaching job, with Al Sadd, is the first stage on a journey with a specific destination. One day, Xavi would like to be manager at Barcelona, the club he grew up supporting, for whom he played 767 matches and won 25 senior trophies, including four European Cups.

It is not arrogance that leads Xavi to declare out loud, barely six months into his coaching career, that the principal seat in the dugout at Camp Nou is his target.

Others with influence have long been saying it on his behalf. Lionel Messi, who now wears the captain’s armband that was once Xavi’s at Barcelona, recently told a Catalan broadcaster that “Xavi will come back here when he wants. He’s learning [management] now and he’ll follow the route Pep Guardiola took.”

Guardiola, who like Xavi went from Barca academy to captaincy and onto coaching the club, has made a similar endorsement of his former protege.

These are not judgments based on his less than a dozen matches in charge of Al Sadd, for whom Xavi played until earlier this year. With Xavi, the assumption of a brilliant future as a coach has been around almost since his teens. Partly, that’s because he was a footballer with such an obvious vision of how games should be controlled and interpreted.

Whether he was at the base of midfield, or as an effective No 10, he played with an unusually broad peripheral vision, and would analyse the tempo, mood and dynamic of a match with rare clarity and maturity.

Almost everybody thought so. Jose Mourinho, who was a young, ambitious assistant at Barcelona when Xavi was graduating towards the first team from the La Masia academy, was struck by the teenager’s precocious sophistication.

Guardiola, Barcelona’s captain in the same period, all but anointed Xavi his successor as curator of the so-called "Barcelona style", prioritising possession and a creative pass-and-move.

He developed leadership, to the benefit of his club - a politically complicated institution - and of Spain, for whom he was a fulcrum of the two European championship winning sides either side of the 2010 World Cup triumph.

His friendship with Real Madrid’s Iker Casillas, captain of those victorious Spain squads, was key to establishing a functioning harmony across the Barca-Madrid rivalry.

Xavi was respected, and calmly authoritative, while always willing to open lively negotiations with any referee he thought had wronged his Barcelona.

All of which burdens Xavi the manager with enormous expectations: the perfect background; the evident intelligence, and all those glittering recommendations from men who played alongside him and coached him. But the theory is one thing, the practice another.

Al Sadd, arguably the strongest squad in the Qatar Stars League, have lost three of their last four league games, and their celebrated young manager has even heard one or two derisory boos from supporters.

Correct that form, overcome the champion club of Oceania on Wednesday and then the Concacaf representatives, Monterrey, and Xavi would find himself patrolling the touchline next week with Jurgen Klopp, whose Liverpool join the Club World Cup for the semi-finals. That is the sort company Xavi wants to be keeping in the not too distant future.

These were the details of the news Xavi's credentials as future Barcelona manager face test at Fifa Club World Cup for this day. We hope that we have succeeded by giving you the full details and information. To follow all our news, you can subscribe to the alerts system or to one of our different systems to provide you with all that is new.