I will die trying to defend my title against Joshua: Ruiz 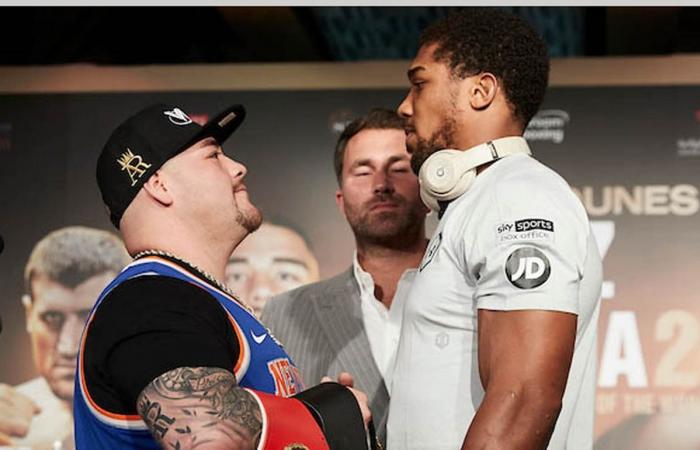 Thank you for reading the news about I will die trying to defend my title against Joshua: Ruiz and now with the details

Aden - Yasmine El Tohamy - World heavyweight champion Andy Ruiz Jr has said he fulfilled a lifelong dream when he triumphed over Britain's Anthony Joshua in June and he would "die trying" to defend his belts in the title rematch in Saudi Arabia on Saturday. "I have been doing this since I was six and it is finally paying off," Ruiz told the BBC. "There is no way I am going to let these belts go, I will die trying. Meanwhile, Anthony Joshua said on Wednesday he will not celebrate if he regains his world heavyweight title, as he faced off with rival Andy Ruiz in a final press conference before their rematch in Saudi Arabia. Joshua seeks to win back the IBF, WBA and WBO titles that he lost to Ruiz in a shock June defeat in New York in a high-profile duel on Saturday, dubbed "Clash on the Dunes". The British boxer, 30, said he was "hungry, determined and focused" as he appeared alongside Ruiz in a press conference in Diriyah, close to the Saudi capital Riyadh. "I am not here to put on a show, I am here to win," he said. "When I regain those belts... I am going to keep calm, stay focused. It's not a time to celebrate. It's a time to keep that challenger mindset and move on to the next target." Ruiz added all the pressure was on Joshua ahead of the rematch. "I know (Joshua) is going to come with a different game plan, I know he's prepared and I know he's motivated," he said. "I know he's lost weight and will try to box me around, but it's just my job to prevent that. I'm ready for whatever comes my way." The rematch will take place in Diriyah, home to a Unesco World Heritage site and a dramatic contrast to the iconic Madison Square Garden which hosted the first fight between the two men which ended in a seventh-round stoppage. In February, the country hosted a first European Tour golf event while the world's most gruelling motor sports race, the Dakar Rally, will be held here in January. Joshua hailed the venue of Saturday's fight in Diriyah.


These were the details of the news I will die trying to defend my title against Joshua: Ruiz for this day. We hope that we have succeeded by giving you the full details and information. To follow all our news, you can subscribe to the alerts system or to one of our different systems to provide you with all that is new.