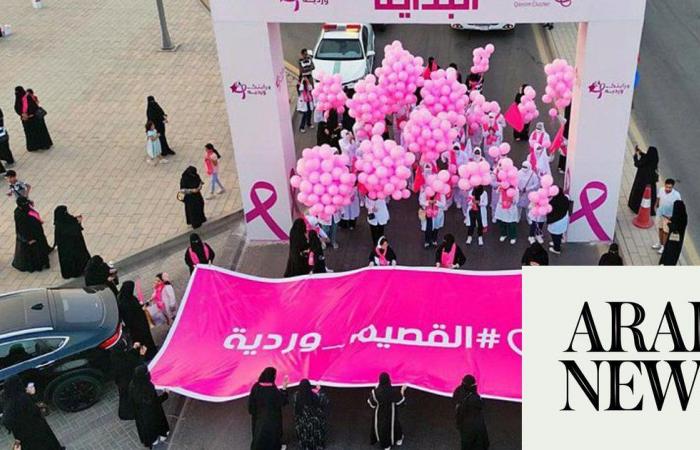 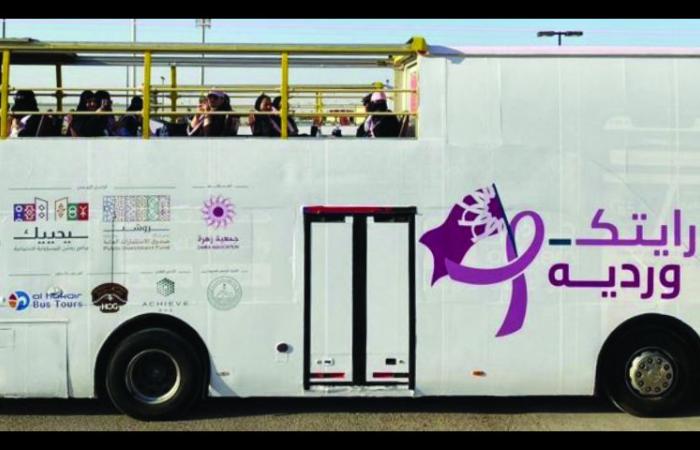 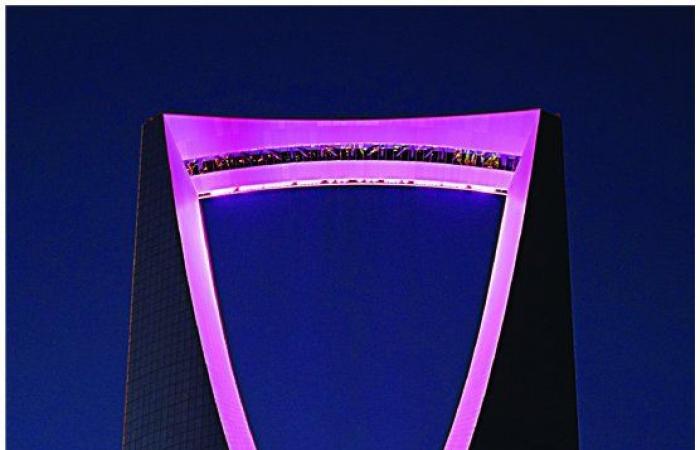 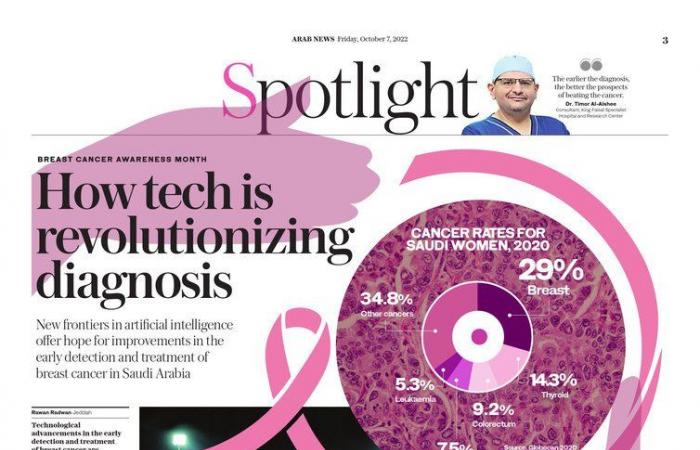 JEDDAH: Technological advancements in the early detection and treatment of breast cancer are radically improving the chances of survival, recovery, and quality of life for women in Saudi Arabia, according to health experts.

Breast cancer is among the biggest challenges facing health systems worldwide. Studies have shown that a girl born today has a one-in-eight chance of developing breast cancer during the course of her lifetime.

According to the World Health Organization, there were 2.3 million new breast cancer cases and 685,000 deaths in 2020. By the end of that year, 7.8 million women had been diagnosed within the past five years, making it the world’s most prevalent cancer.

Over the last three decades, the number of breast cancer diagnoses has risen, mainly due to the increased use of screening, early detection, and better overall public awareness of self-checking and reporting.

In Saudi Arabia, breast cancer is the most common form of cancer among women aged over 40. However, more than 50 percent of cases are detected at a late stage, compared to 20 percent in Western countries, which means the Kingdom has a higher mortality rate.

In most cases, breast cancer does not develop clear symptoms in the early stages. Symptoms usually start to appear only after a tumor begins to grow. But, if detected early, the average recovery rate can be as high as 96 percent.

There are several factors associated with delayed diagnosis. These include age, poor awareness of self-examination and symptoms, social taboos, fear of stigma, and the effectiveness of public health campaigns.

According to a recent study, titled “Breast cancer stage migration in Saudi Arabia: Examining the influence of screening,” published in the Global Journal on Quality and Safety in Healthcare, 2,463 breast cancer cases were diagnosed in the Kingdom between January and December 2017.

However, the study also showed that the diagnosis rate had increased fivefold over a period of 17 years, which could be attributed to an improvement in breast cancer awareness and screening programs in the Kingdom.

“A national screening program in the Kingdom was launched in 2012 and targeted women above the age of 40, ten years younger than those of western countries,” Dr. Timor Al-Alshee, a breast oncology consultant at the King Faisal Specialist Hospital and Research Center in Jeddah, told Arab News.

“Though we don’t know the reasons behind early detection in the Kingdom per se, public health awareness campaigns have immensely changed the way the community sees and understands the disease, but we have a long way to go and efforts are being made to increase awareness every year. But it’s still not enough.”

Al-Alshee said more women are getting regular mammograms, especially those with a family history of breast cancer.

“When it comes to breast cancer, it’s no secret about the implications of late detection and what makes people more comfortable today with their diagnosis is how advanced medicine has recognized there’s no ‘one size fits all’ approach,” said Al-Alshee.

“Today, we have the tools to personalize a treatment plan and it all starts with getting a mammogram.”

Mammography is one of the greatest innovations in breast cancer care, as it is the only screening technology proven to decrease the breast cancer mortality rate and an essential tool for breast cancer detection.

Today, breakthroughs in the detection, diagnosis and treatment of breast cancer with the help of new technologies, particularly artificial intelligence (AI), are improving care even further.

Nearly two years ago, the Saudi Data and AI Authority (SDAIA) began looking into the integration of AI into the breast-cancer screening pathway and has since created an AI system solution that can analyze mammography images and detect abnormalities in scans.

In coordination with the Saudi Ministry of Health (MOH), the SDAIA launched the first phase of the AI system at the Global AI Summit in Riyadh this September.

The system can triage routine mammography exams with a high degree of sensitivity, to support radiologists and oncologists by detecting positively malignant tumors.

With an all-Saudi team, 70 percent of whom are women, the SDAIA has cooperated with specialists to validate the results and to ensure that the AI system is integrable and can be quickly adopted across all systems.

“In its initial phase, the AI system is used in cooperation and is limited to two entities: The National Program for Breast Cancer Detection under the MOH and the Seha-Virtual-Hospital,” the SDAIA told Arab News.

“We seek to make the system available on a national scale, which will require enhancements to scale it up and develop further through the help of local partners. The system is currently working on the screening phase and we’re working to add more features to help with the national efforts to screen 4 million women (above 40 years of age) in the Kingdom.”

Healthcare providers usually meet to discuss cancer cases and evaluate information to determine a diagnosis, the best treatment, and care plan for an individual patient. This process can take several weeks.

"We’re looking at an 80:20 ratio where 80 percent of the cases can be excluded by the same and the other 20 percent will be the main focus for physicians eventually,” the authority said.

With the AI model system, the screening time will be drastically reduced, and with further enhancements and developments provided by national developers, additional features can be added to the system to increase innovation.

“By coordinating with specialists, we’re training the algorithms to for example detect pathologically proven cancers by mimicking human behaviors and practices. We’re using screening data, diagnostic data, investigations, and more to train the system. The accuracy of AI should exceed the accuracy of radiologists in some cases.”

A common concern for screening efficacy  is tissue density. Women with dense tissue have a higher risk of breast cancer misdiagnosis, making it harder for radiologists to see cancer on mammograms.

According to a 2020 paper published in the medical journal European Radiology, 22 percent of the screen-detected cancers are missed, based on a review of prior screening mammograms with diagnostic images.

“Breast density makes the screening test a little more challenging for radiologists and especially for women younger than 50. They may be called back for a follow up,” said Al-Alshee. “The difference between screening today and a decade ago is the advancement in technology that can interpret digital mammograms.

“Advancements also include developing individual treatment plans with less aggressive side effects such as targeted therapies to block the growth of breast cancer cells, new therapeutic approaches in surgeries such as conservative mastectomies for the aesthetic satisfaction of breast cancer patients coupled with the oncological safety, and many more advancements thanks to modern medicine,” he added.

Beyond detection, emerging technologies are also radically improving breast cancer care. The expansion of targeted therapies has increased treatment options for patients, as new areas of research ranging from immunotherapies, to vaccines, and recurrence prevention are being explored.

“Our vision is clear. We want to save lives,” said Al-Alshee. “Once a patient gets a confirmed diagnosis early, they will find the best treatment in the comfort of their home, surrounded by their loved ones, and with a very supportive ecosystem.

“The earlier the diagnosis, the better the prospects of beating the cancer. Coupled with today’s advancement in technology, the success rate will be even greater.” 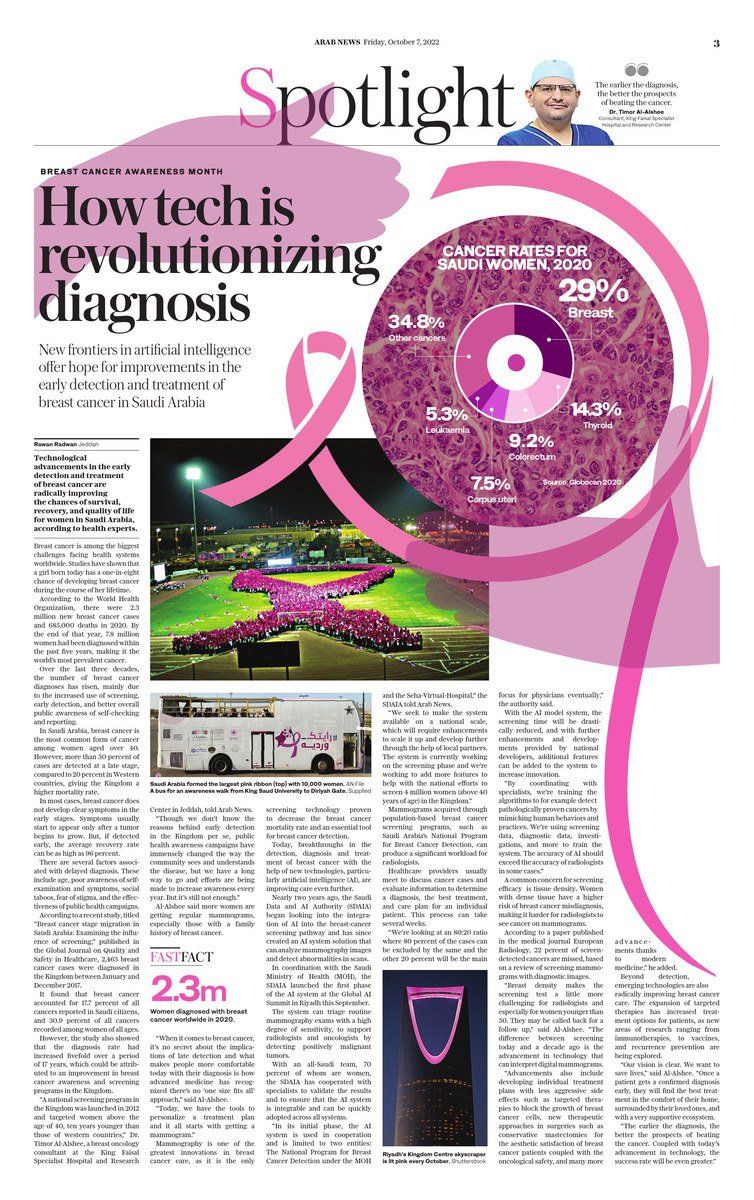 These were the details of the news Saudi Arabia’s Qassim launches breast cancer awareness campaign  for this day. We hope that we have succeeded by giving you the full details and information. To follow all our news, you can subscribe to the alerts system or to one of our different systems to provide you with all that is new.