Top 5: Al-Jubeir talks to CNN about America’s policy towards Saudi... 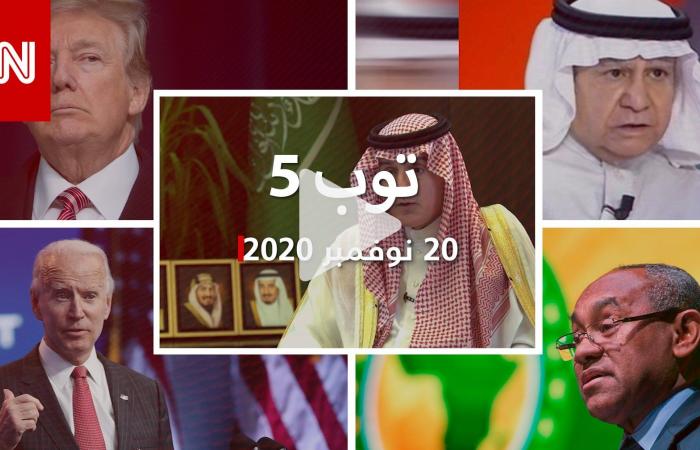 (CNN) – From the expectations of the Saudi Minister of Foreign Affairs, Adel Al-Jubeir, of America’s upcoming policy towards the Kingdom, and a new tweet by Turki Al-Hamad on the authority of Imam Al-Bukhari, leading to Trump’s certainty that he lost the elections to Biden, and transferred the African Super Cup from Qatar to Egypt .. Here is a summary My Day from CNN in Arabic addresses some of the most prominent diverse stories from the Middle East and the world.

Does Saudi Arabia expect a change in America’s policy towards the kingdom? … Al-Jubeir explains to CNN

The Saudi Minister of State for Foreign Affairs, Adel Al-Jubeir, clarified his country’s position with regard to America’s policy towards the Kingdom, noting that his country “deals with the President of the United States as a friend, whether he is a Republican or a Democrat,” stressing that there are common interests between the two countries, and that “it did not work. Two countries are fighting terrorism and extremism more than the United States and Saudi Arabia. ”

The Saudi writer and political analyst, Turki Al-Hamad, said that his tweet about Imam Al-Bukhari, which sparked a wave of strong criticism of him, was “incorrectly” understood.

Trump close to CNN: The president knows he lost but wants to harm the Democrats

A source close and familiar with the thinking of US President Donald Trump revealed that the latter knows that he lost the presidential elections to his rival Biden, but that he is delaying the process of transfer of power and is trying hard to cast doubt on the election results in order to undermine the Democrats who questioned his legitimacy after the 2016 elections.

Senior advisor to President-elect Joe Biden, Bob Bauer, warned that “there is damage to the democratic process,” and criticized President Donald Trump’s legal efforts to block the certification of the election results and declare Biden the winner of the race.

The Confederation of African Football (CAF) officially announced, on Friday, the transfer of the African Super Cup from Qatar to Egypt.

These were the details of the news Top 5: Al-Jubeir talks to CNN about America’s policy towards Saudi... for this day. We hope that we have succeeded by giving you the full details and information. To follow all our news, you can subscribe to the alerts system or to one of our different systems to provide you with all that is new.