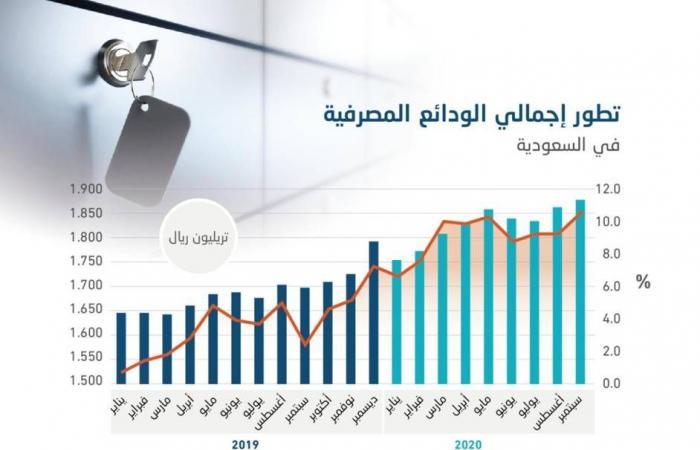 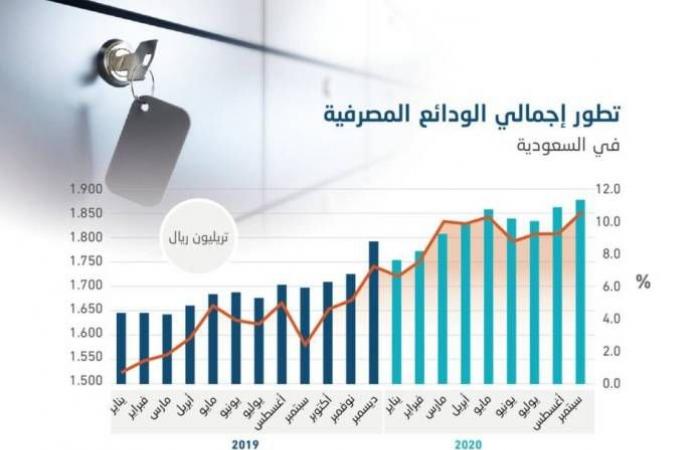 Deposits with banks operating in Saudi Arabia recorded a growth during the third quarter of the current year 2020 by 10.7 percent on an annual basis, bringing the total deposits to the level of 1.881 trillion riyals, compared to about 1.69 trillion for the same period, an increase of about 181.8 billion riyals.
According to the monitoring unit of the reports in Al-Eqtisadiah newspaper, based on the data of the Saudi Arabian Monetary Agency (SAMA), deposits recorded growth for the sixth consecutive quarter, after recording a growth of about 2.1 per cent compared to the previous quarter.
Quarterly growth is the highest growth in three quarters, as deposits grew in the second quarter by about 1.8 percent and about 0.8 percent during the first quarter.
This growth was supported by the growth in demand deposits during the third quarter by about 12.1 percent on an annual basis, as well as a growth in savings deposits by 4.8 percent, while foreign currency deposits grew by 10.7 percent.
On a monthly basis, total bank deposits grew by 0.8 percent, to record growth for the second consecutive month, as they increased by 15.17 billion riyals in September compared to August.
Individual and corporate demand deposits supported the growth of deposits after recording a level of 1.09 trillion riyals, an increase of 11.3 billion riyals over the previous month.
Deposits at Saudi banks are divided into three main types: demand deposits, or as they are known as free deposits, and time and savings deposits, in addition to a third type called other quasi-cash deposits that include deposits in foreign currency and deposits against documentary credits and existing transfers, as well as repo operations executed with the sector. The private.
Demand deposits account for about 65.1 percent of total deposits at the end of the third quarter of this year, while they were about 64.3 percent for the same period last year, while foreign deposits were stable at 8.18 percent of total deposits by the end of the third quarter.
Historically, bank deposits grew during the past year by 7.3 percent compared to 2018, marking the highest annual deposit growth since 2014.
The growth of bank deposits in Saudi Arabia improved for the second year in a row from the lowest annual growth achieved in 2017, “the lowest growth rate according to available data since 1992”. However, growth rates are still less than the average of the previous ten years in which growth exceeded 10 percent. Approximately for the period extending from the year “2005-2014”.

These were the details of the news 1.88 trillion riyals of bank deposits in Saudi Arabia by the... for this day. We hope that we have succeeded by giving you the full details and information. To follow all our news, you can subscribe to the alerts system or to one of our different systems to provide you with all that is new.