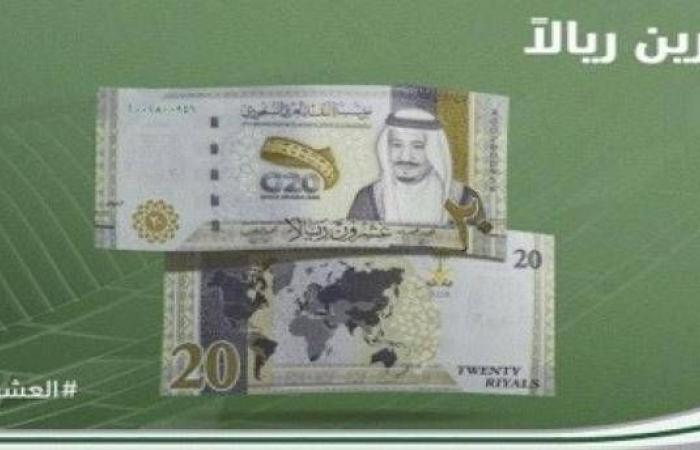 The Saudi Arabian Monetary Agency “SAMA” announced its intention to offer the twenty riyal denomination of Saudi paper currency, on the occasion of the Kingdom of Saudi Arabia’s presidency of the G20 summit, during the era of the Custodian of the Two Holy Mosques King Salman bin Abdulaziz Al Saud, based on Article (4) of the monetary system Saudi issued by Royal Decree No. 6 on 01/07 / 1379H.The Monetary Agency stated that the commemorative twenty riyal denomination will be offered and circulated as of Sunday 08/03/1442 AH corresponding to 25/10/2020 AD, along with the currently circulating banknotes in all its denominations as official legal currency.

Sama confirmed that this category was printed according to the latest standards in the field of printing banknotes, as it is characterized by many technical specifications, high-quality security signs, and a distinctive purple-colored design that highlights the aesthetic of decorations inspired by the G20 summit logo. Pointing out that the design of the twenty-riyal denomination paper included an image of the Custodian of the Two Holy Mosques King Salman bin Abdulaziz Al Saud on the face of this category, and the slogan of the Kingdom’s Presidency of the Group of Twenty (G20) in 3D. The back of the paper included a world map, showing the G20 countries in a different color. The map of the Kingdom shows that radiation emanates from it, symbolizing the meeting point of these countries on their land, and the importance of the Kingdom as a source of civilized and economic radiation.

These were the details of the news The launch of the 20 riyal denomination of the Saudi currency... for this day. We hope that we have succeeded by giving you the full details and information. To follow all our news, you can subscribe to the alerts system or to one of our different systems to provide you with all that is new.