To be ignorant that the provider is God 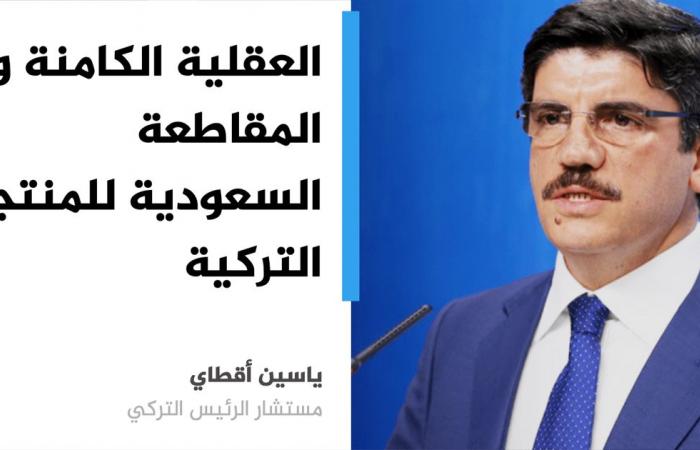 News came about the pressure campaign, led by businessmen and officials in the trade sector, along with some companies, to boycott Turkish products. This campaign coincides with another campaign on social media platforms under the hashtag “boycotting Turkish products”, and it enjoys semi-official support, although the Saudi authorities have not announced this.

This campaign is led on social media by the head of the Saudi Chambers of Commerce, Ajlan bin Abdulaziz Al-Ajlan, along with some close to the royal family. Al-Ajlan, who also heads the Riyadh Chamber of Commerce, called on October 3, at his expense, to “boycott Turkey in the fields of import, tourism and investment,” noting that these moves are a national duty for every Saudi citizen.

Ostensibly, this campaign appears to be emanating from Saudi citizens and others, who want to boycott Turkish products; But it is not, in fact, so, because the Arab people had previously expressed their support for Turkey by publishing the hashtag “Supporting Turkish Products”, which was widely spread more than the alleged boycott campaign.

Ajlan’s moves cannot be part of the framework of freedom of expression without being directed by the decision-making center in Saudi Arabia. The persistence of the authorities in Riyadh in denying their involvement in the “banning Turkish products” campaign is due to the fact that these moves are illegal according to the binding provisions in international trade agreements. And free trade agreements.

Ostensibly, this campaign appears to have been issued by Saudi citizens and others, who want to boycott Turkish products; But it is not, in fact, so, because the Arab people had previously expressed their support for Turkey by publishing the hashtag “Supporting Turkish Products”, which was widely spread more than the alleged boycott campaign.

Turkish products are very popular among the Arab masses for several reasons, the first of which is their high quality without any doubt, and any government campaign to boycott products of this quality will be doomed to failure. The quality standards enjoyed by Turkish products today, along with their attractive aesthetic dimensions, make them a strong competitor to European-made products, and this means that any attempts to prevent the consumption of Turkish products will succeed in the beginning in reducing the masses’ demand for them. But that won’t last long.

Secondly, Turkey’s policy of supporting the oppressed in various parts of the world, from Palestine, Syria, through Qatar, to Somalia and Libya, has contributed to making it gain the support of the Arab peoples, and this may be reflected in the words of a Saudi citizen who wrote in response to the boycott campaign, “Saudi Arabia did not boycott the products of France.” Which the president of its republic did not hesitate to insult the Prophet (peace and blessings be upon him), or Iran’s Shiite products that continued to attack the Islamic world and Muslims everywhere, or the products of China that killed Uyghur Muslims, or the products of the United States and Israel that attacked Jerusalem and occupied Jerusalem. Palestine; but on the other hand, it boycotts Turkey’s products, the only country that defends and defends Muslims, why? ”

A lot of criticism is spreading on social media platforms, without some Arab leaders realizing that by taking such steps – thinking that they will undermine Turkey’s position in the hearts of the people – they are in fact humiliating themselves and demeaning themselves in the eyes of their people, and by talking about the boycott campaign that Led by Saudi Arabia, it is also worth touching on another sick mentality that drives such moves (putting themselves in the place of God the Provider). It is God who granted them this wealth and made it a test for them. On the other hand, they were struck by arrogance and arrogance, forgetting that the one who sustains them is able to regain his livelihood whenever he wants.

The infidels of Quraish have previously followed this method to dissuade the Messenger ﷺ and whoever embraces Islam with him on the path of truth, and whoever was familiar with even a little bit of the prophetic biography knows the result of these attempts. Those who have this mentality, who are ignorant that God is in His hand, are the same who, not long ago, made restrictions on and boycott Qatar. It is an illusion of the power of money that makes them think that they can tame whoever they want, do whatever they want and buy people’s debts.

It is clear that Saudi Arabia is still angry with Turkey over the murder of journalist Jamal Khashoggi. In fact, they stand an obstacle to achieving justice and revealing the culprits, who killed an innocent soul on Turkish soil, so is the reason for their anger and anger is Turkey’s pursuit of justice? Are they waiting for Turkey to turn a blind eye to this brutal crime, which was committed against an innocent person on its territory? Or are they waiting for her to stop pursuing the perpetrator?

Turkey seeks to show truth and establish justice, and their hatred of Turkey, or their seeking to punish it for seeking to implement justice, or considering themselves the owners of livelihood by cutting off the path to Turkish products is nothing but ignorance. Turkey will be keen to show the truth, albeit in itself, and achieve justice. We face these challenges daily, and despite all the obstacles and boycott campaigns waged against them, Turkey is still standing tall and its economy is one of the most sustainable economies.

We can look at the matter as a gift and a divine sermon, as Turkey discovered in the Black Sea the largest gas reserves throughout history. These are all messages for those who are aware and sane, and blessed is the one who understands the message and realizes that God alone is the provider.

These were the details of the news To be ignorant that the provider is God for this day. We hope that we have succeeded by giving you the full details and information. To follow all our news, you can subscribe to the alerts system or to one of our different systems to provide you with all that is new.