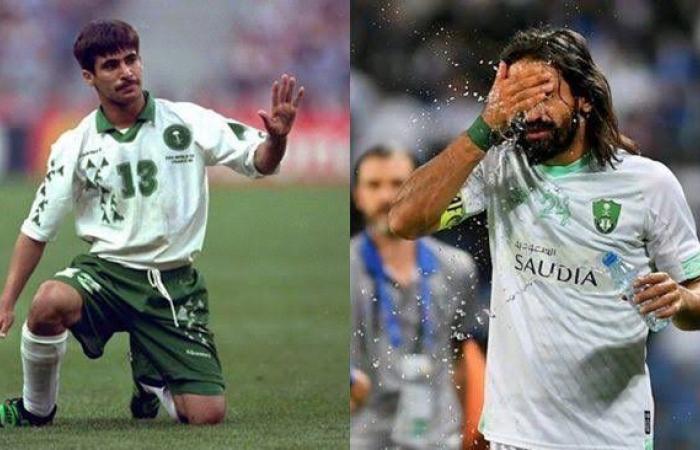 Saudi 360 – Veteran Hussein Abdul Ghani, the Al-Ahly player, decided to retire permanently from the game of football after a career in the stadiums that extended for 25 years of tireless giving, whether with the national team or the clubs he represented, specifically Al-Ahly and Al-Nasr.

Abdul-Ghani announced his official retirement decision during a television interview, where he stressed the difficulty of making this decision and entering into a psychological struggle due to his intense love for the game of football.

Abdul-Ghani, “43,” is considered one of the most prominent and strongest players in the Arab stadiums. He was known to play enthusiastically and fiercely for the last minutes of the matches, and he did not spare any effort in favor of the shirt he wears.

We show you our esteemed followers on the site Sport 360 All you need to know about the life of the recently retired Captain Hussein Abdul Ghani:

– Hussein Omar Abdul-Ghani Suleiman, born in Jeddah on January 21, 1971, i.e., “43 years old”, knows how to play in the left-back position, and they nicknamed him The golden boy and Ayoub the stadiums and the Fedayeen.

– Abdul-Ghani was in the Cubs of Al-Ahly Club, then the youth team, through his rise to the first football team in 1995, and he was in his early days playing as the striker, but coach Amin Dabo decided to transfer him to the left-back position, to become after that the best left back that Saudi Arabia has produced.

A contemporary of Abdul-Ghani during his time with Ahly Between 1995 and 2008, several prominent names such as Khaled Massaad, Shellya, Sweden and others, and contributed to the achievement of many local championships with Al-Raqi. He also fought a short loan period with Al-Rayyan of Qatar in 2007 and played only one match against Al-Arabi in the quarter-finals of the Emir of Qatar Cup and missed Then a penalty kick.

– Abdul-Ghani had a successful professional experience with the Swiss Neuchatel during the 2008/09 season, during which he fought 19 matches without contributing goals. He also became the third Saudi player to play in Europe after Yami Al-Jaber and Fahd Al-Ghishian at the time, then returned to the Saudi League, but through the victory gate in a big surprise to Al-Ahly fans. She wanted the player to retire in the classy shirt.

– In September 2017, he signed a one-year contract with Feria Bulgarian, where the player hoped to reserve his place in the list of the team participating in the 2018 World Cup in Russia, then in the summer of 2018 he joined Uhud and in January 2019 he returned to Al-Ahly Club, his first home.

Abdul Ghani announced his retirement from international football after failing to lead his country to the 2010 World Cup in South Africa, and the player appeared in the national team shirt during his career in 138 matches and scored 5 goals during them.

Victory: He played 205 matches in various competitions and scored 9 goals

One of: He played 11 matches, scored one goal and scored another

Bulgarian veria: He played only 13 games during a season

Neuchâtel Zamax: He played 19 matches and scored a goal

Abdelghani was also chosen as the best Arab player in the World Cup twice in the 1998 and 2006 editions.

As for his personal life, Hussein Abdul-Ghani has been married since 2000, and he has four children: Omar, Uday and Muhammad, the youngest of whom is Yazid, and he has a son who plays with Al Ittihad.

Announcing his retirement and responding to his accusation of sacking coaches:

Hussein Abdul-Ghani He officially announced his retirement as a guest on the “Koura” program on the Gulf Rotana channel, where he said: “I decided to stop practicing football, and I think that this is difficult for any player, but it was a necessary decision, a very difficult decision that came after Thinking for a long time and some objected to this decision, but I see it as the right time to announce my final retirement. I was in a great struggle with myself when I thought about it.

Abdul-Ghani responded to his accusation of causing the dismissal of coaches, stating: “I did not go to any club except and they said about me that I am the reason behind the dismissal of coaches, but I challenge any club president or coach who says that one day I told him to play me, whether foreign or national, I was wronged in the presence of the coach Zoran, at the time I told Prince Faisal, we must explain to the fans what the coach did.

Hussein Abdul-Ghani confirmed that he does not care about what is said on social media, so he carries a simple mobile that does not have any social media programs, indicating that he prefers to follow the opinions of the public on the street and always leaves his mobile in the car when he enters the stadium, and said: “The player’s role responds to The criticism is at his level on the field only. “

let Alahli football club His captain, Hussein Abdul-Ghani, said in an official statement, stressing that the player’s distance will only be from the green rectangle and that the golden boy will remain in love and support for Al-Raqi’s career while the administration intends to benefit from his long experience.


These were the details of the news Al-Ahly Club news: Hussein Abdul-Ghani … the Saudi football guerrilla ends... for this day. We hope that we have succeeded by giving you the full details and information. To follow all our news, you can subscribe to the alerts system or to one of our different systems to provide you with all that is new.