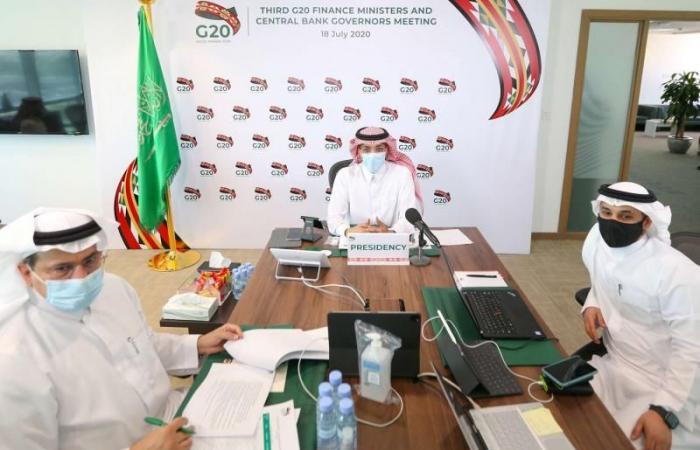 The virtual talks, hosted by current G20 president Saudi Arabia, also include virtual global interfaith talks to discuss the relationship between religions, with no political agenda.

The meeting of finance ministers and central bankers comes a day after the International Monetary Fund (IMF) warned that global GDP would contract 4.4% in 2020 and the damage inflicted by the pandemic would be felt for years.

The meeting will “discuss updates to the G20 Action Plan — supporting the global economy through the COVID-19 pandemic,” G20 organisers said in a statement.

The group will also discuss “the progress made on the G20 Debt Service Suspension Initiative (DSSI) and its proposed extension into 2021,” the statement added.

The 20 most industrialised nations had pledged in April to suspend debt service from the world’s poorest countries through the end of the year as they faced a sharp economic contraction caused by the pandemic.

The World Bank and campaigners have called for the debt suspension initiative to be extended through the end of 2021, while charities such as Oxfam say it needs to be stretched through 2022.

But World Bank President David Malpass on Monday warned G20 countries may only approve a six-month debt relief extension because “not all of the creditors are participating fully” to help poor nations weather the health crisis.

“I think there will be compromise language (on) maybe a six-month extension that can be renewed depending on debt sustainability,” Malpass said.

The DSSI has received 46 applications from eligible countries across the world, most of them from Africa, the G20 said last month.

But global campaigners have criticised the group for doing little to help poor countries stave off the knock-on effects of the pandemic.

Huge injections of government aid have kept economies from plunging further in 2020, but the continued presence of COVID-19 means the outlook is highly uncertain, the IMF said in its latest World Economic Outlook on Tuesday.

The recession has been less severe than expected but still deep and “the ascent out of this calamity is likely to be long, uneven, and highly uncertain,” IMF chief economist Gita Gopinath said.

The World Bank on Monday said the debt of the world’s 73 poorest countries grew 9.5% last year to a record $744 billion, which shows “an urgent need for creditors and borrowers alike to collaborate to stave off the growing risk of sovereign-debt crises.”

The countries’ debt burden owed to government creditors, most of whom are G20 states, reached $178 billion last year, it added.

Last month, G7 finance ministers said they “remain committed” to the DSSI while again calling for private creditors to implement the plan.

But Malpass has decried a lack of participation by private sector creditors, while adding that wealthier countries are not doing their full share.

As part of its presidency this year of the Group of 20 leading rich and developing nations, Saudi Arabia is hosting a virtual global interfaith forum.

The online event began on Tuesday, with participation from Muslim clerics, Jewish rabbis, Christian priests and others religious figures.

Saudi Arabia has embarked more assertively in recent years on an outreach campaign to Jewish and Christian groups. Some of those efforts have coincided with a broader alignment of interests and emerging ties between Gulf Arab states and Israel, which share a common foe in Iran.

Saudi Crown Prince Mohammed bin Salman bin Abdulaziz has also overseen efforts to supplant a religiously conservative Saudi identity with one rooted in hyper-nationalism, following decades of adherence to a hardline interpretation of Islam known as Wahhabism, which has flourished in the kingdom.

Faisal bin Muaammar, who heads the Saudi-funded International Dialogue Centre organising the five-day forum, said the purpose of the event is to enhance relationships among different faiths.

“We are talking about a relationship between religions, between Muslims, Christians, Jews, Buddhists, and Hindus. The dialogue has no political agenda at all, or a political direction in terms of political conversations or negotiations,” he said.

Still, he said interfaith forums like this can help build bridges between people and countries.

“If it is used for the right reasons, the input of religious leaders or religious parties is excellent for any peace process in the world,” he said.

The event had been envisioned to be held in the Saudi capital Riyadh, a rare gathering of diverse religious figures in the conservative Islamic nation.

However, due to the coronavirus pandemic, the forum is being held virtually like other high-profile G-20 events hosted by Saudi Arabia.

Speakers at Tuesday’s opening session included the Saudi religious affairs minister, the secretary-general of the Saudi-based Muslim World League, the grand mufti of Egypt, archbishop of Constantinople-New Rome and ecumenical patriarch, the president of the Conference of European Rabbis,and UN representatives.

These were the details of the news Saudi Arabia hosts G20 finance ministers’ virtual talks for this day. We hope that we have succeeded by giving you the full details and information. To follow all our news, you can subscribe to the alerts system or to one of our different systems to provide you with all that is new.