Saudi Arabia is looking to raise investments in Iraq to 2.6... 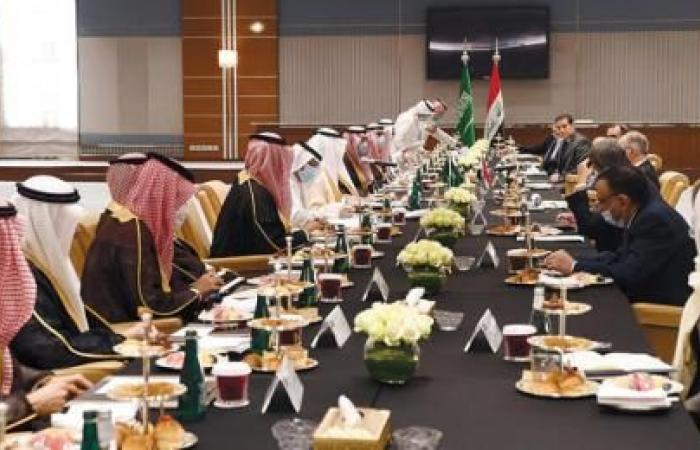 A joint coordination committee revealed that Saudi Arabia is looking forward to raising investments in Iraq to 10 billion riyals (2.6 billion dollars), calling for the importance of speeding up the formation of the joint business council and facilitating the work of Saudi companies and the private sector, at a time when Iraq highlighted an investment portfolio of 6 thousand projects worth 100 Billion dollar.
Yesterday, the second meeting of the Economic, Trade, Investment and Relief Committee of the Saudi-Iraqi Coordination Council was held in the capital, Riyadh, headed by the Minister of Investment, Chairman of the Committee for the Saudi side, Engineer Khaled Al-Falih, and the Iraqi Minister of Planning, Dr. Khaled Battal Al-Najm.
Al-Falih stressed the importance of developing relations between the two countries in all its aspects through the work of the committees emanating from the Saudi-Iraqi Coordination Council, stressing commitment to implementing the work assigned to the committee by the Saudi side of the Coordination Council, and continuing to work to facilitate the economy, investment, trade, development and relief, and to develop them according to executive programs and plans with indicators Performance and specific timetables for implementation in accordance with a clear governance framework for both sides, in order to enhance the strategic integration between Saudi Arabia and Iraq.
Al-Falih explained that the Saudi side has worked on many tasks assigned to it since the end of the work of the Coordination Council from its third meeting in Riyadh on the twentieth of July (July) last, indicating that the business sector in the Kingdom is interested in investment opportunities in Iraq, especially in the field of energy and industry. Mineral wealth and agriculture.
He pointed out that there are a number of companies investing in Iraq now, and there is also a real desire for a number of Saudi companies to expand their investments in Iraq, as despite the challenges, there are Saudi investments in Iraq that exceed two billion riyals in size, stressing that the ambitions are much higher. This confirms the Saudi side’s keenness on additional investments that are expected to reach 10 billion riyals (2.6 billion dollars) approximately in various sectors.
Al-Falih, Chairman of the Committee, explained the importance of strengthening the economic partnership between the two countries to serve the business sector, and the importance of speeding up the formation of the Saudi-Iraqi Business Council in line with aspirations, as well as enabling the Saudi private sector to invest in Iraq and expand that through what is provided by the agreement to encourage and protect mutual investments. Between the two countries that require approval by the Iraqi side. Al-Falih explained that the trade exchange between the two countries is less than expected. As the Kingdom’s exports to Iraq represent a very small percentage in the Iraqi market compared to neighboring countries, which require addressing the challenges facing Saudi exports, including preventing the import of some goods and imposing high fees to protect a local product on a number of goods.
Al-Fayez expressed his optimism that the committee’s work would contribute to increasing the economic growth of the two countries through the opening of the “New Arar” port and its readiness on both sides, including the complementary works of clearing, transporting, handling and operating for maintenance purposes, praising the growth in the number of flights between the two countries that jumped to nearly a percentage 20 percent, from 3,566 flights last year, 2019.
The minister pointed out the readiness of the Saudi Development Fund to accelerate the financing of development projects in Iraq, according to the mechanism followed by the fund.
For his part, the Iraqi Minister of Planning, Chairman of the Committee on the Iraqi side, Dr. Khaled Al-Najm, confirmed the interest that Iraq is receiving from Saudi Arabia, explaining that Iraq is looking forward to Saudi investments and that it will work with members of the committee and the relevant authorities in Iraq to urgently solve the challenges and obstacles that he referred to. Chairman of the committee for the Saudi side.
Al-Najm explained the importance of opening a new port in Arar due to its positive repercussions on the economy of the two countries, noting that there are more than 6 thousand projects whose value exceeds $ 100 billion that require foreign investments, adding that the Kingdom is one of the countries that Iraq is looking forward to seizing the opportunities of current projects. Al-Najm stressed the importance of activating the Saudi-Iraqi Business Council and its desire to find joint work between the National Investment Commission in Iraq and its counterpart in the Kingdom, indicating that the National Investment Commission in Iraq has directed work with Saudi investors, whether to solve challenges or work on investment opportunities in Iraq. Al-Najm indicated that Iraq is currently reviewing the regulations, among which is the public-private sector partnership system that will enable more investments, revealing the follow-up of the committee’s work through working groups that meet on a monthly basis and easy mechanisms to follow up on initiatives and commitments, evaluate projects, and consider legislation and its potentials.

These were the details of the news Saudi Arabia is looking to raise investments in Iraq to 2.6... for this day. We hope that we have succeeded by giving you the full details and information. To follow all our news, you can subscribe to the alerts system or to one of our different systems to provide you with all that is new.