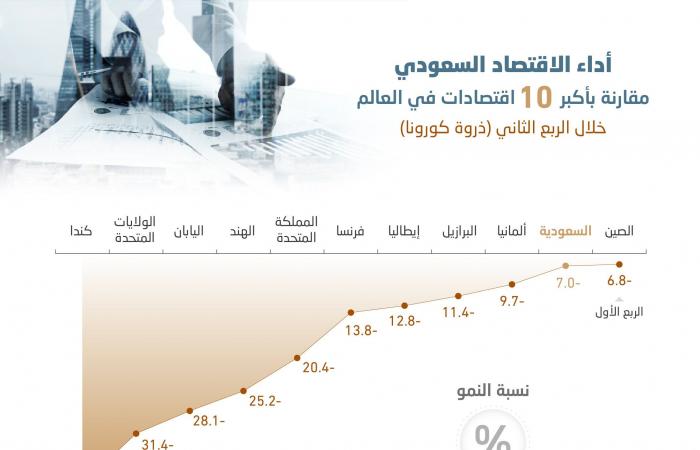 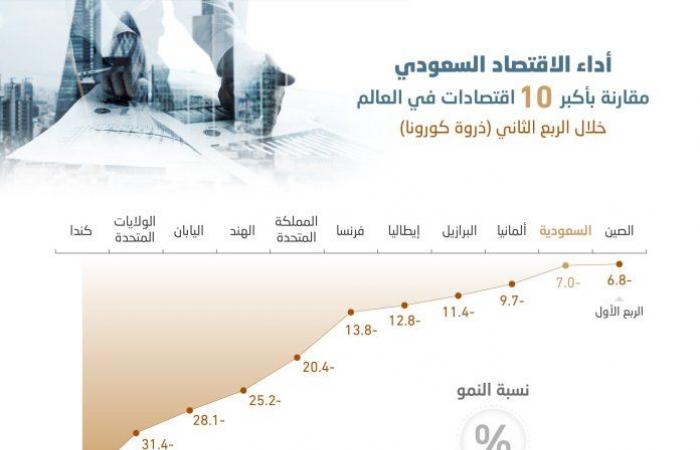 The Saudi economy outperformed compared to the ten largest economies in the world during the second quarter of this year, which is the height of the impact of the Corona pandemic on global economies.
According to the analysis of the reports unit in Al-Eqtisadiah newspaper, based on the data of official statistical authorities in the countries covered by the analysis, the Saudi government was able to mitigate the impact of the pandemic on the economy through economic stimulus packages worth billions of riyals.
Although the Saudi economy contracted 7 percent during the second quarter, it was better in terms of economic performance in nine of the ten largest economies in the world, while only the Chinese economy surpassed it with a growth of 3.2 percent.
But the peak of the Chinese economy being affected by the virus was in the first quarter, during which it contracted by 6.8 percent, and therefore the Saudi economy is the second best performance compared to the top ten in the world during the height of the pandemic.
All the economies covered in the report shrank during the height of Corona, and came in order as follows: China -6.8 percent, Saudi Arabia -7 percent, Germany -9.7 percent, and Brazil -11.4 percent.
Behind it came Italy with an economic contraction of -12.8 percent, France -13.8 percent, the United Kingdom -20.4 percent, India -25.2 percent, Japan -28.1 percent, and the United States the most contracting by -31.4 percent during the second quarter of this year. , Compared to the same period last year.
The Saudi gross domestic product at constant prices reached 597.8 billion riyals in the second quarter of this year, compared to 642.8 billion riyals in the comparative quarter of last year 2019, shrinking by 7 percent, while it shrank 4 percent during the whole first half.
The second quarter is the worst season affected by the “Corona” virus, while the coming quarters are expected to be the best performance.
The shrinkage in the Saudi economy came due to the shrinkage of the oil sector by 5.3 percent, due to the significant decline in oil prices and the commitment to the “OPEC +” agreement to reduce production to face the repercussions of the Corona pandemic.
As for the non-oil sector, it shrank by 8.2% due to a contraction of the private sector by 10.1%, and the government sector by 3.5% in light of complete closure during the second quarter.
The contraction of the non-oil sector, especially the private sector, came in light of the almost complete closure of economic activities in the second quarter due to the outbreak of “Corona”.

What does GDP mean?

GDP is defined as the market value of all locally recognized final goods and services that are produced in a country during a specified period of time.
The nominal GDP, “current prices”, is that which is evaluated at current market prices. As for the real GDP, “constant prices”, it measures the actual quantities of goods and services produced at constant prices for a specific year, which is 2010 relative to the Saudi GDP.
The GDP indicators are estimates of the quarterly GDP at “current and constant” prices. They show the aspects of spending on the GDP and measure the contribution of economic activities and the various organizational sectors to it.
And publishing the indicators on a regular basis aims to provide updated quarterly estimates of GDP at “current and constant” prices and the contribution of various economic activities and organizational sectors to it, and to provide quarterly modern economic indicators, such as GDP growth rates and the relative contributions of economic activities and various organizational sectors to the GDP. Total, providing all these data to support decision-makers and policy-makers in various areas of development.

These were the details of the news Saudi Arabia achieves the second best performance compared to the 10... for this day. We hope that we have succeeded by giving you the full details and information. To follow all our news, you can subscribe to the alerts system or to one of our different systems to provide you with all that is new.