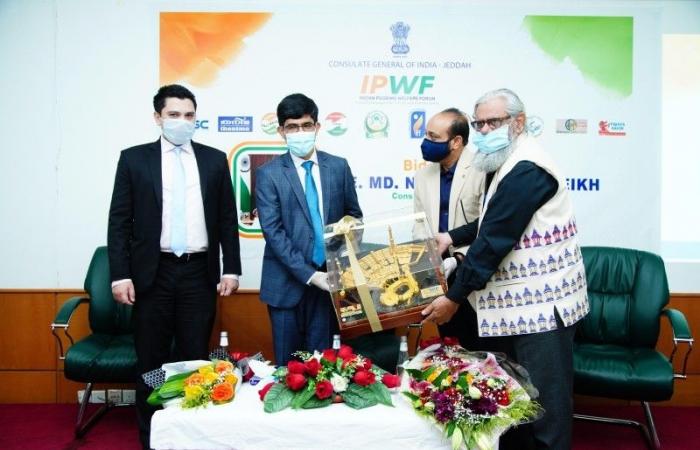 We show you our most important and recent visitors news details Haji was the center of my 8-year tenure, says outgoing Indian CG in the following article

JEDDAH – "In the entire eight years of my diplomatic tenure in Saudi Arabia, first as consul of Hajj and then as consul general, I kept Hajj pilgrim as the center of everything," outgoing Indian Consul General Mohammed Noor Rahman Sheikh has said.

Talking exclusively to Saudi Gazette before his departure from the Kingdom on Monday afternoon, Sheikh spoke at length about significant improvements made in the entire gamut of bilateral relations between India and Saudi Arabia and the qualitative leap in services being offered to one-million strong Indian community in the western region of Saudi Arabia as well as to Hajj pilgrims.

Sheikh said that the Indian embassy in Riyadh will manage the affairs of Hajj of 2020 with facilitating performance of the upcoming pilgrimage by a limited number of Indian pilgrims. He said the Saudi government has done the best of what it could do, as per the laid down COVID-19 protocols in a very professional and careful manner. “When we examine the procedures followed by the government in the enforcement of lockdown and its gradual relaxation, we can see that a lot of confidence and competence were exhibited in handling the pandemic situation.”

Appreciating the Saudi leadership for its successful handling of the situation in the most efficient and scientific way, the official pinned great hope that the Indian community in the Kingdom would overcome the pandemic crisis and would continue to play its monumental role in the Kingdom’s development process. “It will take some more time to return to normalcy but there will be recovery. Despite all the limitations, things will improve and Indians, in their capacity as the largest and the most respectable expatriate community here, would have to play a much greater role in this blessed country. I am sure Indian community will work hand in hand with the Saudi government and people as a partner in the ambitious future development projects under the visionary leadership of Custodian of the Two Holy Mosques King Salman and Crown Prince Muhammad Bin Salman,” Sheikh said.

He noted that the relationship between the two countries reached strategic level, and understanding between the two leaderships is very deep, and that would be instrumental in tapping the potential of the hard working and law-abiding Indians in future development process in the Kingdom. “During my tenure, I took the lead in materializing several exchanges of bilateral visits of Saudi and Indian business delegations as well as to boost commercial interactions, and this also played a role in India becoming the second largest trading partner of Saudi Arabia. I was always very much impressed by the Indian community, thanks to their sheer hard work, law-abiding nature, entrepreneurial skills, and mentality to help each other especially in remote outstations like Najran and Tabuk where the consulate cannot physically reach out to extend instant services,” he said.

Sheikh thanked Ambassador Dr. Ausaf Sayeed and his predecessors, Ahmad Javed and Hamid Ali Rao, for their critical support during his tenure as consul general and Hajj consul. He also mentioned the role he played in the resolution of several community related issues, especially the Saudi Oger issue involving 2,500 Indian workers and during Nitaqat amnesty period. “Such issues were resolved in a very professional manner and that was with good coordination with the Saudi authorities, employers, workers and community organizations. We kept a close watch on labor camps so as to ensure welfare of workers,” he said.

Sheikh said he was able to propagate and popularize Yoga as part of Indian culture and it has gained huge acceptance among Saudis as well. The consul general said that most of the local approvals are in place for the construction of the own premises of the consulate general. “When the situation improves, the project will be implemented on an area covering 10,000 sq. meters at a prime location behind Makkah governorate headquarters in the heart of the city,” he said while hoping that his successor, Dr. Sadre Alam, would take forward in further strengthening the ‘24/7 connect’ with the community and further cementing the relations with the Saudi government and people.

Sheikh identified the flawless and mammoth operation of Hajj with bringing in qualitative leap in facilities and services as the most remarkable achievement made during his tenure. “In 2008, I came to perform Hajj as an ordinary pilgrim four years before assuming charge as Hajj consul, and that experience gave me a clear overall picture of the facilities and services for pilgrims beforehand. Every year, we were able to make improvements after minutely observing the loopholes and shortcomings in the government of India’s largest annual operation outside its borders,” he said citing the example of including data of domestic pilgrims in mobile app after 2015 stampede in Mina.

Several landmark reforms were introduced in India’s Haj operation during Sheikh’s tenure, and these included Indian Hajj Information System App; Indian Hajj Accommodation Locator, e-MASIHA System; Baggage Tagging and Remote Check-in System; and Online Complaint Management System as well as using various social media outlets and WhatsApp. He specially thanked Minister of Hajj and Umrah Mohammed Saleh Benten for his dynamic leadership in streamlining the entire Hajj operation. “The techy savvy Benten is a lovely person with full of knowledge about each and every detail of the Hajj operation and high-tech services. Whenever we wanted to introduce something, he was the person who pushed for it.” “We have had an incredible partnership with the ministry and we helped each other in the entire processes. When the e-Hajj visa was introduced for the first time in 2017, India was one of the three countries to implement it the same year itself with issuance of 100 percent online visas.”

Sheikh said there were innumerable improvements and systematic changes for the betterment of Hajj services. Last year, 85,000 pilgrims took advantage of the complaint lodging online service and 2,290 women came to perform Hajj without accompanying a mahram (blood relative). He also hailed the selfless and dedicated service of more than 5,000 volunteers. “Without the volunteers, the great success of Hajj might not be possible. We have made the remote checking mechanism flawless well before this year’s Hajj season after experiencing some issues during the departure phase of last Hajj, in addition to further improving the system of pre-allotment of buildings that was introduced in Madinah in 2019.”

The Indian Pilgrims’ Welfare Forum (IPWF) organized on Thursday a farewell function in honor of Sheikh at the consulate conference hall. During the occasion, IPWF President Mohammed Ayoob Hakeem and former president Mohammed Aziz Kidwai presented Sheikh a replica of the Grand Mosque.

The consul general also held interactive session with the local media persons in which several community issues were discussed. He thanked the media community for the unflinching support offered to him. Jeddah Indian Media Forum President Jaleel Kannamangalam and General Secretary Sadiqali Thuvvur presented him a memento on the occasion.

Consul General Sheikh said that he is leaving the Kingdom after exerting great efforts in further bolstering centuries-old historic ties between India and Saudi Arabia. “I am deeply gratified and honored to be playing a leading role in hosting the first ever historic interaction with eminent Saudis of Indian origin titled “Muziris to Makkah” at the consulate premises last year,” he said while thanking Goodwill Global Initiative (GGI) for organizing such a great event. He urged the Indian community to tap the huge potential of the strategic bilateral ties for the benefit of the people of both the countries while looking forward to a golden era in historic ties.

He made the remarks during a farewell meeting with GGI delegation at the consulate. GGI President Dr. Ismail Maritheri and General Secretary Hassan Cheruppa presented him a memento during the function in which Treasurer Hassan Siddeeque Babu, Vice President A.M. Abdullakutty, Secretary Kabeer Kondotty and Media Cell Convener Ebrahim Shamnad were present.

These were the details of the news Haji was the center of my 8-year tenure, says outgoing Indian CG for this day. We hope that we have succeeded by giving you the full details and information. To follow all our news, you can subscribe to the alerts system or to one of our different systems to provide you with all that is new.