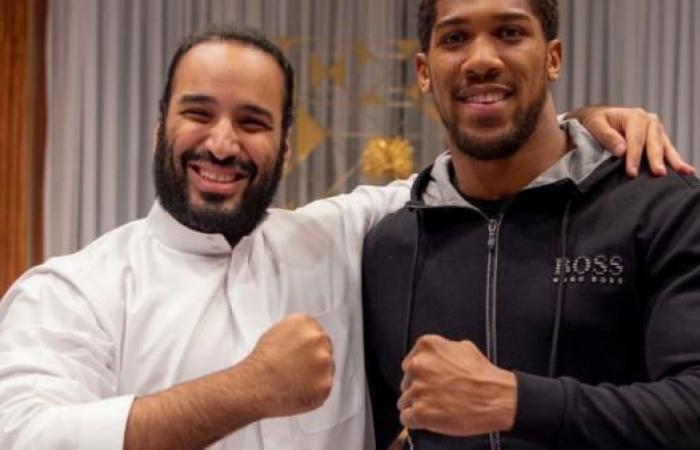 Aden - Yasmine El Tohamy - British boxer Anthony Joshua is under fire for posing for a selfie with Saudi Crown Prince Mohammed bin Salman, the kingdom's de-facto ruler who is behind a massive crackdown on human rights' campaigners.

MbS and Joshua posed for a photo together following the British boxer's bout in Riyadh, against Andy Ruiz Jr. in a highly controversial match dubbed "sports washing" by activists.

Both are seeing smiling warmly at the camera and clenching their firsts in a "fighting pose".

Joshua reportedly picked up as much as £59million ($79 million) for the bout in Riyadh, where MbS has launched a wave of entertainment and sporting events to help promote Saudi Arabia's image across the world after MbS was linked to the murder of journalist Jamal Khashoggi.

Although Joshua faced criticism for agreeing to the fight in Saudi Arabia but his selfie with MbS led to a further outcry.

"Congratulations Joshua .. You suppose to Tell #MBS to stop the war in #Yemen," commented one person on Twitter.

MbS has not only clamped down on human rights activists but was also the architect of Saudi-UAE intervention in Yemen, which has led to one of the world's worst humanitarian crises.

Joshua defended his decision to fight in Riyadh and the selfie with MbS.

"Anthony is an athlete and not a politician. The Crown Prince is a head of state and has been photographed with everyone from Boris Johnson, Mark Zuckerberg, Bill Gates to Barack Obama and The Rock," a spokesperson for Joshua said.

"Anthony has been shown a pathway to take the sport in a direction where it can influence great change in the Kingdom of Saudi Arabia and hopes his presence there will continue to shine a positive light and create further conversation around the region.

"He in no way condones any abuse on human rights anywhere in the world."

These were the details of the news Anthony Joshua under flak for MbS selfie for this day. We hope that we have succeeded by giving you the full details and information. To follow all our news, you can subscribe to the alerts system or to one of our different systems to provide you with all that is new.