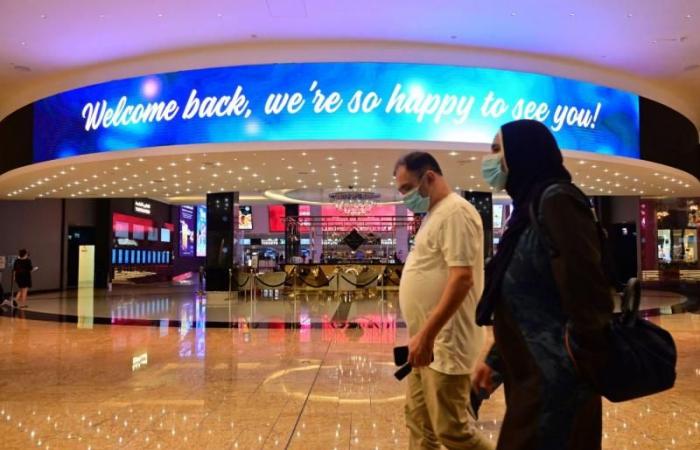 We show you our most important and recent visitors news details Life gradually returns to normal in Saudi Arabia, UAE in the following article

A man and a woman walk at a Dubai shopping centre after the Emirati authorities eased some of the restrictions put in place to stem the spread of the coronavirus. (AFP)

RIYADH - Life is gradually returning to normal in Saudi Arabia and the United Arab Emirates after months of lockdown restrictions to curb the coronavirus, reviving economies that have been hard hit by the decline in oil prices.

Saudi Arabia, which has the most COVID-19 infections in the Gulf, announced a set of measures to help ease and eventually lift its lockdown measures.

Restrictions will be lifted in phases, with the national curfew to officially end on June 21, except for in the holy city of Mecca, the state news agency reported.

Saudi Arabia’s interior minister announced a “two-phase normalisation plan" Thursday. The first phase will begin on May 31, after which entering and exiting Mecca will be allowed from between 6am and 3pm. Saudi airlines will operate some domestic flights starting Sunday. Government sector workplace attendance, suspended since March 16, will gradually resume starting May 31, while private sector employees will return to their offices on May 31.

However, the hajj and umrah pilgrimages, which attract millions of travelers from around the world, will remain suspended until further notice.

Friday prayers and other congregational prayers at the Grand Mosque (Masjid al-Haram) will continue in line with existing health measures, the Interior Ministry said in a statement on its official Twitter page.

Umrah visits have been halted since March 2 and visits for Masjid al-Nabawi and Kaaba at the Masjid al-Haram have also been off limits to visitors since March 20.

But on Sunday, the first day of Eid, prayers went ahead at the mosque. There an imam stood on a podium while Saudi security forces, some wearing masks, positioned themselves between rows of worshippers, their prayer mats placed in well-spaced arcs.

The second phase of relaxed restrictions will start on June 21, after which citizens will be allowed outside between 6am to 8pm, according to the interior minister. Barber shops and hairdressers will still not be allowed to open, while weddings and funerals will be limited to 50 people, Saudi Minister of Human Resources Ahmed al-Rajhi said in a statement.

The Health Ministry said all citizens bear responsibility for helping prevent the spread of the virus by observing social distancing measures.

The UAE, meanwhile, announced that business activities would gradually resume as the country eases lockdown measures. Dubai removed restrictions on movement and business operations between 6:00am and 11:00pm.

It allowed cinemas, gyms and some entertainment attractions to reopen after permitting malls and dine-in restaurants to open last month. Workplace attendance in Dubai is now permitted at 50%.

UAE capital Abu Dhabi has so far maintained a nationwide curfew from 8:00pm to 6:00am, but allowed malls and dine-in restaurants to operate at limited capacity.

It remains to be seen whether other Gulf states with COVID-19 restrictions will follow suit.  Qatar, which has the second highest infection count in the region, has halted all commercial activities from May 19 to May 30.

Kuwait imposed a 24-hour curfew on May 10, but said it would return to a partial curfew at the end of May. Oman, meanwhile, opted to lift its lockdown on the capital Muscat entirely from May 29, the state’s national news agency said.

The number of coronavirus cases in the six Gulf Arab states doubled in less than a month, surpassing 200,000 on Wednesday, according to a Reuters tally.

The rise in infections was initially linked to travel but then spread among migrant workers in overcrowded quarters, prompting authorities to increase testing.

These were the details of the news Life gradually returns to normal in Saudi Arabia, UAE for this day. We hope that we have succeeded by giving you the full details and information. To follow all our news, you can subscribe to the alerts system or to one of our different systems to provide you with all that is new.