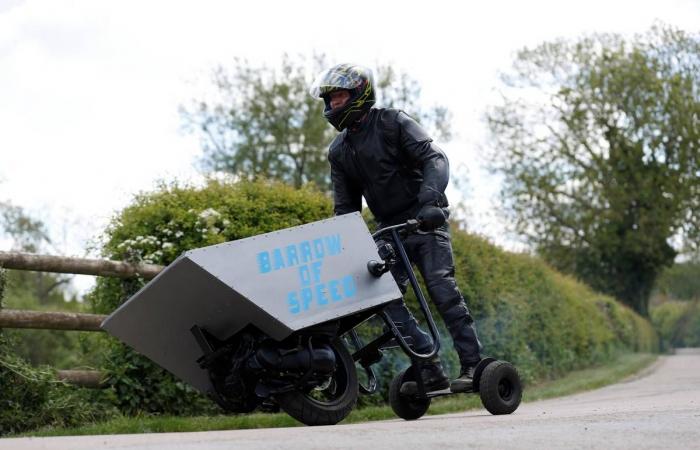 Thank you for reading the news about Coronavirus: Motorised British wheelbarrow aims to set world speed record and now with the details

Aden - Yasmine El Tohamy - Kevin Nicks hopes to achieve the feat on the "Barrow of Speed", which he built with zero budget, once the pandemic has passed.

The creator of the world's fastest shed has turned his hand to another niche mode of transport: a motorised wheelbarrow built on a zero budget during the coronavirus lockdown in Britain.

Kevin Nicks, a 57-year-old former gardener from Oxfordshire, said he was aiming to set a Guinness world speed record on the "Barrow of Speed" once the pandemic had passed.

More immediately, however, he said the wheelbarrow showed what was possible with limited access to materials, a positive attitude and some creativity.

"I set myself a challenge to build a machine on zero budget because for some people money is tight," he said.

"Somebody donated a moped which wasn't running and I got that running. Everything else was just scraps and bits and pieces I had around.

"Now I have built this amazing machine which has actually turned out far better than I thought - it is such fun."

Nicks, who rides the barrow standing on a rear platform, said he would contact Guinness World Records about an attempt to set a speed record when the pandemic was over, most likely at Elvington airfield in Yorkshire, north England.

"It'll be quite fun seeing that go down the runway doing around 40 miles (65 km) an hour," he said. "And believe me, standing up, 40 miles an hour is pretty fast enough."

Nicks built the world's fastest shed in 2015 and three years later it reached 101.5 mph at Pendine Sands in Wales.

These were the details of the news Coronavirus: Motorised British wheelbarrow aims to set world speed record for this day. We hope that we have succeeded by giving you the full details and information. To follow all our news, you can subscribe to the alerts system or to one of our different systems to provide you with all that is new.