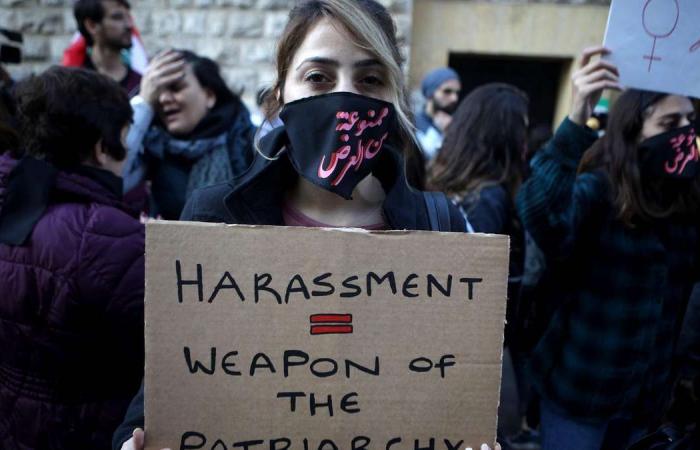 Hind Al Soulia - Riyadh - Scores of women marched through the streets of Beirut on Saturday to protest sexual harassment and bullying and demanding rights, including the passing of citizenship to children of Lebanese women married to foreigners.

The march started outside the American University of Beirut, west of the capital, and ended in a downtown square that has been witnessing daily protests for more than seven weeks.

Nationwide demonstrations in Lebanon broke out October 17 against proposed taxes on WhatsApp calls turned into a condemnation of the country’s political elite, who have run the country since the 1975-90 civil war. The government resigned in late October, meeting a key demand of the protesters.

“We want to send a message against sexual harassment. They say that the revolution is a woman, therefore, if there is a revolution, women must be part of it,” said protester Berna Dao. “Women are being raped, their right is being usurped, and they are not able to pass their citizenship.”

Activists have been campaigning for years so that parliament drafts a law that allows Lebanese women married to foreigners pass their citizenship to their husbands and children.

Earlier this year, Raya Al Hassan became the first woman in the Arab world to take the post of interior minister. The outgoing Cabinet has four women ministers, the highest in the country in decades.

Lebanon is passing through a crippling economic and financial crisis that has worsened since the protests began.

During the women’s protest in Riad Solh Square, a man set himself on fire before people nearby extinguished the flames. His motivation was not immediately clear and an ambulance came shortly afterward and evacuated him.

Also on Saturday, outgoing Prime Minister Saad Hariri appealed to more countries to help Lebanon in its crisis to import essential goods. The request made in a letter to the leaders of Germany, Spain and Britain, came a day after Hariri sent similar letters to other countries including Saudi Arabia, US, Russia and China.

These were the details of the news Lebanon's women march against harassment in Beirut for this day. We hope that we have succeeded by giving you the full details and information. To follow all our news, you can subscribe to the alerts system or to one of our different systems to provide you with all that is new.

PREV Putin warns of ‘lethal’ strikes at Russian warship parade
NEXT Clubhouse says no data breach after reports of 3.8bn phone numbers of users being sold