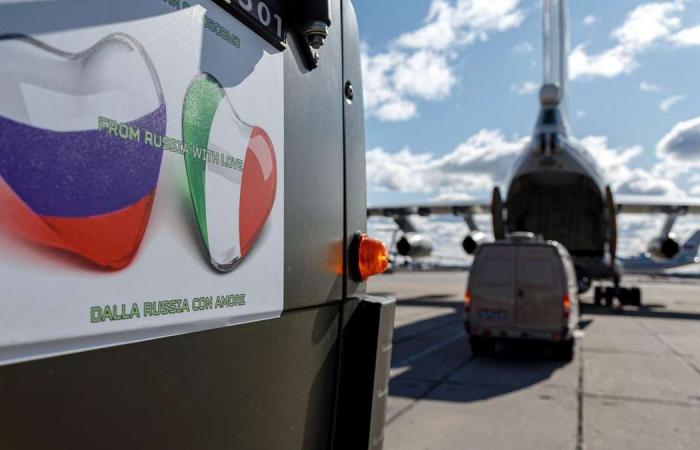 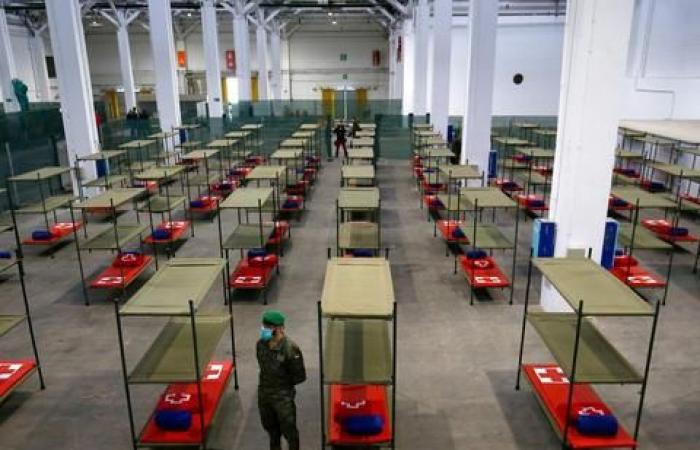 Hind Al Soulia - Riyadh - Much of the Russian aid that has arrived in Italy to combat the spread of coronavirus is of little use, say senior politicians in Rome.

Military vehicles with Russian flags carried the aid on its 600-kilometre journey from an Italian airbase south of Rome to Lombardy, the region worst affected in the world by Covid-19.

Footage of the convoy was shared on social media along with images of Russian military doctors dressed in fatigues poring over maps with Italian colleagues.

But the expedition has been interpreted in the Italian media as a public relations stunt.

Senior political sources told the Italian newspaper La Stampa that 80 per cent of the Russian equipment was of little use to Italy.

The aid, emblazoned with stickers stating “From Russia with love”, has been compared unfavourably with that arriving from China.

Beijing sent much-needed masks and ventilators along with doctors who had battled the coronavirus in Wuhan.

Russia seems to have mostly sent supplies for countering chemical or biological warfare, including a field laboratory for chemical-bacterial sterilisation.

The Russian experts who accompanied the aid are specialists in biological and chemical weapons, led by Gen Serget Kikot, the mission’s head and an authority on anthrax.

In all, nine IL-76 transport aircraft carrying the aid landed in Italy as part of a deal between Italian Prime Minister Giuseppe Conte and Russian President Vladimir Putin on March 21.

The arrangements were finalised by the Italian and Russian defence ministers.

Russia’s ambassador to Italy, Sergei Razov, was scathing of the criticism.

“Such assertions are the product of a perverse mind,” Mr Razov said. “A selfless desire to help a friendly people in trouble is seen as insidious.”Francesco Galietti, chief executive of the political risk consultancy Policy Sonar in Rome, told The National that there was nothing surprising about Russia’s decision to help Italy.

Mr Galietti said Moscow was simply countering China’s moves in a country where it has had influence since for decades.

“Russia is just defending its home turf,” he said. “Russia is competing against China on this.

“This whole crisis is exposing trends that have been under way for far too long.

A year ago, long before the global crisis posed by the coronavirus, Italy became the first G7 nation to join China’s Silk Road project, signing deals worth €2.5 billion (Dh10.14bn) with Beijing.

Now, as Italy has overtaken China as the nation worst hit by the coronavirus, Chinese specialist doctors and medical equipment have arrived ready to help.

The doctors bring with them first-hand experience of dealing with the Covid-19, having worked on the original outbreak in China’s Hubei province, which killed more than 3,000 people.

Huawei, the telecom giant, is among several Chinese companies that have donated supplies, such as masks and other protective equipment, to countries in Europe.

Even before the pandemic, Huawei was on a charm offensive, lobbying European nations to allow its involvement in the roll-out of 5G networks.

As the EU struggles to mount a coherent response to the rampant spread of coronavirus and the US looks to blame other nations for its own outbreak, China appears to be making significant soft-power progress.

These were the details of the news Italy says it can't use some of Russia's coronavirus aid for this day. We hope that we have succeeded by giving you the full details and information. To follow all our news, you can subscribe to the alerts system or to one of our different systems to provide you with all that is new.