Philippines, US on track to deepen alliance as Marcos concludes American trip 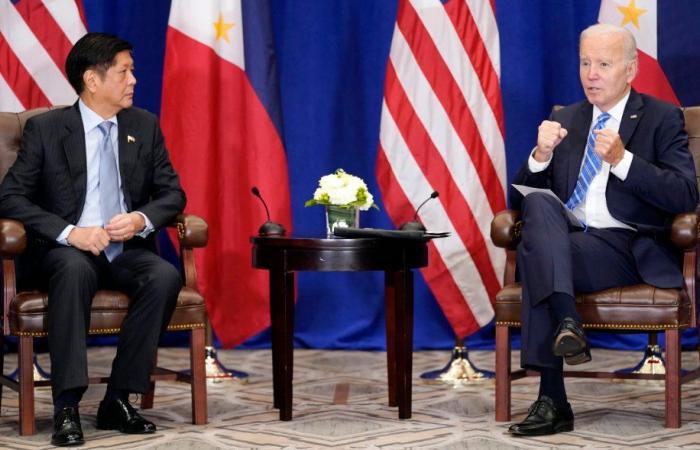 Thank you for reading the news about Philippines, US on track to deepen alliance as Marcos concludes American trip and now with the details

Jeddah - Yasmine El Tohamy - MANILA: The Philippines is on track to deepen its alliance with the US, experts said this week, as the first meeting between President Ferdinand Marcos Jr. and his US counterpart Joe Biden showed mutual intention to revive long-standing ties that were undermined during the previous Philippine presidency.

Marcos and Biden held their inaugural face-to-face talks on the sidelines of the UN General Assembly in New York City, a few months after the son of the late dictator took office following a landslide victory in the Philippine elections.

Since becoming president, Marcos has held meetings with a number of top US officials, including US Secretary of State Antony Blinken, in a foreign policy shift from the days of former president Rodrigo Duterte, who oversaw a strategy to distance Manila from Washington and embrace a Beijing-friendly direction.

Marcos, who is set to return to the Philippines on Saturday, said that he cannot envision his country without the US as a partner during an economic forum earlier in the week.

Biden had reaffirmed the US’ “ironclad commitment” to the defense of the Philippines during the occasion, the White House said in a statement, as they discussed various other issues, including tensions in the South China Sea and the Russian invasion of Ukraine.

“The relationship between the US and the Philippines, to state the obvious, has very deep roots. We’ve had some rocky times but the fact is it’s a critical, critical relationship from our perspective,” Biden said.

Their meeting conveyed eagerness on both sides to strengthen ties, Southeast Asia expert Gregory Poling of the Center for Strategic and International Studies in Washington D.C., told Arab News.

“The meeting certainly shows both sides are eager to deepen the relationship, and that doing so is a high priority for the Biden administration,” Poling said.

As the White House “doesn’t organize a ton of meetings like this” on the sidelines of the UN General Assembly, Poling said that “prioritizing this one sends its own message.

“The US-Philippines alliance is undergoing a process of modernization that started last year and is moving rather quickly,” he added.

Victor Andres Manhit, president of the Stratbase ADR Institute for Strategic and International Studies in Manila, said the meeting showed how Manila is “strengthening and believes” in its partnership with Washington.

“Hopefully, this could be a fresh start in how to strengthen this alliance and turn this alliance beyond defense and security but really a consistent support from the US with regard to trade, investments that can generate jobs, that can then generate more growth for the Philippines,” Manhit told Arab News.

He added that strong relations between the two countries have “always been what the Filipinos want.”

Marcos said that the Philippines will be “a friend to all, and an enemy to none” during his first address to the nation in July, with his administration’s approach toward the US showing a marked contrast to his predecessor, who went to China in the early days of his presidency and announced a “separation” from Washington, its former colonial master.

These were the details of the news Philippines, US on track to deepen alliance as Marcos concludes American trip for this day. We hope that we have succeeded by giving you the full details and information. To follow all our news, you can subscribe to the alerts system or to one of our different systems to provide you with all that is new.