Scenes from the operation to save the child Ryan..the most dangerous... 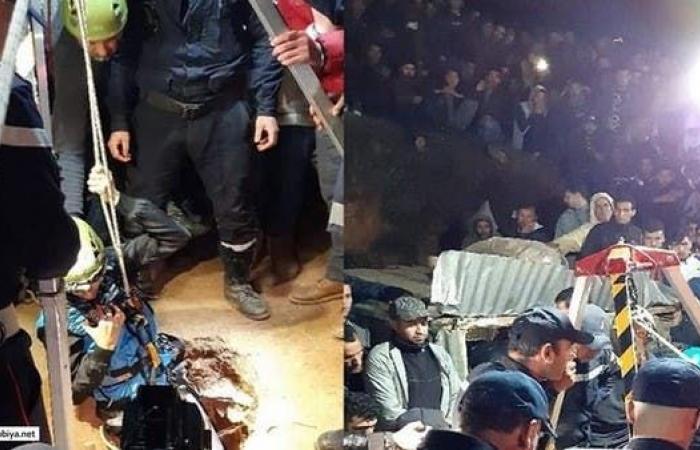 A local official in Chefchaouen expected to reach the child Rayan within two hours, despite “the rock that constitutes an obstacle and surrounds the Moroccan child.” According to our reporter.

In a reassuring context, rescue teams in Morocco were able to drop food and drink into the well after the child Rayan was stuck inside it in the village of “Tamurt”.

Al-Arabiya/Al-Hadath sources confirmed today, Thursday, that attempts to rescue him have continued for more than 50 hours.

Al-Arabiya/Al-Hadath correspondent reported earlier that he was still breathing, explaining that only 8 meters separated him from freedom.

He also added that 6 bulldozers were working in the area trying to make a breach on both sides of the well, as drilling reached 22 meters out of a total of 30 meters, which is the depth of the well.

The information added that it is now related to what the locals know as “Sunda”, which is a deep hole in the well, but very narrow, with a diameter of 30 centimeters, while the circumference of the drilling has been expanded to become a semi-circular shape around the well.

For its part, the Moroccan government has expressed its concern about a tragedy due to the possibility of landslide.

She called on citizens not to gather around the well to facilitate its rescue, noting that the nature of the soil complicates the rescue process.

It is noteworthy that a medical helicopter is in the village of “Tamurt”, where the child is, in order to transport him to the hospital if he is rescued, along with a medical ambulance equipped with all resuscitation equipment, and a health team that includes a specialist doctor for resuscitation and anesthesia and nurses.

It is noteworthy that the five-year-old fell into a deep well in the Tamrout community in the northern Chefchaouen province, the depth of which was estimated to be more than 30 meters.

These were the details of the news Scenes from the operation to save the child Ryan..the most dangerous... for this day. We hope that we have succeeded by giving you the full details and information. To follow all our news, you can subscribe to the alerts system or to one of our different systems to provide you with all that is new.