“Al-Houthi” .. successive defeats made it lose its mind 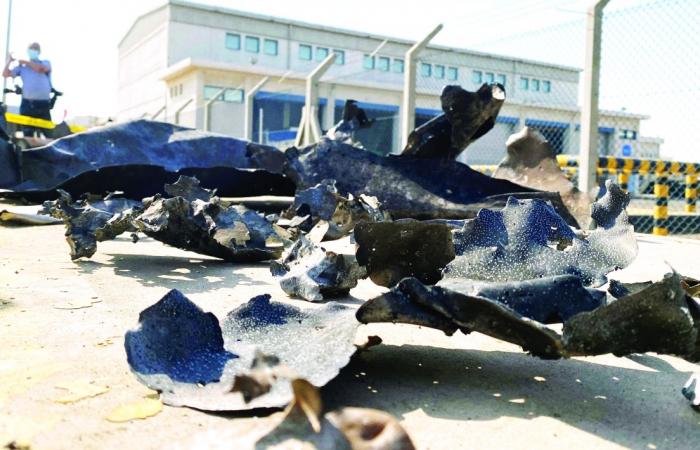 Huge losses and successive defeats, even in its stronghold of Saada, the Houthi militia lost its mind, and it headed for escalation. Yesterday, the Arab Coalition to Support Legitimacy in Yemen announced the interception and destruction of a number of drones that were launched towards the Kingdom of Saudi Arabia. The Southern Giants Brigades took control of militia missiles in the Harib District, south of Ma’rib Governorate, in which the army made new progress, as in Shabwa and Al-Jawf.

The coalition confirmed, “the interception and destruction of a total of 8 drones, which were launched towards the Kingdom,” adding: “We are following the threat of hostile attacks using drones in the air,” noting that the coalition “monitored and is following up on a hostile escalation using drones by the Houthis.”

The coalition stated that “a number of booby-trapped rallies were launched from Sana’a International Airport.” With regard to military developments in Marib, the coalition said: “We have carried out 39 targeting operations against the militia in Marib during the past 24 hours.” The coalition also confirmed that its operations in Marib resulted in the destruction of 21 military vehicles, and inflicted human losses on the Houthis, exceeding 230 terrorists.

The battle of Marib

A military statement to the Giants Brigades confirmed that they had confiscated more than 20 Houthi missiles at a location in the Harib district, which the militias had prepared to launch as part of their hostile operations against civilians and the Giants forces in Shabwa governorate.

The Media Center of the Armed Forces stated that the army forces, backed by the popular resistance, regained yesterday new strategic military sites in the Khub Al-Sha`af district, north of Al-Jawf Governorate, amid ongoing battles. The commander of the northern axis, Brigadier General Hadi Hamran Al-Jaidi, said that the army forces were able to recover strategic military sites, most notably the desert, the sites of “mours” and the mountains of “Amput”.

The area of ​​defeats inflicted on the militia expanded from Shabwa governorate to the governorates of Saada and Al-Jawf, with the introduction of new combat units from the government forces and the Houthis’ pursuit of tribal dignitaries in search of more recruits to compensate for the bleeding of the fronts. With the brigades of the Giants closing in on the remnants of the militia members in the center of the Harib district, units of the Happy Yemen Brigades invaded the Houthi sites in the south of the city of Ma’rib and reached the outskirts of Umm Al-Rish camp and Aqaba Malla overlooking the Harib district from the northern side, and the militia pockets were isolated on the outskirts of the Balk mountain range. Eastern.

Meanwhile, units from the northern axis in the Sixth Military Region carried out a qualitative operation between the governorates of Saada and Al-Jawf, during which they took control of military sites that the militia had controlled at the end of last year.

These were the details of the news “Al-Houthi” .. successive defeats made it lose its mind for this day. We hope that we have succeeded by giving you the full details and information. To follow all our news, you can subscribe to the alerts system or to one of our different systems to provide you with all that is new.