Raising the subsidy is a fait accompli…and the fuel by the... 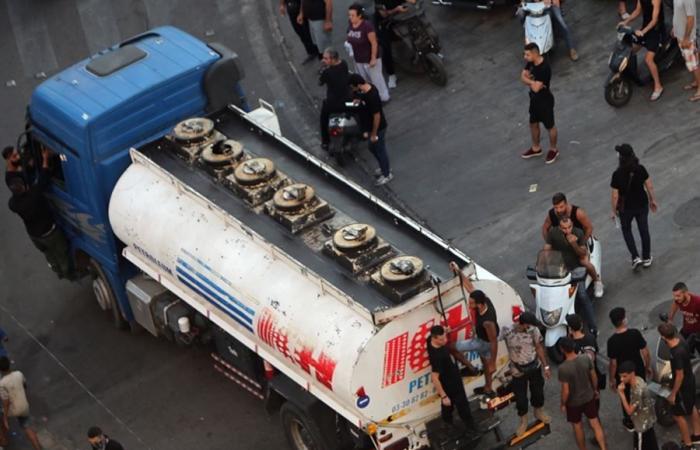 Elie Ferzli
Unsubsidized diesel ships routinely arrive in Beirut, where they allocate their cargo to some factories paid in dollars. This will inevitably lead to a reduction in the subsidized diesel market, in preparation for its abolition within weeks. In parallel, the black market has turned into the first tributary of gasoline, in light of the rationing of distribution, and the fact that the Banque du Liban did not open credits except by dropper. Faced with this reality, Iranian diesel fuel will not be delayed before it becomes part of the scene. 29 million liters will start arriving in Lebanon within days, after Hezbollah has completed all arrangements related to storage, distribution, and the beneficiaries

When it was decided to open a credit in the budget reserve to cover the value of the difference between the price of the dollar on an exchange platform and its price in the fuel price installation schedule, which is set at 8000 pounds, the support was supposed to continue until the end of September or until the amount allocated for the support runs out, i.e., 225 million dollars. It was also assumed that the financing card had been released, allowing to compensate for some of the support that will be raised.
Two weeks have passed since the decision to reduce support, and a week has passed since the date that was scheduled to launch the electronic platform for the card, without anything new. The platform has not been launched, and it does not appear that the support will continue until the end of September. Basically, the subsidy cuts did not end the queuing crisis. On the contrary, what happened is that the crisis has become more tragic, and the queues no longer differentiate between an open station and a closed station. In addition, no one can predict when the card will start benefiting from or even announce the start of registration, in light of unresolved disputes regarding the entity that holds the data and the entity that runs the platform.
According to the information, about 160 million liters of fuel (diesel and gasoline) are still available in the market, which is enough for about ten days. This means, in practice, that the stage of severe scarcity has begun, while the Banque du Liban refuses to open credits for ships currently anchored off the Lebanese coast. Was all the amount approved? Concerned sources indicate that about 125 million dollars have already been used, while it was decided that 25 million dollars will be allocated for the needs of Electricity of Lebanon. As for the $75 million, there is a decision to extend the period of benefit from it, which means that the support will be nominal, as long as it does not suffice the market need.
Moreover, it was reported that the General Directorate of Oil in the Ministry of Energy asked the bank not to open credits until after its approval, in an effort to reduce storage and consumption of available quantities. But that will automatically be coupled with more market throttling and a further rise in the black market price.
And if this black market is still active for gasoline, diesel is gradually starting to be freed from the official price, as a proportion of the demands are being met with cash dollars. After the adoption of the sale in cash dollars, about a year ago, to the United Nations forces and to ships that need to be resupplied, the process of importing diesel for industrialists has finally begun to activate, after it was allowed to import without prior permission, noting that last week, Medco Company was unloaded. A diesel steamer paid for it in cash dollars (from outside the Central Bank of Lebanon mechanism), at a price of $540 per ton (5 percent of the importer’s profit), to be sold to industrial facilities that reserved their share, and paid for it through a money transfer company. It is expected that the unsubsidized diesel trade will expand with time, leading to the end of the subsidy automatically, especially since those who cannot buy subsidized diesel will have to buy it from the black market at more than 300 thousand pounds per can, while the price of the plate, if it is imported without Support, approximately 200 thousand pounds. And in order to establish the legitimacy of importing from outside the mechanism of the Banque du Liban, sources in the sector confirm that the Ministry of Energy will issue an official price for those wishing to buy diesel in cash.
In addition, the issue of importing diesel fuel from Iran is still interacting, amid ambiguity regarding the date of the shipment’s entry into Lebanon. However, the information indicates that the first batch will be on the market very soon. The shipment, estimated at 29 million liters of diesel, will be distributed through Al-Amanah Company, in two phases. The first includes distributing diesel to hospitals, private and public clinics, and some factories that manufacture basic products, and the second includes municipalities and private generators.
It was decided that the shipment would be sold at the official price, i.e. subsidized at the price of 8000 pounds to the dollar, while a large part of it would be distributed free of charge to vital facilities, bearing in mind that the distribution plan includes the delivery of quantities to villages with a height of more than 800 meters, while subsequent shipments are supposed to be allocated for sale on Stations Al Amana rented or purchased in the regions.
According to the information, the diesel will be transported from Syria through a fleet of tanks provided by the Syrian leadership free of charge, with the use of storage capacities available in more than one area, in addition to the adoption of the Iranian ship anchored in Baniyas as a warehouse, so that its cargo is not unloaded at once, but rather within days.

These were the details of the news Raising the subsidy is a fait accompli…and the fuel by the... for this day. We hope that we have succeeded by giving you the full details and information. To follow all our news, you can subscribe to the alerts system or to one of our different systems to provide you with all that is new.