The trial of Salah Abdeslam, the most prominent suspect in the... 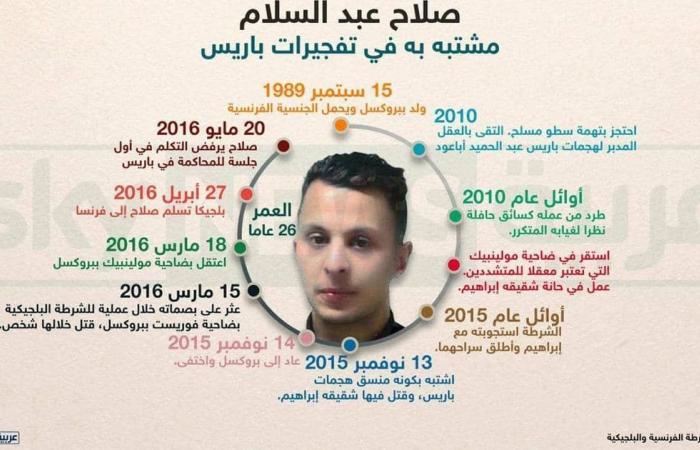 The 20 defendants will be tried for what has become known as the worst A terrorist attack In the history of France, which killed 130 people, in addition to 9 militants, including Salah’s brother, Ibrahim Abdel Salam, who blew himself up in a Paris bar.

But those who hope to tell, the tenth man in Paris attacksEverything about what prompted him to be a part of the horrific attacks risked disappointment.

Since his arrest after an intense chase that lasted 4 months and ended with an exchange of fire with the police in Belgium, stick Salah Abdel Salam Almost complete silence about his role in the bloodshed.

Like Ibrahim, Salah was equipped with an explosive belt, but he did not detonate it and was found in a garbage can in southern Paris several days after the bloody attacks.

and Salah Abdeslam, a 31-year-old who holds French nationality Although raised in Belgium, he is accused of playing a key logistical role in the attacks, having led the three suicide bombers who blew themselves up outside the Stade de France to their destination.

Abdeslam also rented cars and hideouts and drove across Europe in the months leading up to the attacks to collect terrorist militants who had infiltrated the continent unnoticed among crowds of migrants.

He told police shortly after his arrest that he, too, was ready to carry out a suicide attack at the Stade de France, one of the six locations where the Paris attacks were targeted, but backed out at the last minute.

Investigators questioned that claim, saying they believed he was intent on pursuing his mission, but was hampered by a defective explosive belt.

Regardless of the outcome of the trial, Salah Abdeslam is likely to spend many years behind bars, just 3 years after being sentenced to 20 years in prison for attempted murder in a shootout with Belgian police.

Abdel Salam, who is of Moroccan origin, did not mention during his trial any justification for his action before the court. On the first day of the sessions, he challenged the judiciary, stressing, “I am not afraid of you, and I am not afraid of your allies or your partners, because I have relied on God. This is all I have, and there is nothing to add.”

The prosecution demanded a 20-year prison sentence, with a guarantee that no release would be made before the expiration of two-thirds of the sentence against those accused of “attempting to assassinate several policemen in a terrorist framework.”

Salah Abdeslam, the only surviving member of the militant group, justified the November 13, 2015 attacks in Paris, during his seventh appearance before an anti-war judge. Terror, according to RTL radio.

Salah confirmed his desire not to hire a lawyer and that he delegates his affairs to God, according to the radio.

Abdul Salam said: “We did not attack you because you eat pork, drink wine and listen to music, but rather because Muslims defend themselves if they are attacked.”

Addressing the victims and their families, he continued: “Put your anger aside and think for a moment, you are paying the price for the mistakes of your leaders.”

These were the details of the news The trial of Salah Abdeslam, the most prominent suspect in the... for this day. We hope that we have succeeded by giving you the full details and information. To follow all our news, you can subscribe to the alerts system or to one of our different systems to provide you with all that is new.