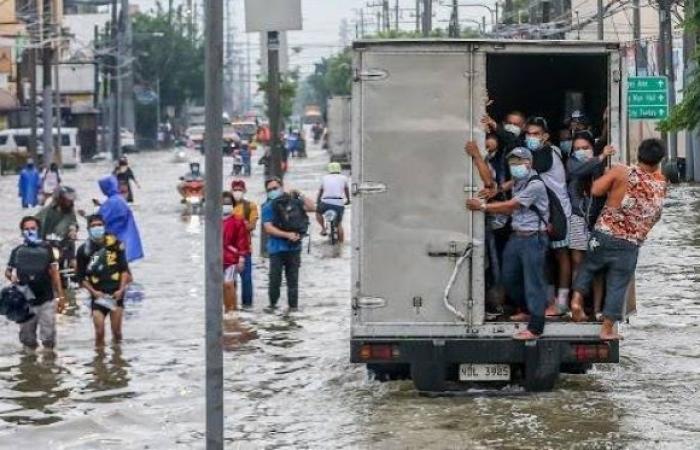 We show you our most important and recent visitors news details Philippines evacuates thousands as monsoon rains flood cities, provinces in the following article

Hind Al Soulia - Riyadh - MANILA — Authorities in the Philippines have evacuated more than 15,000 people in Metro Manila and some parts of the country as heavy monsoon rain, compounded by a tropical storm, flooded the city and nearby provinces.

"We ask residents of affected areas to remain alert and vigilant, take precautionary measures, and cooperate with their respective local authorities," presidential spokesperson Harry Roque said in a statement.

Meanwhile, the national disaster agency said that around 14,000 residents have been evacuated near the Marikina river in Metro Manila as the water rose to a dangerous level due to nonstop heavy monsoon rains.

The national disaster agency reported that authorities also evacuated nearly 1,800 residents in three towns in Rizal province, east of Manila, due to flood threats, adding that some residents in Mindoro province have also been evacuated.

The Philippines, a Southeast Asian archipelago of more than 7,600 islands, sees about 20 tropical storms a year but a warmer Pacific Ocean will make storms more powerful and bring heavier rain, meteorologists say.

In some parts of the Philippine capital region, an urban sprawl of more than 13 million people, floodwaters, in places waist-deep, cut off roads to light vehicles. — Agencies

These were the details of the news Philippines evacuates thousands as monsoon rains flood cities, provinces for this day. We hope that we have succeeded by giving you the full details and information. To follow all our news, you can subscribe to the alerts system or to one of our different systems to provide you with all that is new.