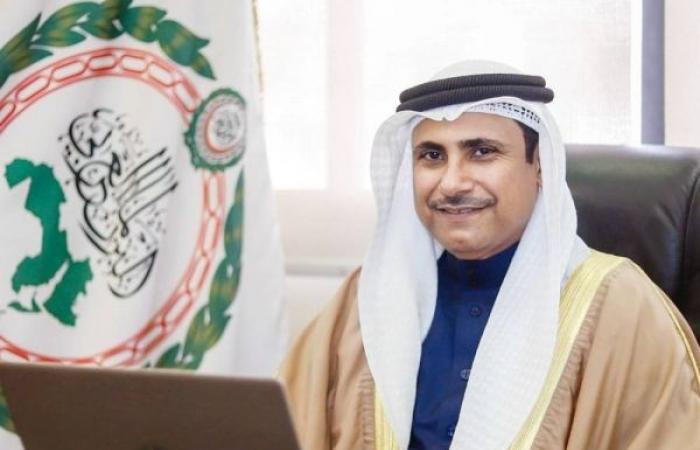 We show you our most important and recent visitors news details Al-Asoumi: Saudi efforts in Yemen affirm its key role in establishing security and stability in the following article

Hind Al Soulia - Riyadh - CAIRO — Arab Parliament Speaker Adel bin Abdurrahman Al-Asoumi commended the Kingdom of Saudi Arabia's efforts, under the leadership of the Custodian of the Two Holy Mosques King Salman and the Crown Prince, in Yemen aimed at reaching a political solution that ends the conflict.

The efforts would have ended the bloodshed and ensured regional peace and stability, the latest of which was the Kingdom’s initiative to end the conflict in Yemen, which was widely welcomed by the UN Security Council on Friday.

In a statement issued Saturday, Al-Asoumi welcomed the Security Council’s call for the Yemeni parties to engage in the implementation of the provisions of the Riyadh Agreement in order to reach a comprehensive settlement and a political solution that achieves security and stability in Yemen.

The statement pointed out that it is a step that is in line with the international community’s efforts to address regional issues and assume its responsibilities in preserving international stability.

Al-Asoumi affirmed that the Kingdom's commitment to supporting the legitimate government in Yemen and its people against the Iran-funded terrorist Houthi attacks reflects its keenness to achieve security and stability, to end the suffering of the Yemeni people, and to put Yemen's interests above the Iranian ambitions and destructive plans aimed at destabilizing security and stability in the region.

Moreover, Al-Asoumi lauded the Kingdom's recent initiatives, including the Gulf initiative and its support to all consultations to end the Yemeni crisis and reach a comprehensive political solution, as well as the Kingdom's role and efforts to support Yemen's security and stability through providing humanitarian assistance to the Yemeni people.

He stressed that these efforts reflect the Kingdom's good intentions and embody its pioneering role in ensuring the security and stability of the region.

The speaker of the Arab Parliament called on the international community to adopt and support the Saudi initiative to save Yemen and to end the human suffering of the Yemeni people, and to engage in the peace process based on the three references adopted by the GCC Initiative and the implementation mechanism, the outcomes of the Yemeni national dialogue and the Security Council Resolution no. 2216. — SPA

These were the details of the news Al-Asoumi: Saudi efforts in Yemen affirm its key role in establishing security and stability for this day. We hope that we have succeeded by giving you the full details and information. To follow all our news, you can subscribe to the alerts system or to one of our different systems to provide you with all that is new.