The UAE is the first in the world to skip the... 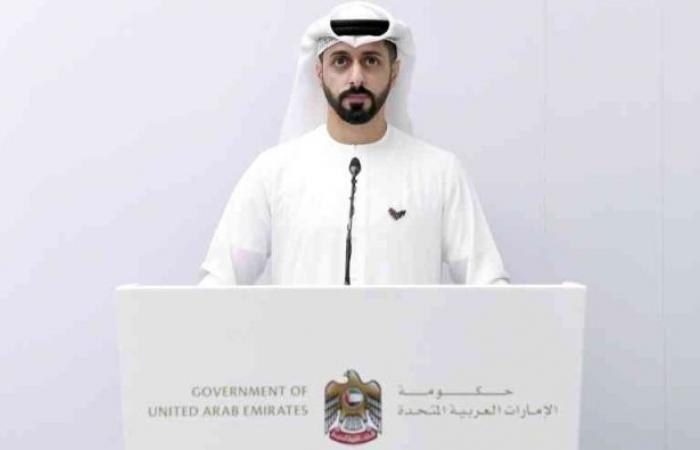 The UAE has become the first country in the world in which the number of laboratory tests that have been conducted to discover cases infected with the emerging “Corona” virus “Covid 19” exceeds the total number of population, for countries whose population exceeds one million, as the number of tests conducted by health institutions in the country exceeded Over 10 million checks.

This came during the media briefing that the UAE government holds periodically to address the latest developments in health conditions in the country and answer questions and inquiries that concern public opinion.

Dr. Omar Abdul Rahman Al Hammadi, the official spokesman for the media briefing of the UAE government, revealed a set of statistics and numbers that were monitored by the relevant agencies to analyze the health situation during the past week, between September 30 and October 6, 2020.

Al-Hammadi announced that during this period 720,802 examinations were conducted at the state level, an increase of 8% compared to the previous week, and the examinations revealed an increase of 16% in the confirmed cases, to reach the number of 7704 cases, and accordingly, the rate of positive cases out of the total tests remains at 1%, which is Similar rate to the previous week.

Al Hammadi stressed the UAE’s keenness to continue achieving its aspirations and achievements in various vital sectors, foremost of which is the education sector because of its special importance, indicating that the sector was able to achieve record achievements in a short period, thanks to the readiness of the infrastructure of educational institutions and the adoption of the latest technologies to ensure Continuity of the learning process with the imposition of strict precautionary standards and procedures that ensure the safety of students and workers in educational institutions.

During the briefing, Dr. Omar Al-Hammadi stressed that the volunteers who took the experimental vaccine for the emerging “Corona” virus must adhere to preventive measures such as wearing a muzzle and maintaining physical distancing, explaining that obtaining the experimental vaccine does not necessarily mean that there is no infection with the virus.

Al-Hammadi explained that if the volunteer receives the second dose of the vaccine, it needs 4 weeks to improve the level of his immunity and reach the levels required to deal with the virus, and even with the improvement of the volunteer’s immunity, the immunity provides protection only for him and not for those around him from his family members or colleagues, where it can be The volunteer is a reason for transmitting infection to them if he does not adhere to the preventive measures.

Al-Hammadi advised the volunteers and everyone to continue to follow the precautionary measures in order to preserve their health and the safety of others.

Dr. Omar Al-Hammadi answered a question about the importance of vaccinating seasonal influenza and the risk of infection with it and the disease “Covid 19” at the same time, especially with the approaching winter season, and explained that infection with “Covid 19” disease, and seasonal influenza at the same time poses a danger to the patient, especially with difficulty. Distinguish between viral colds, influenza and the emerging “Corona” virus, as they all share the same pathological symptoms such as high temperature, feeling pain in the body, feeling very tired, coughing and headache, considering that a laboratory examination is the best way to distinguish between them.

He added that it is the duty of everyone to help the health sector by taking the influenza vaccine available in health centers as it reduces the risk of infection and the chances of spread.

Al-Hammadi explained that the effect of influenza may be slight in some groups, but it may be dangerous for the elderly and people with chronic diseases, indicating that the flu is similar to the Corona virus in the ability to transmit from the infected person to others even with no symptoms appearing in the same way that is represented. Inhaling aerosols when coughing and sneezing, touching contaminated surfaces, and then touching the mouth, nose, or eyes.

He revealed that the prevention of influenza and the “Corona” virus is in the same way, which is wearing masks, physical distancing, sterilizing hands and not mixing with people with respiratory symptoms, indicating that the big difference lies in the existence of an effective, safe and approved vaccine against seasonal influenza, which helps stimulate the body’s immunity During a two-week period, he noted that some side effects may appear during this period.

Al-Hammadi stressed that the influenza vaccine does not protect against “Covid 19” disease, but it protects against the possibility of influenza infection that may lead to hospitalization or severe complications, and thus the person avoids unnecessary medical visits.

Al-Hammadi said: The importance of influenza vaccination is greatest among groups that may suffer from complications from influenza disease or can transmit it to others, including health sector workers, children under the age of five, smokers, pregnant women, the elderly over the age of 65, and those suffering from diseases such as diabetes. And heart, lung, liver, kidney and others. At the conclusion of the briefing, Al Hammadi stressed the need for everyone to play their role in protecting himself and his community, which would ensure the complementarity of governmental and societal roles and efforts.

These were the details of the news The UAE is the first in the world to skip the... for this day. We hope that we have succeeded by giving you the full details and information. To follow all our news, you can subscribe to the alerts system or to one of our different systems to provide you with all that is new.

PREV EU regulator not budging on vaccine dosage as states scramble for shots
NEXT Trump, returning to political stage, flirts with 2024 run