Is a ban on buying sex work effective? Sex workers say ‘no’ 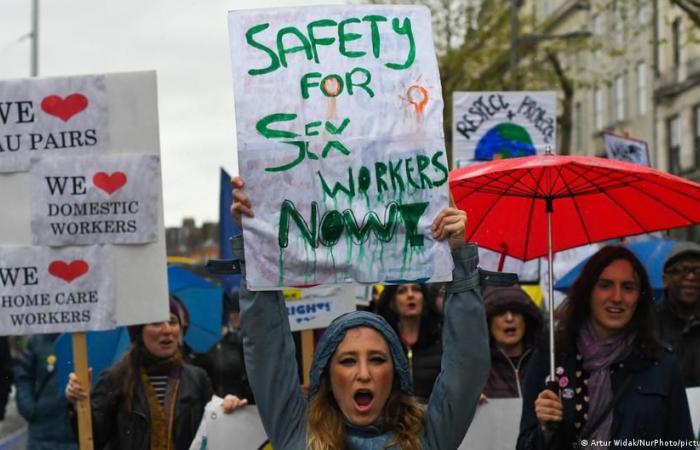 You are now following the details of the Is a ban on buying sex work effective? Sex workers say ‘no’ news and now we leave you with the details

Mohamed Nass - Cairo - Sex work. The issue of whether a country should criminalize the industry is a polarizing one — and no less in France. In 2016, lawmakers banned the purchase of sex, but not the sale of it.

Today, clients face up to €1,500 ($1,700) in fines for a first-time offense, as well as a €3,750 fine for a repeated offense. Lawmakers at the time hailed the measure as a means to end prostitution and human trafficking while protecting sex workers.

Five years on, however, sex workers say they are in more danger than before.

Cybele Lesperance, a sex worker and activist based in Chambery, in southeastern France, was one of dozens of protesters across three cities on Tuesday who demonstrated against the bill. The 39-year-old, a Canadian native, said that demand for sex work is lower — but notes that sex workers find themselves in more precarious situations than ever before. Part of this, activists say, is because when the purchase of sex services is banned, those who tend to obey the law avoid seeking these services — and that those who dare to circumvent the law are often delinquents with a criminal history.

While the bill aims to empower sex workers, those in the industry say the buyer and provider are not on equal footing. They say the power has shifted to the client, who often demands riskier practices or unusually low rates.

“We have people that say, ‘Hey, I’m criminalized now and I’m taking the risk — you should make the effort.’ Or they say they know that I don’t have many clients. And now with COVID the law is worse. There are more threats and verbal violence and more threats to publish your personal data onto the internet,” said Lesperance.

This is backed by a December 2020 evaluation by researchers at the Sciences Po institute of political studies in Paris, which examined the prostitution act’s “failure” when it comes to power relations between sex workers and clients.

More than 10 sex workers were killed in the six months leading up to February 2020, according to a sex workers’ rights group.

French Senator Annick Billon, a centrist lawmaker and president of the delegation for women’s rights, told DW that around 5,000 fines have been levied against buyers in France since 2016, “which is very little compared to the number of prostitutes estimated at 40,000.”

Moreover, 564 people have taken part in support programs that help sex workers exit the industry, but only 161 sex workers completed the process.

Billon argues that more financial resources need to be dedicated to implementing the current law. “There is a lack of human [police, social workers] and financial resources to support prostitutes for administrative formalities, protect them, enable them to undergo professional training and have the resources to live,” she said in a statement to DW. “There’s also a lack of political commitment.”

‘No credible evidence’ on link to human trafficking

Many activists seeking to end prostitution say the sex services industry should be criminalized in a bid to thwart human trafficking. But studies and anti-human trafficking organizations, like La Strada International, have rejected this stance, saying there is “no credible evidence” to support the theory.

La Strada International, however, has said the available evidence suggests such laws place consenting sex workers at higher risk, and that there appears to be a double standard in how industries are regulated.

“When it comes to labor exploitation, for example, exploitation of agricultural workers and domestic workers — regardless whether they work here legally or not — people seem to say, ‘Yes, we should give them rights to reduce exploitation, we should regulate their work and empower them.’ But the moment you start to talk about sex workers, it suddenly seems to be a different issue,” Suzanne Hoff, international coordinator for La Strada International, told DW.

Is the Swedish model effective?

France’s 2016 reform on prostitution was inspired by Sweden, which in 1999 was the first country in the world to criminalize the purchase of sex but not the sale.

Some sex workers in Ireland, which adopted the so-called Nordic model in 2017, and in Sweden told DW that they, too, have been forced into more precarious conditions to make a living.

There are limited independent studies available on the impact of the law. The Swedish government reviewed its policy in 2010 and found that street prostitution had been reduced by half. “This reduction may be considered to be a direct result of the criminalization of sex purchases,” it said. Sex workers, however, say their services simply moved indoors or were made available through clandestine and precarious situations.

A 2015 report by the Swedish Association for Sexuality Education found that evidence of the desired effects of the legislation was “weak” and that the law had contributed to “unintended consequences.”

That same year, University of Cambridge researcher Jay Levy published a 255-page book after years of research, arguing that “while Sweden has been unsuccessful in achieving its aim to eliminate (or even demonstrably diminish) prostitution, it is, in fact, clear that there have been adverse material effects of Swedish abolitionism.”

“Other nations will no doubt continue to look to Sweden when drafting or proposing prostitutional law and policy. They would do well, though, to learn the real lessons of the Swedish model.”

Human rights group Amnesty International in 2016 issued a policy on sex work, declaring that to protect sex workers’ rights “it is necessary not only to repeal laws which criminalize the sale of sex, but also to repeal those which make the buying of sex from consenting adults or the organization of sex work (such as prohibitions on renting premises for sex work) a criminal offense.”

A bid to have the ban on buying sex overturned was rejected by France’s top constitutional court in 2019. But the matter could be decided by the European Court of Human Rights, which is currently reviewing the case.

Lesperance is one of the more than 260 people of various nationalities who have filed a complaint with the court. For her, the goal is simple. “We could ask for compensation, but what we see is that this bill is a crime against sex workers,” she said.

“This kind of policy is so bad that I want to make sure that other European countries are sent the message that human rights are being denied with such a law.”

IMAGE: Sex workers in Ireland, which has banned buying sex services since 2017, have called for safer conditions. Artur Widak/NurPhoto/Picture alliance

These were the details of the news Is a ban on buying sex work effective? Sex workers say ‘no’ for this day. We hope that we have succeeded by giving you the full details and information. To follow all our news, you can subscribe to the alerts system or to one of our different systems to provide you with all that is new.