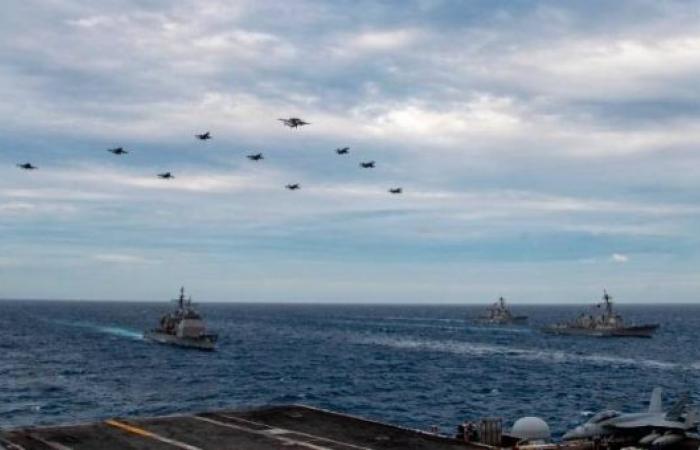 Beijing reacted harshly seven months ago when the US deployed two carrier strike groups there, the first time in six years that two carriers had operated in tandem in the South China Sea.

In a speech Thursday, Biden described China as the US' "most serious competitor" and outlined plans to confront Beijing's "attack on human rights, intellectual property, and global governance."

And in an interview with CBS News on Sunday, Biden said Washington was in "extreme competition" with China.

But Biden and officials in his administration have pledged to work with US allies when it comes to countering Beijing.

"I'm not going to do it the way Trump did," Biden said of his predecessor's administration, which often made policy regarding China without consulting regional players and organizations.

"We're going to focus on international rules of the road," Biden told CBS.

The US Navy says it has been following international rules on two occasions in the past week as it challenges Chinese claims in the Pacific. Last Thursday, the US Navy sent the guided-missile destroyer USS John S McCain through the Taiwan Strait, which separates China from self-governed Taiwan. On Friday, the same warship steamed near the

Friday's so-called freedom of navigation operation near the Paracels "upheld the rights, freedoms and lawful uses of the sea recognized in international law," a US Navy statement said.

US Rear Adm. Doug Verissimo, commander, Carrier Strike Group Nine, led by the Roosevelt, said Tuesday's dual carrier operation was performed "to ensure that we are tactically proficient to meet the challenge of maintaining peace and we are able to continue to show our partners and allies in the region that we are committed to promoting a free and open Indo-Pacific."

Since assuming office on January 20, the Biden administration has reaffirmed its commitment to US allies and partners in the region, specifically letting the Philippines and Japan know that their islands also claimed by China are covered by mutual defense treaties that obligates Washington to defend them. — Courtesy CNN

These were the details of the news Two US Navy aircraft carriers conduct South China Sea drills for this day. We hope that we have succeeded by giving you the full details and information. To follow all our news, you can subscribe to the alerts system or to one of our different systems to provide you with all that is new.