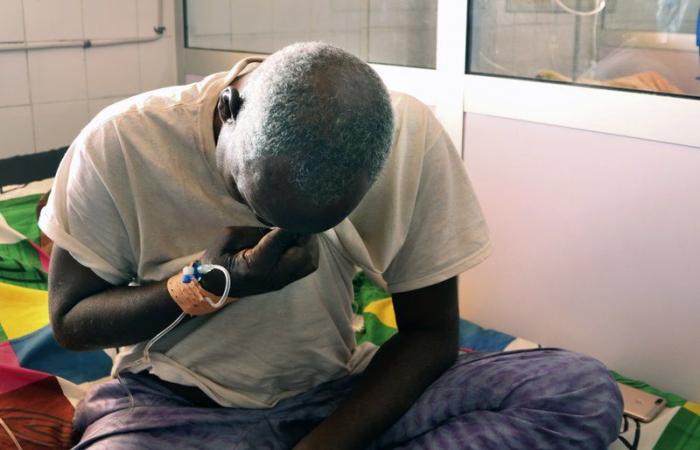 Mohamed Nass - Cairo - OUAGADOUGOU, Burkina Faso (AP) — For nearly a year, Ousseni Yanogo thought he was doing everything he could to protect himself from the coronavirus. The 63-year-old retired gendarme diligently wore a mask, washed his hands and stayed a safe distance from other adults.

When he held hands with his granddaughter to sing happy birthday when she turned 6, he never imagined he’d find himself fighting to survive in a coronavirus isolation ward weeks later.

“I didn’t know contact (with children) was that dangerous, otherwise I wouldn’t have allowed the party to be organized,” Yanogo said while seated on his bed at the Bogodogo Medical Teaching Hospital in Ouagadougou, the capital of the West African country of roughly 20 million.

After managing to avoid a catastrophic first wave of virus for various reasons, including that its figures were almost surely undercounted, the conflict-riddled nation, like much of Africa, is trying to cope with a much deadlier second wave. Although Burkina Faso’s virus figures are still relatively small compared to those in many parts of the world, officials worry that a general lack of understanding and adherence to basic safeguards will make it hard to rein in and could overwhelm the country’s already strained health system.

When the pandemic started, Burkina Faso was already suffering from a humanitarian crisis fueled by conflict involving Islamic militants, the army and local defense groups that has displaced more than a million people, pushed hundreds of thousands to the brink of starvation and forced the closure of more than 130 health centers in the country roughly the size of Colorado, according to government and aid groups.

As of Sunday, the government had recorded 11,227 COVID-19 cases, since the pandemic started, according to the Africa Centers for Disease Control and Prevention. But since the beginning of December, the average number of daily cases has shot up nearly ninefold, from 15 to 130. The death toll has similarly spiked, from 68 at the end of November to 134 and counting. And while mass vaccinations are underway in some parts of the world and are already being credited with helping keep the disease from spreading as quickly, they aren’t expected to start in Burkina Faso until next month at the earliest.

“We’re concerned that in the upcoming weeks or months, the curve might not decrease like in the past. The virus is deep inside the community,” said Chivanot Afavi, a supervising nurse with The Alliance for International Medical Action, an international aid group working on the front lines of the coronavirus response. People are not taking the proper precautions and don’t seem to be worried about the disease, he said.

If the upward trend isn’t reversed, the government warns that the country’s hospitals could be overrun.

“If we don’t manage to decrease the number of new cases, the risks are an increase in severe cases, which could lead to the inundation of hospitals’ capacity to ensure the care of severe patients, resulting in an increase in harm linked to the disease and maybe an increase in mortality,” said Dr. Brice Bicaba, an epidemiologist in charge of coordinating the country’s coronavirus response.

During a rare visit Thursday to the Bogodogo hospital’s coronavirus ward, there were only four patients. But when the secluded wing is full, which it has been for most of the past few months, there are generally four staff members to tend to 11 patients.

Workers told The Associated Press they were understaffed and overworked, and that the surge has taken an emotional toll. Last week, three patients died on the same day.

Health experts worry that as COVID-19 cases and deaths rise, doctors and nurses will be diverted from treating patients with the country’s endemic diseases.

“If this second wave of COVID-19 cases continues to rise, the additional strain placed on Burkina’s health system, already weakened by the first wave and ongoing conflict, can likely increase disability and death from other causes such as malaria, malnutrition and other respiratory infections,” said Donald Brooks, chief executive officer of Initiative: Eau, a U.S. aid group focused on water and sanitation that has been assisting in Burkina Faso’s pandemic response.

Once it begins, the vaccine rollout will also likely use resources the country can’t afford to reallocate, he said.

On Wednesday, COVAX, a global effort aimed at helping lower-income countries obtain shots, announced plans for an initial distribution of 100 million doses worldwide by the end of March. If certain criteria are fulfilled and the vaccine is approved by the World Health Organization, Burkina Faso could receive 1.6 million doses of the AstraZeneca vaccine within weeks.

While the country prepares for the vaccine’s arrival, those treating the virus and suffering from it are calling on their communities to take it more seriously.

Yanogo said when he started coughing and having trouble breathing after his granddaughter’s party, his son took him to a private clinic, where he tested positive and was then transferred to the public facility, where severe cases are taken. While his hospital stay and general medical care is free, patients have to pay out of pocket for tests such as X-rays and medicines that aren’t available at the hospital. Since getting sick, Yanogo’s been forced to ask relatives and friends to help pay approximately $360 for his care, which includes daily oxygen therapy.

“It’s hard for me. Many relatives contributed and friends contributed. I used all the money I had,” said Yanogo, who wept softly into his shirt when talking about how touched he was by the support he’s received.

Yanogo said he’s faced tough situations before, but that he’s never confronted anything like COVID-19. He also said he was feeling better and couldn’t wait to get home to his worried family.

“I want to return home because of my wife, my children and everyone,” he said. “As long as I’m here, they are not at ease.”

These were the details of the news Burkina Faso hospitals worry as second COVID-19 wave hits for this day. We hope that we have succeeded by giving you the full details and information. To follow all our news, you can subscribe to the alerts system or to one of our different systems to provide you with all that is new.