Reproduction rate of virus increases in Switzerland, new restrictions have entered into force in France and the Netherlands: information from Sunday January 24 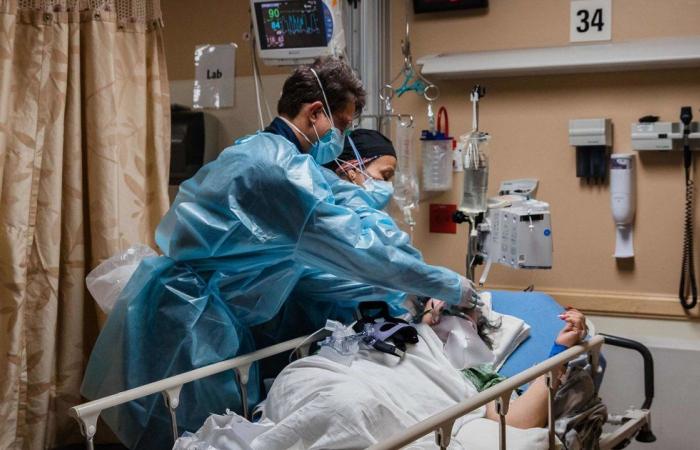 After a slight slowdown in mid-January, the FOPH announces on Sunday a reproduction rate of the virus of 0.89 for January 14, dashing hopes of cutting the number of cases by half every two weeks.

In Switzerland, six party presidents are calling on the Federal Council to set up a real system of border control. To return to France by air and sea, you must now have a negative PCR test.

The Netherlands began their first curfew on Saturday since World War II.

The United States has officially passed the bar of 25 million cases of Covid-19 identified since the start of the pandemic. Egypt has launched its vaccination campaign, a first on the African continent.

Find our followed by Saturday 23 January

The United States officially passed the 25 million Covid-19 case mark on Sunday since the start of the pandemic, a few days after the entry into office of Joe Biden who made the fight against this disease his priority.

Johns Hopkins University, which is the reference, counted 25,003,695 people infected in the morning. More than 417,000 people have also succumbed to Covid-19 in the country, according to the same source.

The United States is the most affected country in the world in absolute terms by the pandemic.

After a peak in the epidemic on January 12, the weekly average of new cases is starting to decline, according to data from the Covid Tracking Project.

The Centers for Disease Prevention and Control (CDC), the main federal public health agency in the United States, now expect between 465,000 and 508,000 Americans to have died from Covid-19 by February 13.

The reproduction rate increases again in Switzerland, to almost 0.9

The pandemic resumed in Switzerland after a slight slowdown in mid-January. After announcing on Friday a reproduction rate (R value) of 0.79 for January 12, the FOPH announced on Sunday a value of 0.89 for January 14.

This development, published on the website of the Federal Office of Public Health (OFSP), destroys the hopes expressed last Friday, namely that the number of cases could be halved every two weeks.

The last time the R-value fell below 0.8 was between November 6 and November 12.

The reproduction rate, which is known after a period of ten days, indicates how many individuals an infected person infects on average. According to that figure, 100 infected people infected 89 others on January 14.

In a joint letter, six party presidents ask the Federal Council to set up a real system of border control to fight against Covid-19. Entry into Switzerland would go through tests and quarantines.

With measures “combating the importation of viruses”, the risks could be massively reduced inside the country, write the party presidents of the SVP, the PS, the Center, the PLR, the Greens and the Greens’ liberals. Both the Sunday view that Sunday newspaper refer to the letter that Keystone-ATS obtained.

The objective would therefore be to be able to deconfin in stages in Switzerland while keeping the number of cases low. This would also prevent further restrictive measures.

According to party presidents, those who want to enter Switzerland – depending on the level of infections in the country of origin – should present a valid PCR test. At airports, we could offer an antigen test, to pay out of pocket. Five days later, another rapid test should be ordered. Until then, those affected should self-quarantine. By land, we could limit ourselves to a word declaration.

A million people have been vaccinated against the coronavirus in France, where stricter border rules came into force on Sunday, an additional measure to try to control the epidemic and avoid a third lockdown.

Presenting a negative PCR test has become mandatory for travelers from the European Union (EU) in French ports and airports.

The obligation to present a negative test carried out 72 hours before has already applied since mid-January to travelers from other countries.

Controls take place mainly in ports and airports. But frontier workers and land transport are exempt. This new measure comes into force while hospital pressure remains strong: Saturday 25,800 patients were hospitalized, including nearly 2,900 in intensive care.

On the vaccine front, Prime Minister Jean Castex was able to rejoice on Saturday that the country crossed the threshold of one million vaccinated against the virus responsible for Covid-19, at least with a first injection. Set for the end of January, this level was crossed four weeks after the start of the French vaccination campaign.

Egypt launched its vaccination campaign against the new coronavirus on Sunday, by administering two doses of the vaccine from the Chinese group Sinopharm to a doctor and a nurse in a hospital in Ismailia in the east of the country.

“Egypt is the first country in (mainland) Africa to have received the vaccine and (…) started a vaccination campaign,” Health Minister Hala Zayed said at a press conference at the Abou Khalifa hospital in Ismailia, one of the first to have received coronavirus patients in the country.

Egypt, the most populous country in the Arab world with some 100 million inhabitants, received its first batches of Sinopharm vaccine in December. According to the Chinese laboratory, this vaccine is 79% effective. “All medical teams will receive the vaccine for free, it is their right,” added Ms. Zayed, after paying tribute to the some 330 doctors who died from Covid-19.

After health personnel, the priority will be the vaccination of “people with chronic diseases and then (of) the elderly”, Egyptian President Abdel Fattah al-Sissi said on Saturday.

New Zealand health authorities said on Sunday they had recorded their first local case of the new coronavirus in more than two months. A 56-year-old woman recently returned from Europe tested positive ten days after undergoing a mandatory two-week quarantine. She had observed symptoms of the new coronavirus several days before being tested.

An active search for contact cases was launched, the woman and her husband having spent several days in the Northland region, in the north of the archipelago, when she was potentially contagious. They would have visited about thirty places. Health Minister Chris Hipkins said it was still too early to decide whether full or partial containment should be put in place again.

■ In Austria as in Switzerland, we continue to ski

Loudspeakers call on skiers wisely aligned to keep their distance and wear an FFP2 mask: apparently, the Austrian resort of Semmering has adapted well to the pandemic. But despite the multitude of precautions, the maintenance of winter sports in the midst of a health crisis bristles more than one. Concerts canceled, museums and restaurants closed, children deprived of class, the government has just extended the third confinement. Rare exception: skiing, an outdoor discipline considered less risky.

Many have been offended in recent days, at the sight of crowd photos at the ski lifts widely shared on social networks, and at the recent discovery of outbreaks of contamination in several stations. While small businesses like Semmering have done their best by attracting Viennese, the large resorts in Tyrol (west), which usually welcome millions of foreign tourists, are largely deserted.

■ Seven-day confinement in the Brazilian state of Amazonas

The state of Amazonas in Brazil, faced with a new wave of Covid-19, decided on Saturday to impose containment and ban the sale of non-essential goods in an attempt to stem a sharp rise in contaminations and deaths .

These new restrictive measures, which follow ten days of nighttime curfew, will be in effect “for seven days from January 25,” local authorities said in a statement. “This is a measure which aims to reduce the regrouping of people, and consequently to break the chain of transmission of the virus”, specified the governor of the State (north-west), Wilson Lima.

During this period of restrictions, only essential businesses will remain open, which will only be able to sell essential products, such as food, hygiene and cleaning products, as well as medicines.

The state of Amazonas, which has 4.2 million inhabitants, suffers from a lack of intensive care units and oxygen.

■ Curfew in the Netherlands

The Netherlands began its first curfew since World War II on Saturday to fight the Covid-19 epidemic. Since 9:00 p.m., it is forbidden to leave your home until 4:30 a.m., the curfew must be renewed every evening at least until February 9. Any offender incurs a fine of 95 euros.

Prime Minister Mark Rutte announced Wednesday his intention to introduce a curfew, before obtaining parliamentary approval the next day. Mr Rutte said the decision to institute a curfew had been bolstered by ‘the UK variant and the very big concerns we all have’, referring to a new, more infectious strain of the disease that has emerged in the Kingdom. -United.

These were the details of the news Reproduction rate of virus increases in Switzerland, new restrictions have entered into force in France and the Netherlands: information from Sunday January 24 for this day. We hope that we have succeeded by giving you the full details and information. To follow all our news, you can subscribe to the alerts system or to one of our different systems to provide you with all that is new.