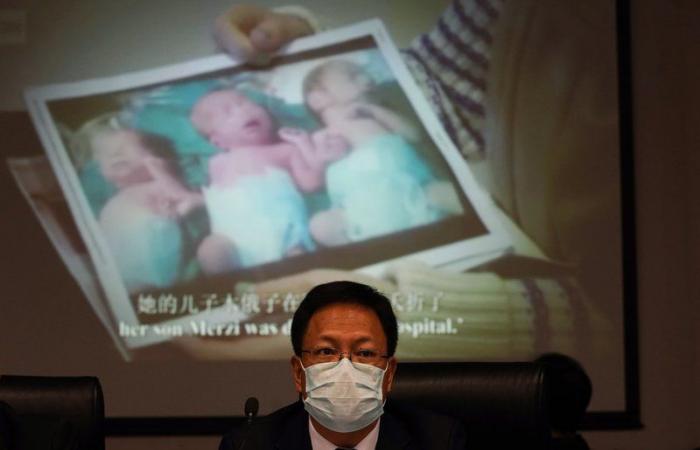 Mohamed Nass - Cairo - BEIJING (AP) — A Chinese official on Monday denied Beijing has imposed coercive birth control measures among Muslim minority women, following an outcry over a tweet by the Chinese Embassy in Washington claiming that government polices had freed women of the Uighur ethnic group from being “baby-making machines.”

Xu Guixiang, a deputy spokesperson for the Xinjiang regional government, told reporters Monday that birth control decisions were made of the person’s own free will and that “no organization or individual can interfere.”

An Associated Press investigation in June found that the Chinese government was forcing draconian birth control measures on Uighurs, Kazakhs, and other ethnic minorities in Xinjiang, including IUD fittings, contraceptives, and even abortions and sterilizations.

The measures are backed by the threat of detention, with parents with three or more children swept into camps and prisons if they’re unable to pay massive fines. As a result, the birth rate in Xinjiang’s minority regions plummeted by over 60% in just three years, even as Beijing eases birth restrictions on the Han population ahead of a looming demographic crisis.

Twitter took down the Chinese Embassy’s Jan. 7 tweet following protests by groups that accuse Beijing of seeking to eradicate Uighur culture. Users complained the tweet was a violation of rules set by Twitter, which is blocked in China along with Facebook and other American social media platforms.

“China’s fascist government is now openly admitting and celebrating its use of concentration camps, forced labor, forced sterilizations and abortions, and other forms of torture to eliminate an ethnic and religious minority,” Nihad Awad, national executive director of The Council on American-Islamic Relations, said in an emailed statement.

China has been waging a years-long campaign against what it calls terrorism and religious fanaticism in Xinjiang and the embassy’s tweet referenced those polices, saying: “Study shows that in the process of eradicating extremism, the minds of Uygur women in Xinjiang were emancipated and gender equality and reproductive health were promoted, making them no longer baby-making machines.”

The tweet cited a study by Li Xiaoxia, a Xinjiang Academy of Social Sciences researcher who has asserted that the birth control measures in Xinjiang are voluntary.

Li’s papers in past years laid the theoretical foundations for justifying mass birth control measures. In one 2017 paper, Li said having many children was a sign of “religious extremism and ethnic separatism.” Li worried that predominantly minority districts were breeding grounds for terrorism, calling it “a big political risk.”

Monday’s news conference was the latest attempt by Beijing to deflect rising international criticism over its policies in Xinjiang, particularly over alleged forced labor and the detention of more than 1 million Uighurs, Kazakhs and others in prison-like centers for political indoctrination. China says the centers are intended to combat extremism and teach job skills, but former residents and rights groups say they target Islam and minority languages and culture.

Elijan Anayat, another regional government spokesperson, said all those at the centers had “graduated” as of October 2019, countering reports that China continues to expand the system.

“With the help of the government, they have achieved stable employment, improved the quality of life and lived a normal life,” Anayat said. “At present, there is no education and training center in Xinjiang.”

Image: Xu Guixiang, a deputy spokesperson for the Xinjiang regional government, looks up near a slide showing a photo of Uighur infants during a press conference to refute accusations of genocide in Beijing, China. The Chinese official on Monday denied Beijing has imposed coercive birth control measures among Muslim minority women, following an outcry over a tweet by the Chinese Embassy in Washington claiming that government polices had freed women of the Uighur ethnic group from being “baby-making machines.” (AP Photo/Ng Han Guan)

These were the details of the news China denies coercive birth control measures in Xinjiang for this day. We hope that we have succeeded by giving you the full details and information. To follow all our news, you can subscribe to the alerts system or to one of our different systems to provide you with all that is new.