The latest about the corona crisis – the number of new... 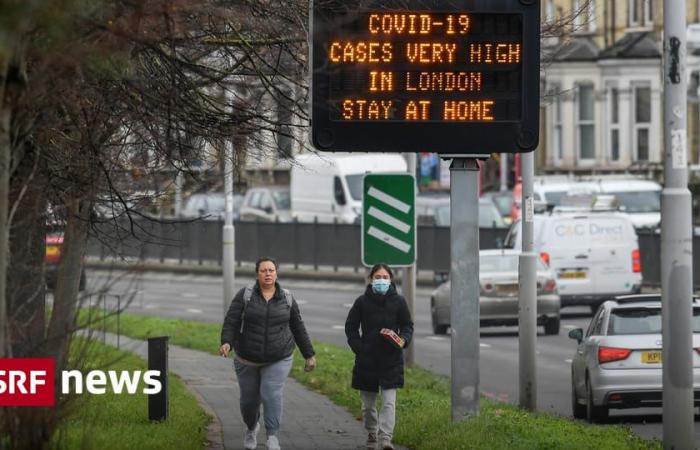 Three weeks ago, Margaret Keenan was the first person in Great Britain to be vaccinated against the coronavirus – now the 91-year-old has received the second dose of the drug. The woman received the vaccination on Tuesday in the central English city of Coventry.

Two doses per person are required for full vaccination protection. “ It’s fantastic to see Margaret Keenan get her second dose of Pfizer Biontech corona vaccine,” tweeted Health Secretary Matt Hancock. “ We will make it through this pandemic together.”

The federal corona credit program has achieved its goals. This is the conclusion of a study by the Swiss National Bank (SNB). Accordingly, the program reached the desired companies without increasingly attracting so-called zombie companies.

The SNB economists count among the zombie companies those companies that have low profitability and are highly indebted, as stated in a working paper, Link opens in a new window write. If federal support programs help such companies to survive, this can have undesirable consequences: These companies tie up resources that can be better used for more productive activities.

The guaranteed loans were mainly used by companies that were firstly hit hard by the lockdown or are active in a region with a high number of cases and secondly had less liquid funds. The program also reached young and small companies that were more exposed to the financial consequences of the pandemic.

This indicates that the program has been successful in terms of its goals, according to the SNB economists. It has reached companies for whom access to external financing options is typically more challenging – especially in a crisis.

After various other high-ranking politicians, the future US Vice President Kamala Harris was vaccinated against the corona virus in front of the cameras. Harris was given his first dose of Moderna vaccine in the US capital Washington on Tuesday. A second dose will follow later.

“I encourage everyone to get vaccinated,” Harris said after the vaccination. “ It is save.” You trust the scientists. “ This is about saving lives,” she warned. The vaccinations are about your own life, but also about the life of your own family and the community around you.

The number of new corona infections in Great Britain continues to rise steeply. Today the authorities recorded a record 53,135 new cases. Only on Monday did they report the highest daily increase since the start of the pandemic, with 41,385 new infections. The rate per 100,000 inhabitants rose to 381.5.

Great Britain is one of the countries in Europe hardest hit by the Corona crisis. So far, almost 2.4 million people across the country have been infected with the virus, tens of thousands have died with or from the lung disease Covid-19.

The canton of Vaud starts the vaccination campaign against the corona virus this Wednesday instead of January 11 as originally planned. The government announced.

Mobile vaccination teams will first vaccinate the residents of retirement and nursing homes and the staff there. In a second phase, particularly vulnerable people who do not live in homes are vaccinated, including people who are 75 years of age and older.

The Zug government council gives the green light: The ski lifts in the canton can start operating again on December 30th. An effective protection concept is a prerequisite for issuing a permit.

Whether and when the individual ski lifts are running again can be found on the respective website, as the health department announced. The government council closed the ski resorts on December 22nd. Now he has reassessed the situation.

Because the epidemiological situation remains tense, the health director appeals to the population to behave cautiously in general and especially on the slopes and to consistently adhere to protection concepts as well as distance and hygiene rules.

The European Union buys an additional 100 million vaccine doses from Pfizer / BioNTech. “ We will have over 300 million doses of this vaccine, which has been classified as safe and effective,” writes EU Commission President Ursula von der Leyen on Twitter.

At first, she does not say when the additional vaccine will be available. The EU initially bought 200 million cans in November with an option for an additional 100 million.

The first 130 citizens of Freiburg are vaccinated

Mobile teams will visit eight nursing homes across the canton by the end of the year. Doctors and pharmacists should also give vaccinations as soon as the type and number of available vaccine doses allow. In addition, two vaccination centers in Freiburg and Bulle will be operational from January 18th.

The first vaccination doses for the Covid 19 vaccination have arrived in the canton. The canton of Solothurn reports that the vaccine is initially only available to a very limited extent. First of all, they want to carry out vaccinations in old people’s and nursing homes across the canton. At the Solothurn vaccination center, people over 75 and high-risk patients are vaccinated. Under 75-year-olds who belong to a high-risk group should first go to the family doctor and be referred by him.

Cases of the mutated virus in Graubünden

A second case of a mutated virus has been detected in Graubünden. That said the canton doctor Marina Jamnicki on the Romansh radio RTR. Specifically, it is about two people who the Graubünden health authorities know that they carry this mutated virus. The two people are related, but came to Switzerland and Graubünden from different countries. The experts therefore assume that they were not infected in the same place.

Thank you for your attention

The federal media conference is now over. Thank you very much for your attention and we will keep you up to date in our ticker.

Register for vaccination even without a computer?

What do people do who don’t have a computer to register for the vaccination, was the final question from a journalist?

Nartey thanks for the important question, one is aware of the problem. It is a priority that older people have access to vaccinations. The cantons would work on that. There are hotlines for these very motivated people who can take up the matter.

A question about the ski areas. Many would reopen with reference to the R value. Ackermann says that the number of cases must be reduced quickly. The risk of infection is small on the slopes, but otherwise there is a high risk of infection there. Mathys adds: “ It is a cantonal decision.” He did not know on what basis the cantons had decided, but he was convinced that the cantons had thought about it carefully.

Is there scope to speed up vaccinations as the UK is doing with the new virus variant? And will more sequencing be carried out to identify the virus variant?

Mathys explains that vaccinations can only be increased if another vaccine is available. “ We have to manage what we have at the moment.”

Regarding the sequencing: Around 1 percent of the positive results are sequenced. This is a very time-consuming process that takes up to three days. But they want to increase that. It remains to be seen where the limits are. Ackermann adds that it is important that the sequences are also combined with the information about the course of the disease – in order to obtain more knowledge. Data protection is problematic.

A journalist wants to know what is known about the mutated virus. In Africa, for example, more young people are said to be infected. Ackermann says that there are still no confirmed findings.

A question about vaccination. “ How is that done? Who has the data? ” Linda Nartey emphasizes that administrative tasks should be easy for everyone. For example, you should be able to make an appointment online. But data protection is very important and is also taken seriously.

You still need more resources for contact tracing, says canton doctor Nartey, Droz adds that the army is not intended for this – but would be ready for action if requested.

No vaccination register in Switzerland

A journalist wants to know whether Switzerland, like Spain, will introduce a register that shows who is vaccinated and who is not. “ No, that won’t happen in Switzerland.”

Mathys cannot say how many Britons are in Switzerland, only how many have entered Switzerland since December 14th, namely around 8000. But he cannot give numbers about British people found or those in quarantine, the cantons are responsible. Regarding a bus for a British man who bragged about his escape from Switzerland on social media, Mathys says that it is difficult to enforce it.

Bring the R value below 0.8

A question for Mr. Ackermann. The R-value should fall below 0.8. “ Are the current measures sufficient?” He says it’s not easy to answer. But Western Switzerland has shown that it is possible with these measures to reduce the value.

Demands on the Federal Council?

What inputs does the task force want to give the Federal Council for its meeting on Wednesday? Mathys sees it as necessary that travel conditions are coordinated across Europe. He does not make any recommendations to the Federal Council. Nor could he say what decisions the government will make tomorrow.

These were the details of the news The latest about the corona crisis – the number of new... for this day. We hope that we have succeeded by giving you the full details and information. To follow all our news, you can subscribe to the alerts system or to one of our different systems to provide you with all that is new.