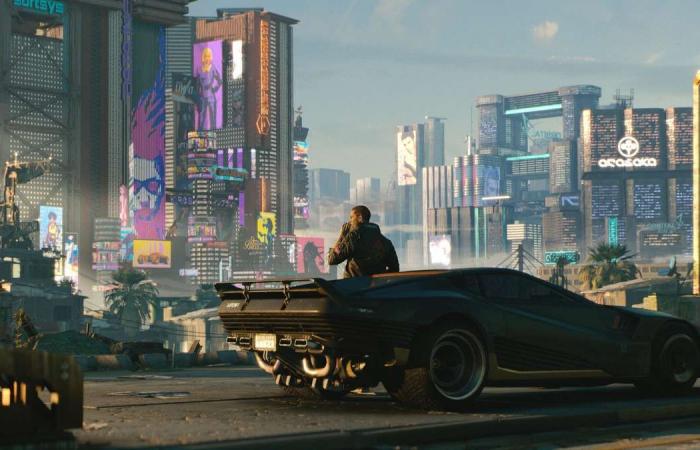 A YouTuber claims that the game world of “Cyberpunk 2077” is supposed to be twice as big as that of “GTA 5” or “The Witcher 3”. We reveal here why this is humbug.

The release of “Cyberpunk 2077 *” is within reach. The first detailed tests are now online. The general conclusion: “Cyberpunk 2077” is almost perfect – a masterpiece with a few quirks. In addition to the reviews, another piece of news has made the rounds in the last few days. The game world around Night City and the Badlands should be much larger than originally assumed. Allegedly, “Cyberpunk 2077” should even surpass “GTA 5” and “The Witcher 3” in this regard. But that is rather unlikely. The game world will probably be smaller – and that’s a good thing.

The claim comes from YouTuber “EdgeRunner Cold”. He has based on a recently presented gameplay video estimated the size of the game world. To do this, he used the coordinates in the photo mode of “Cyberpunk 2077” shown in it. So he came to the conclusion that the “Cyberpunk 2077” game world covers a total of 225 square kilometers. For comparison: “GTA 5” is 105 square kilometers.

Here is the video from “EdgeRunner Cold”:

In the video, the YouTuber explains that his analysis is only about one estimate acts. How accurate this is can only be definitively determined when the game is out. Nonetheless, it is rather unlikelythat the game world really covers 225 square kilometers. CD Projekt had already commented on the size in the past and stated that Night City and the “Badlands” area are smaller than the world of “The Witcher 3”. “EdgeRunner Cold” is also aware of this statement, but nevertheless advocates a larger game world.

But if the map was actually that huge, it would have been mentioned in previous reviews. With “Cyberpunk 2077”, the pure area of ​​the game world is rather secondary anyway. Night City has other propertiesthat clearly sets it apart from Los Santos.

also read: After the “Cyberpunk 2077” release: Will CD project start developing the next “Witcher” part?

“Cyberpunk 2077”: The game world is smaller, but also bigger

„GTA 5“Takes place mostly on the street. Several skyscrapers tower up in downtown Los Santos, but you cannot enter them – except for a few missions. In addition, the possibilities to interact with NPCs are also very limited.

With “Cyberpunk 2077“It will be different. Night City literally pulsates with life. The city offers a much denser atmosphere. In addition, many buildings can actually be entered and explored from the inside. This makes the game world “vertically” larger and filled with much more content. For this reason, how many square kilometers the game world has in total plays a very minor role.

Players will soon be able to get their own picture of Night City and “Cyberpunk 2077”. Am 10. December the game will be released finally, after the release has already been postponed several times. (Ök) * tz.de is part of the nationwide Ippen editorial network.

Interesting too: “Cyberpunk 2077”: Multiplayer mode should not come until 2022 – according to the developers, a game of its own.

These were the details of the news “Cyberpunk 2077”: Game world really twice as big as “GTA 5”? for this day. We hope that we have succeeded by giving you the full details and information. To follow all our news, you can subscribe to the alerts system or to one of our different systems to provide you with all that is new.